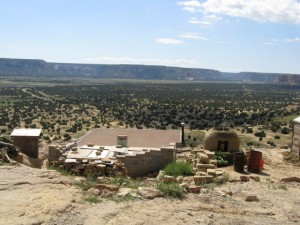 Here is a link to the photos I took at Acoma Sky City.

Some people told me about Acoma Sky City which is about an 80 mile drive west of Albuquerque so I decided to take the drive on Monday morning. This is an old community which lived on a mesa top in the 1100s. The Spanish invaded this land and forced the natives to believe in Christanity, and the Spanish also killed and imprisioned the natives. There is a long history of this community which has been rebuilt and still lives on the mesa top. The Acoma nation is a matriarcial society and the houses pass along to the women of the family. Grandmother to youngest grandchild. Men do not own the houses. 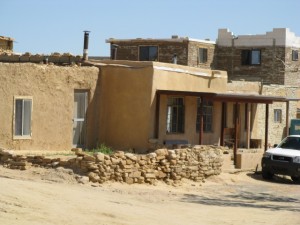 There is no indoor plumbing, running water, or electricity on the mesa. Water is brought up in containers. There are portapotties all alongs the streets or alleys. The natives use propane, wood burning stoves, or lanterns for lighting and cooking. The streets are rock since it’s the top of the mesa, and also dirt. The houses are adobe and you can see the mud mixed with hay that is plastered to the outside of the dwellings at least annually. There is no building code and the houses are added on to as needed. 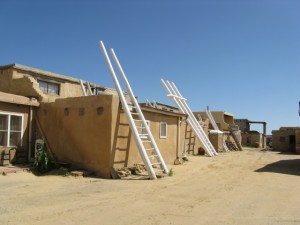 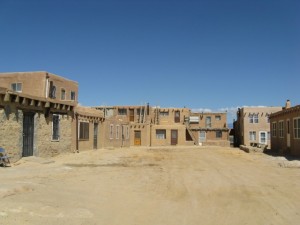 The mission was interesting and no photos were allowed inside. The Spanish made the natives build it over the native ceremonial grounds as a sign of disrespect to the natives.

The walls of the building are 7 to 10 feet thick.  The bell at the top was given to the natives in the 1700s by the King of Spain. There is a cemetary next to the mission and we were told that there are 5 levels of bodies buried and the top layer now will be the last. They have 2 other cemetaries in the valley. 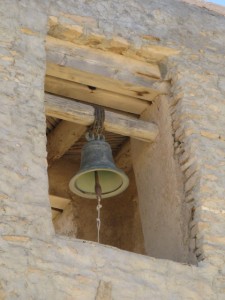 At various points along the paths through the village there were natives selling their handmade and painted pottery pieces. The detail is so small and delicate, it takes hours if not longer to do some of the detail work.  In order to take photos of the rocks, houses, etc. on this tribal land which encompasses over 600,000 acres a permit needed to be purchased at the visitor center along with the tour pass to go up to the Sky City. 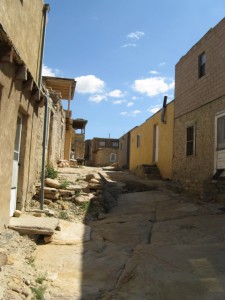 This is a very interesting community of people and they teach the children the customs and language of their people in order to keep the traditions and language alive.  Even though it was a long drive to it and back, it was well worth the trip.

On the way back to Albuquerque I stopped at one of the casino truck stop areas. There was a grocery store that also was an Ace Hardware store. It was interesting to see both together. I went to the deli area and they had fresh ground hamburgers they cooked so I had a bacon, avocado one which tasted good.  Then I walked across the street to Dairy Queen and had a blizzard before driving back to camp for the night.

It was another fun filled, educational, and interesting day.