Well, today is three months I have been traveling and I have driven about 9,200 miles in that time. I’ve been from south Florida to northern Washington and lots inbetween. It’s been quite an experience. I’ve met lots of people and as for what I have seen and done, it has far surpassed anything I could have imagined. I had no expectations for my trip. I knew I wanted to go to Arches and Canyonlands National Parks, Canoe Journey, the Redwood Forest, the Albuquerque Balloon Fiesta, and spend a month in Texas with my friends.  I have seen and done so much more than that and it’s been more than amazing!

This morning I came to a campground on the western side of Albuquerque off of I-40 west which has also been called Old Historic Route 66.  During parts of the roads I have driven I have been on the Old Route 66 and this campground called Enchanted Trails is part of it. Their sign says they have been here since 1950 which is the year I was born. I will be 61 years of age this coming Monday, September 26th. The gift shop at this campground has lots of Route 66 items for display and also for sale, such as old looking glass soda bottles with beverages such as orange soda, etc., key rings, pictures, etc. 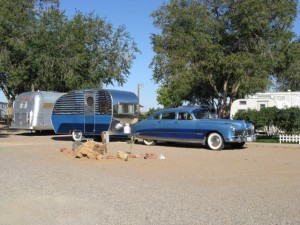 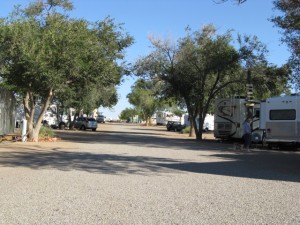 They have an old car and rv in spot number 1, it’s pretty cool looking… see what you think.  There is also a swimming pool and some trees which are a rare thing in RV parks that I have been in the last month or so.

After I got parked, I decided to take a shower and then I got my bucket and sponge and washed my camper. It was SO DIRTY. It rained several days this week and I was driving through some of the rain and it got really dirty. She now looks nice and clean and I could see that she’s white, not brown and white.

There is wi fi here so I decided to update my blog and photos. After I leave here on Thursday I don’t know when I will have internet access again. It might not be until after I leave the balloon event on October 10th.

I will be traveling through Amarillo, TX on my way to Oklahoma City to see my friend Albert Gray Eagle.  I have some friends in Amarillo that I knew from living in Fort Worth. I went online and found my friend Jim who still lives in Amarillo. He was the anesthesiologist who took care of me during my 1992 surgery when I had my ostomy. We have kept in touch periodically over the years. I will stop and see him and his wife when I pass through Amarillo.

Another reason I am staying in this campground is they have washers and dryers so I can do my laundry tomorrow and get my clothes clean and ready for my 18 days without hookups that will begin on Thursday when I leave here. I will fill my water tank, propane tank, and empty my holding tanks so I will be ready. I’m hoping that the propane will last for that long or a few days longer since once I park on September 26th at the balloon park I won’t be moving again until October 10th.

Many of you know that one of my dreams has been to go to this hot air balloon event and to ride in a balloon.  I was talking with some people in Albuquerque when I arrived and told them my dream. They gave me the name of a firefighter named Scott who has a balloon and I called him and he returned my call. I told him who I was and asked if he could use me on his crew and he said yes.  I don’t know what I will be doing, but I am meeting with him on Friday at noon.   I am also volunteering at the Balloon Discovery Center for 3 or 4 shifts of 5 1/2 hours so that should be interesting too.  I’m so looking forward to this experience.  I will update you more when I can.

I will be back in Florida on December 1st, or at least that is my plan for now. I will leave TX about noon on the Saturday of Thanksgiving weekend.