We got to the field at the usual early morning time about 6 a.m.  The winds were really strong and we weren’t sure if flying was possible. We were supposed to go up second wave so we waited and watched the balloons before us inflate. Many took off, but the winds were not very good for flying since they were really strong. We found out later that many pilots had problems landing. Some even hit power lines, thankfully no one got hurt during those incidents. The balloons that landed on the field came down really hard and lots of people came running to help them land. 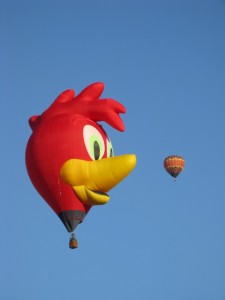 Scott decided we could try to inflate, so we got the balloon out of the bag and turned the big fan on to fill the balloon. Still watching other balloons. After a while Scott and other pilots around us decided not to inflate so we collapsed the balloon and packed it back in the bag. Even though we all wanted to inflate and fly, it was better to be safe. The balloons that were inflated on the field with us were really blowing around and it would be dangerous to fly and then try to land with the strong winds on the ground. We saw some balloons that had damaged their skirt or balloon with burns from where the propane melted the envelope.

Lots of balloons launched on the first wave, so I took pictures of ones I didn’t get the previous days and I posted them in the photo album.

So, after we packed the balloon I went to work at the Balloon Discovery Center. This afternoon they Balloon Fiesta organization had a picnic and free entry into the Albuquerque Zoo for the pilots, crew, volunteers, etc. so I went with some other volunteers. Since I walked the entire zoo last year and took lots of pictures then, I didn’t take many this time. I only went to see the baby giraffes and elephant. 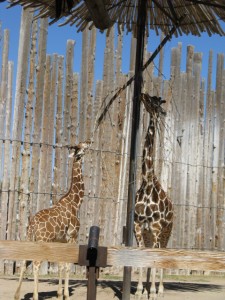 You can see the pictures in last years zoo album.

Last night there was a spectacular sunset, here is a picture I took. 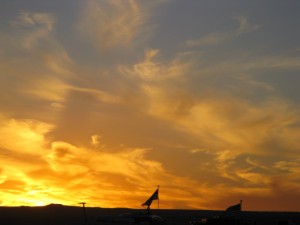