Saturday morning I felt pretty good and decided to drive about 2 hours north to the Thunder on the Beach Pow Wow in Vero Beach, Florida. I knew that many of my friends that are vendors and a few that are performers would be there. Here is an album of my pictures. There are some videos at the end of the album.

In November and December 2013, when I went to Native Rhythms Flute Festival, and the Chambers Farm Pow Wow, I saw many of these friends, but I wanted to see them again. In the winter there are several Native American events, and whenever possible I try to go because this is the only time I get to see my friends that do the pow wows. During the rest of the year they are in northern states. Then we keep in touch by phone or email, but it’s nicer in person. The Native Rhythms website has buttons for vendors and performers, many of which are friends that I have made over the years from attending these events and getting to know them. Feel free to explore their websites to see incredible craftsmanship and listen to talented performers. 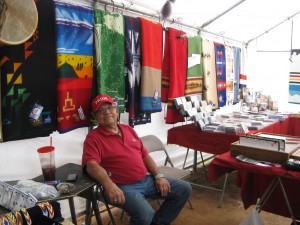 I decided to drive my car rather than my camper because it would take less time. I knew that I could spend the night on my friend Bear’s sofa so I wasn’t concerned about a place to sleep. I arrived at the pow wow about 11 a.m. and I walked where the vendor booths are set up saying hi and exchanging hugs and greetings with my friends. 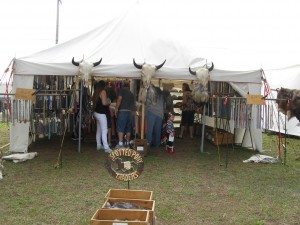 Jeff and Cindy that own Spotted Pony Traders have been my friends for many years. They sell really nice leather, hides, beads, and lots of other items. Sometimes, Cindy stays home to take care of the many animals they have on their farm, so Jeff usually needs someone to give him a break every now and then. Jeff always has very interesting stories of places he has been, and things he has done, including going to Africa and other countries. 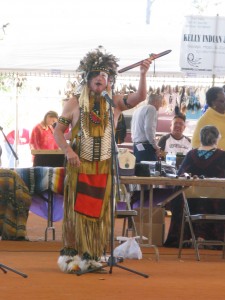 I have known Ed Winddancer for a long time, it’s been great watching him grow as a person and performer. Ed is one of the most entertaining performers that I know. It’s evident when he performs that he thoroughly enjoys it. In addition to playing the Native American flute, he is one of the best storytellers. Ed absolutely loves getting the audience involved in his performance. He’s also great with the children, and his stories always have a message. He also teaches the audience words in his Nanticoke language and has them repeat the words back to him. Years ago, Ed asked me to give him a ride to his hotel, he didn’t have a car or his camper with him for some reason. When we got there, he offered to give me a flute lesson using one of his best flutes. It was made by another one of our friends Utah Farris. I remember sitting in the stairway of the hotel playing this incredible flute. In case you don’t know, staircases are a great place to play an instrument. The sound echoes and sounds different than playing in other places. I’ve heard over the years that several performers play in staircases and similar places because it sounds better, or different. 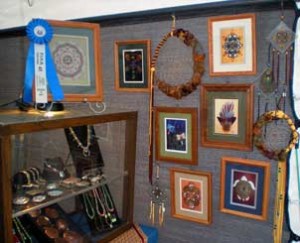 My friends Natalie and Paul are both very talented and creative and interesting to talk with. They own Wild Sage Jewelry.  Natalie makes wonderful soaps, but what I find the most interesting thing is that when time permits, she spends hours creating beautiful artwork using feathers and parts of feathers. Several of her feather pieces have won awards and she always has several hanging in her booth. I love looking at the detail in the designs she creates with feathers. Years ago she told me the process she uses to make them. I used to have several parrots and I saved their feathers, and I also got some from friends that had birds. Since I had all of these feathers, I thought I would try to do some artwork too… never happened. It would have been a nice hobby, but I had too many other things I was involved in. Still, it’s great to be able to admire other people’s creativity and talent. When he has free time, which is not often, Paul makes flutes.

I was pleasantly surprised to see Susan and her husband Dave in their booth. He is a flutemaker, and Susan is now making Sistrums which is an interesting instrument that I had not seen or known about before this weekend. I met Susan at Native Rhythms last November, where she was a committee volunteer. When I needed a ride on the golf cart to the restroom because it was too far to walk, she made sure I had a ride. 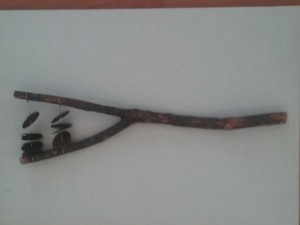 During one of my visits in their booth, I noticed the Sistrum instruments and I picked one up to play. I fell in love with it’s sound, and Susan unexpectedly gave it to me as a gift. I felt so honored and I will think of her and her kindness whenever I play this instrument which is sort of a cross between a rattle and a tambourine. The one Susan gave me has 2 wires with metal discs which creates a slightly different sound than a single one. I looked up Sistrum on the Internet and it says that it’s a sacred instrument that was used in ancient Egypt. Susan makes her own version, and I found out by playing with it that it can sound like a rattle and make a loud sound, or I can move it gently across the palm of my hand and it sounds like a gentle windchime. It’s also made with materials that are being recycled so it’s helping preserve the planet as well. As I walked around the pow wow with the Sistrum in my hands, periodically playing it, several people stopped me and admired it. A few told me that they just bought one too and like me, they like playing it.

Sandi is one of my special friends that I have known for many years that I only see at pow wows. Over the years, we have spent many hours visiting during the pow wows and I love hanging out in her booth where we share stories and laugh, shed tears, and experience whatever spiritual blessings present themselves. Sandi is an exceptionally gifted artist. I’m always amazed at what she can create from items such as bones, seed pods, gourds, and whatever else she comes across that interests her. I think she can find a purpose for absolutely anything. She gave me permission to post photos of her work on my website. If you want to know more about my friend Sandi, you can go to her website. 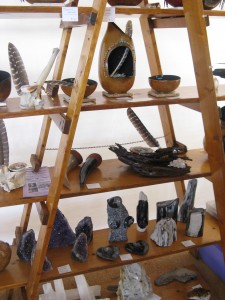 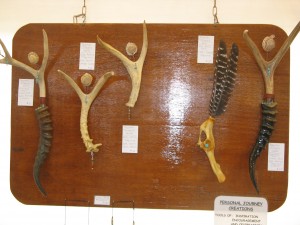 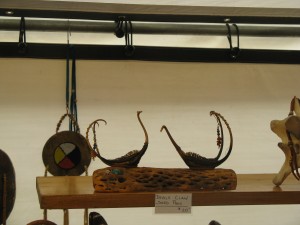 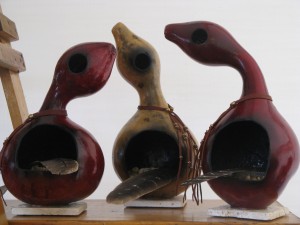 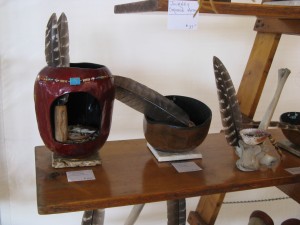 Throughout Saturday and Sunday, I walked around the pow wow grounds visiting with my friends, boothsitting so they could take breaks, and also watching the dancing in the circle. I also met people I didn’t already know, it’s always good to meet new people. I was really surprised when a few people throughout the weekend came up to me and said hello and gave me hugs. They recognized me from the Chambers Farm Pow Wow where it was made public about my health struggles and my courage. Albert Gray Eagle played a special song for me that he wrote and he told my story before he began playing, and Michael Brill and others had a special song played for me at the end of the pow wow when we got to dance in the circle. You can read more about this in the Chambers Farm Pow Wow story.

Another lady came up to me and said hello. She remembered me from the Chambers Farm Pow Wow. I asked her name because I didn’t remember and when she told me her name, she added that I gave her and her husband food at the pow wow. It touched my heart that she remembered me and that she made a point to come say hello and give me a hug.

At the Chambers Pow Wow there was a man named Harry Littlebird III, who has a young son Harry Littlebird IIII, who about 2 or 3 years old and absolutely the cutest little boy. Young Harry has his own regalia and when his father dances, he dances along side or behind him and it’s so cute. Also very touching to watch him dance like his dad, and be proud to wear his regalia and be a part of the dance ceremony and tradition. 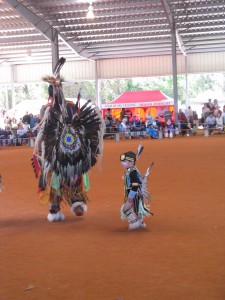 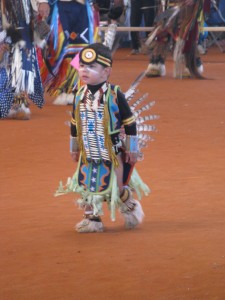 Taking pictures of him was not easy, he didn’t stay still for more than a second or two at a time. By the time I got him in the camera frame and could press the button he was gone. I did get a few short videos of him and his father dancing and a couple of him walking. MVI_2946  There were several young children, both boys and girls, who were wearing traditional regalia and dancing with their parents. It’s heartwarming to see the traditions continuing through future generations. Storytellers help to educate everyone about the customs, traditions, legends, and dances, and they often share their language by teaching us words and ways to greet each other. 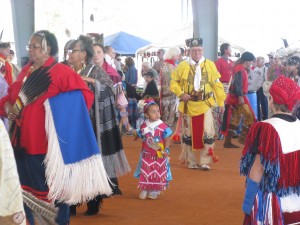 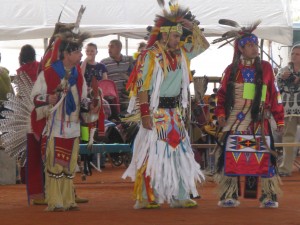 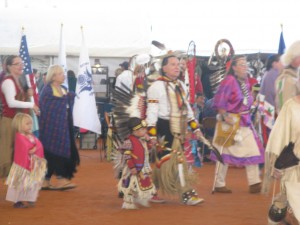 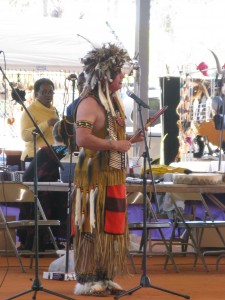 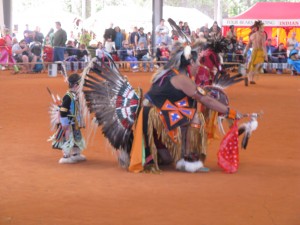 The smells of the different types of food got my tastebuds watering… I loved the smell of the bar-b-que, frybread, and of course kettlecorn. This kettlecorn vendor makes the best kettlecorn. He was parked next to Bear at other pow wows I attended and it was really difficult not to want to eat bags of it. Popcorn is one of the foods that I am not supposed to eat because it doesn’t digest and the kernels cut up my insides, which is really painful. Previous times, I would get a handful of the kettlecorn every few hours, and break apart the soft part from the kernel. This weekend when I got my small handful and started breaking the kernel apart, I thought… I wonder about sucking the flavor of the kernel and seeing what happens. It melted in my mouth. I got the flavor of the sweet and salt, and then I didn’t swallow the hard husk, I put it into a napkin. It seemed to work well. I didn’t know the popcorn would sort of disolve in my mouth, I always thought it had to be chewed and swallowed. I was so happy to find this compromise, and although extremely difficult as always, I resisted buying a bag of it. I was happy to have a handful or two to enjoy. 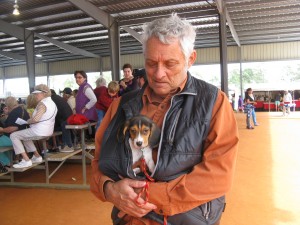 I saw a man with this adorable beagle puppy. I stopped him and asked if I could pet the puppy and take a picture, he said I could. How adorable and soft this little puppy was. So cute.

The pow wow was over late Sunday afternoon, but I decided to spend another night on Bear’s sofa so I would have the extra time to visit with him and others. The FIHA Pow Wow is in Fort Pierce the last weekend of March, and I am planning on going again this year. I try to go every year, it’s one of my favorite events, and another opportunity to visit with my friends before they head north for the summer.

It was really great to be able to take a short trip and have a change of scenery. I did take my medicine so I was not in pain, and I took naps every afternoon. I continue to be grateful that I am still able to get out and about and have more wonderful adventures.