Traveling west on another expedition… time for another journey!!! AND UPDATE as I traveled to Shreveport for hot air balloon rally.

I left home this morning on another journey west. Maybe next year I will leave earlier and head in a different direction… that is if God has it the plan for meto take another long trip. For now, I am blessed and grateful I’m able to take this one.

Getting me and the camper ready for this trip has taken a lot of thought and planning, not so much for the route, but researching ways to keep my camper cooler inside, especially when I am not hooked to electricity which will happen mostly in the beginning of this trip while I am in Shreveport, LA, and east Texas for hot air balloon events. I have dry camped many times in the ten years I have owned my camper van so I know I can do it and survive okay. The difference this year is not having the upper windows to open. This is really the same as dry camping when it’s raining because I couldn’t open those windows when it was raining. In previous posts I wrote about what I have done to try to keep the interior cooler and why. After reading the post when I wrote about figuring out the best way to lay out the window sizes I needed for the sunshade, one of my friends told me that all of my jigsaw puzzle experience helped me figure out the layout. I was thinking about that as I did many layouts for the various sizes I needed. It seems that no experience we have is ever wasted, we use it in many different unrelated ways.

As time passes and as I get wifi I will update my posts or this story on how successful all the things I am trying on this trip are working as far as keeping me comfortable temperature wise. Today I drove about 180 miles and stopped in a campground in Ocala, FL, and I have the air conditioning on. I’m also hoping by being plugged into electricity that my small fridge won’t have to work as hard as it does when it’s not connected.

Every day when I travel and stop for the day I text several friends and let them know my approximate location. A friend told me about a FREE app for the phone called the Life 360 app. It shows a person’s exact location when GPS is on and the people add each other to the app. I did this with one of my friends so she will know my exact location at the end of each day. This is great to keep track of family members, children, etc.

UPDATE… I arrived safely in Shreveport, Louisiana on Tuesday, July 12th. Along the way since I left home, I stopped in a few different RV parks including Percy Quin State Park near McComb, Mississippi, on I-55 which was very nice. This campground also has many nice cabins that can be rented. The weather has been really hot but I stayed in parks that had electric hookups. The first day I had great traveling weather, the second day I drove in and out of heavy rainstorms all day. I averaged about 300 miles a day of driving for four days which got me the distance to Shreveport, LA. I was able to stay at three different campgrounds for two days each in between driving. I didn’t know how far I would be able to drive each day so I left several days down time before the date I needed to be in Shreveport for the Red River Balloon Rally and National Championship in Shreveport.

When I stayed in the Percy Quin State Park, I was able to see the beautiful lake from my campsite and there was a picnic table at my campsite. Since I was going to be there for two days, I decided to work on the sunscreen material for the windows on my camper. I received the necessary suction cups and snaps before leaving home. I ordered clear snaps since my fabric is black, but the company sent white ones since they were out of the clear. I didn’t know until I called to tell them. They said when they get the clear ones they will send them to me. After seeing how much work it was and how much effort it took to put the snaps through the sunscreen material, I may just leave the white snaps in place rather than changing them out. But then again, maybe one day I will change them since they are being shipped to me on my travels. 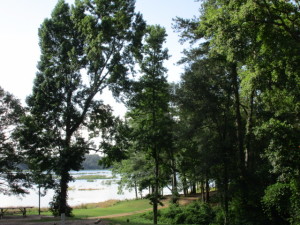 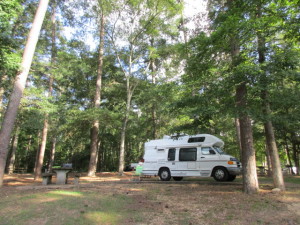 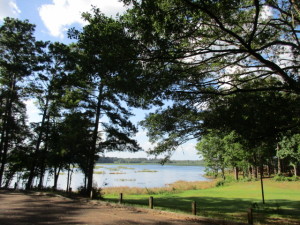 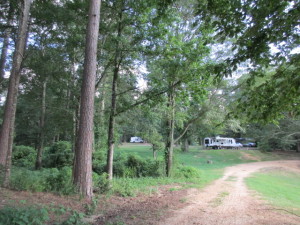 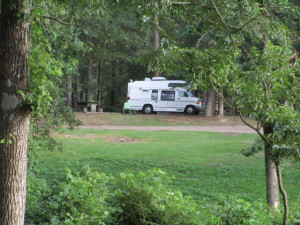 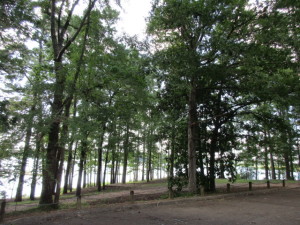 Since I had this really nice big picnic table at my campsite, I held the sunscreen pieces I cut up to each of the windows and attached the top of the sunshade to the top of the window glass and I tried to get it as straight and even as I could. Then I took a nail and inserted it into the screen where it would go into the top of the suction cup where the hole was for the snap, then I separated the fabric more to insert the snap. This was not easy, the screen kept trying to go back into it’s original small square shape. Finally, with much effort, I got all of the snaps inserted into the screen and suction cups, except for the front windshield. I will need some help with that window since the sunshade fabric is 72″ by 29″ and I can’t hold it up by myself and mark where the suction cups and snaps need to go. 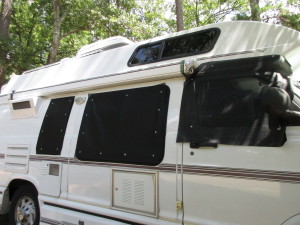 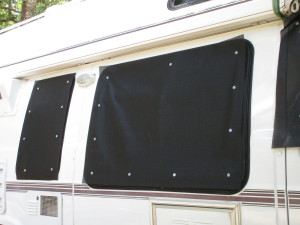 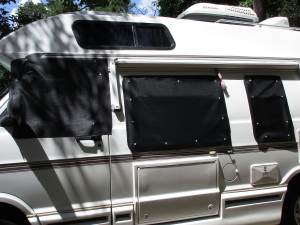 For my upper top windows on the side of the camper that used to open and now are sealed closed, I wrote about that in previous stories, I put the sunscreen on the inside of the window and leave it up all of the time, even when I put the silver reflectix over it to keep the sun out. I really wish I was able to open those upper windows, I really miss having that cross breeze and hearing the sounds of nature when I’m camping, but it’s not meant to be at this time. When I had the sunshade fabric on the driver and passenger windows at the campground I did open those windows to get some air during the daytime. And at the Wyndham Hotel where I am in Shreveport I am opening the windows when I’m inside during the day without the screens. So far I have not had many bugs come inside, other than lots of ants. I put ant traps in the camper so hopefully soon the ants will be gone.

While I am in Shreveport volunteering at the balloon rally, I am parked in the hotel parking lot in a spot that gets shady in the afternoon, it’s on the side of the building and so far no one has told me I can’t park there, thankfully. Otherwise I would have to drive a few miles down the street and park at Walmart and drive back and forth every day which I really don’t want to do since I need to be at the hotel about 5:00 a.m. to meet with the pilot I am assigned to. It has been as high as mid 90’s in my camper. To keep me a bit cooler, I have a small fan that has a USB connection so I plug it into either my auxiliary battery with a 12 volt adapter, or I use an external power supply to run it which allows me a little more flexibility where I can place it since I don’t have to deal with a small length cable. During part of the day I come in the lobby and visit with balloon people, or like now update my website and write stories. I go back into the camper during the day and take a nap when needed.

Also, I have been using my battery operated LED lights that I bought to read which seems to be working well and it keeps the heat down since my regular light bulbs put out a lot of heat. One of the campgrounds I stayed in outside of Shreveport in a town near Homer and Minton, LA is called Kels Kove. It’s a Passport America campground on a nice lake and it has cabins and RV sites. I found a few sites I could use, but it turns out I could not get very level in them, and the ones I could it seems the electric was not working. Finally, I drove around the campground and found a site under a tree that was pretty level. I asked if I could use that spot and even though it was a 50 amp and I only need a 30 amp they let me use it and I have an adapter that would let me connect to the higher amp box. It worked out pretty well for two days. However, other then that location being about 20 miles north of I-20, there was no phone, text, or internet service. I couldn’t even send a text to let my friends know I arrived safely. I tried calling, no call would connect. 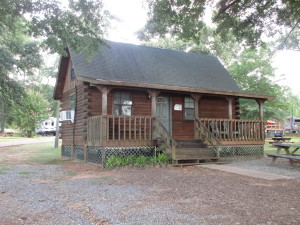 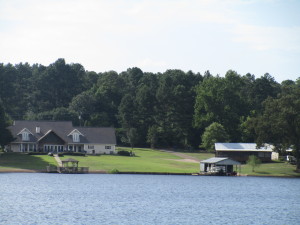 In addition, when I got there and got out of my camper I noticed that the two driver side hubcaps were missing. They were there in the morning when I left the Mississippi state park. Maybe they came off when I was going driving the rough roads with construction near Vicksburg, MS. I don’t know. It seems every trip I lose two hubcaps no matter how well I think they are on the rim. I wrote about the new rims a couple of years ago. When I bought new tires three years ago it was noticed that two of my chrome rims were cracked. The tire store told me that steel rims would be more durable and last better and keep the tires aligned better. So I went with them, and thought hubcaps would work. Evidently, they don’t stay on these rims. When I get home I may go back to the tire place and have them take the tires off and spray paint the rims either black, silver, or white so they look better then the plain steel and then just not use hubcaps. If the hubcaps were going to come off, I wished it was the ones on the passenger side that were not the newer ones, but it is what it is. If that’s all that happens on this trip, I am very grateful and it’s not a big deal. Thankfully, nothing serious has happened. Gas prices seem to be a bit lower as I travel west so I’ve been putting medium grade gas in the camper to help it run a little smoother. While I’m parked at the hotel with no electric, I try to run my generator for about half hour in the afternoon to keep my batteries charged. 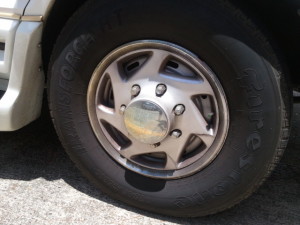 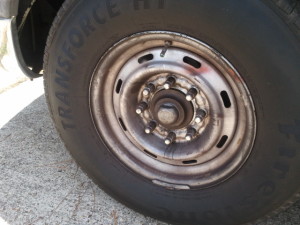 A few months ago I decided that instead of painting my toenails all one color that I would use two colors and do them in different designs each time. It amazes me that I get several comments about the way I paint my toenails, and all comments seem to be positive. So, I took a picture of the way I did them before I left home. Today they will be changed, but I have not decided on the design yet, they will be a medium jade green with turquoise highlights of some type. Maybe just the tips of the nails with the 2nd color. I will see what I feel like when I paint them. That’s about it for this story, I will write about my experience at the Red River Balloon Rally and National Championships in a new post.