Today, Sue, Mark, and I went to the National Cowgirl Hall of Fame in Fort Worth. We were not allowed to take photos inside so I cannot show you anything. Their website is www.cowgirl.net if you want to check out the website. 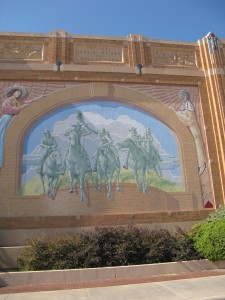 I have not been to this museum before, I don’t think it was built yet when I left Fort Worth. It was really interesting. They showed a short video of how the cowgirl character in Toy Story 2 was developed, and that was pretty interesting. Also, in another theatre there was a short film about cowgirls and the contributions they made.

There are 2 floors of exhibits and memorabilia. They had some boots, hats, belt buckles, clothes, photographs, and other items owned by not only the cowgirls inducted into the Hall of Fame, but also of some people like Annie Oakley, Dale Evans, Gene Autry, Roy Rogers, and many others. I loved reading some of the storyboards and articles abou the people I saw on TV, or read about over the years. Between the first and second floors in the atrium they had hologram pictures of various cowgirls and as we walked around the floor along side the atrium wall we could see the pictures changing. 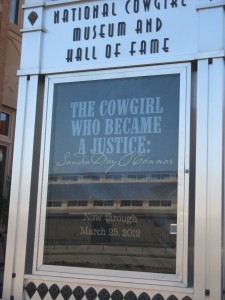 Currently, they have an exhibit of Sanda Day O’Connor who was the first woman to serve on the U.S. Supreme Court. Her family owned the Lazy B Ranch and she was raised on the ranch. the 3,000 square foot exhibit of her pictures, letters, and other memorabilia was very interesting. There was a video playing of her interview for the nomination to the Supreme Court.  Copies of letters were on display of her nomination by President Reagan, confirmation of her appointment, her resignation letter, letters from citizens both congratulating her on her appointment and a few telling her that she should stay home and take care of her family, that women should not be in goverment and in the Supreme Court.

Sandra Day O’Connor was in Fort Worth the day before the exhibit opened to help induct eight women into the Cowgirl Hall of Fame, but we waited a few days after the exhibit was open to go, we thought it would be less crowded. 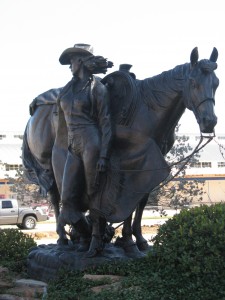