Debbie Macomber is one of my favorite authors. I was blessed to have the opportunity to meet her in person in July 2011 when I was in Washington State on my first long roadtrip. I wrote a story about our visit.

Debbie has a new book that was released today, February 23rd, called A Girl’s Guide to Moving On. It happens to coincide with the Writers Live talk that she had today at a branch of the Palm Beach County Library. Debbie is so popular that the 250 seats that had to be reserved by those of us wanting to attend the presentation were all taken within 30 minutes of when the reserved seating opened. Thankfully, I was one of the lucky ones that was able to get tickets for myself, my mom, and a friend of ours.

We wanted to get a front row seat so we got there early and thankfully, we did get to sit in the front row. Debbie was interviewed by a woman from the Sun Sentinel who asked great questions about Debbie, her writing style, becoming an author, and the background behind some of her books. Debbie also told interesting and funny stories about her life, letters and emails she receives from her readers, and also life experiences that have an influence on the stories she tells in her books. We also learned how and why Debbie’s writing style or story lines have changed over time.

Debbie told us today about a real life experience she had with a friend and how she incorporated it into a story in this new book. I got the book out of the local library yesterday and had started to read it. I was already past the part in the book that she described and it made it more real when she told about that experience and how it came to be in the book.  She also told about how when she was a mother of four young children and she would write stories that when hard times presented themselves financially for her family that she knew she had to write it was her passion and her calling. Even though times were difficult, her husband Wayne supported her in this decision. It took a few years before she sold a book. Debbie told us that either a publisher or editor, I can’t remember which, told her something to the effect… to stop writing that she would never write anything that would sell. I am so glad she listened to her heart and spirit.

We, all of her readers, are so grateful that she followed her heart and the path she knew was right for her. Our lives are richer because of having her stories be a part of our lives. Her female characters are strong role models. Despite tragedy, difficult life experiences, serious health conditions including cancer, death of spouses, and so much more, they are determined to continue on in life and to not only survive and be stronger, but to reach out and help others along the way.

After hearing Debbie talk and tell stories, I realize she could have a new career if she wants one as a comedian. Debbie describes herself as a storyteller. I definitely agree with her, she tells great stories and often adds humor to them, or the way she tells the story and her pauses and expressions also tell part of the story. I, along with everyone in the audience, thoroughly enjoyed the presentation that Debbie gave today. The talk was about 40 minutes long, with time for questions and answers afterward. Time passed quickly, I wish her talk was longer. I know she has so much to share with her audience, but we are grateful for the time we did get to share with her.

I knew as soon as Debbie was finished talking that she would be rushed to a table to sign her books that were for sale. I wanted to say hello and give her a quick hug, so I quickly rushed to the stage and I was lucky that we had a library staff member take a picture of us together. I took several pictures of Debbie both before and during her presentation. What I noticed during the talk was that when the interviewer asked the questions Debbie looked directly at her, however, when she answered the questions, she looked at the audience. 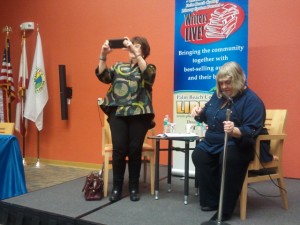 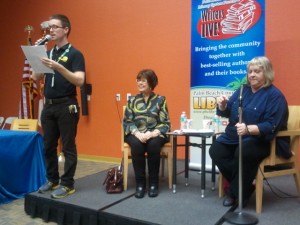 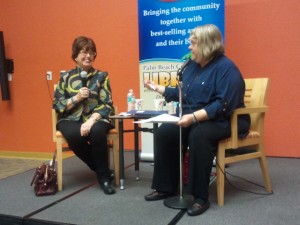 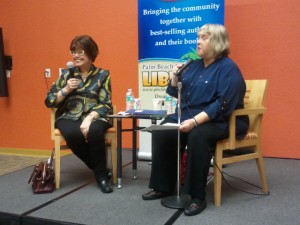 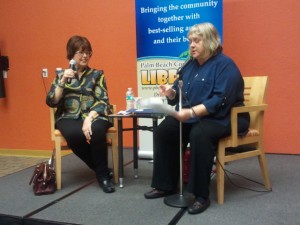 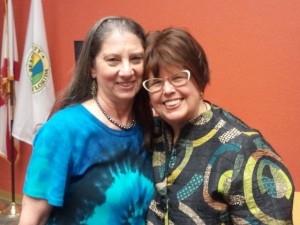 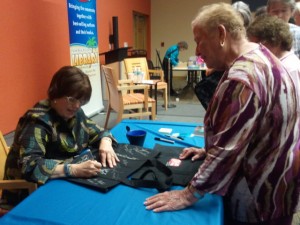 If you have not read any of Debbie’s books please give them a try. If you are like me and many of Debbie’s readers, you will become attached and involved in the characters in her stories. There are several series of books and as time goes on and more books are written in the series we get more invested in the lives of the characters. The Cedar Cove book series was made into a movie for two seasons on the Hallmark Channel. And her Mrs. Miracle books have been made into holiday movies.

One of the librarians at the local library and I exchange books often. She gave me a book called Shade by Calvin Miller. I had not previously read any of his books. In a part of this book a character named Isabel was explaining to Otto about life. I liked what she expressed so I am including it here:

“Isabel sat quietly for a long moment. Otto she said at last, life is hard and swift, swifter than a weaver’s shuttle, says Job. The worse sorts of things happen to the best sorts of people. The trials that come upon us either harden us or they soften us. When they make us brittle, we shatter. When they make us soft, we bend and maybe break a little, but the breaking is what puts the fiber in the tree and makes it stronger. They say that when the highlanders need to find a walking stick, they go high into the mountains where the wind and storms have broken the thin trees so often that the heart of the wood is strong as steel. The highlander never trusts the flimsy, untried wood on the lower slopes. It’s the wood that has fought the storms and lost that is the strongest.”

I have been reading books again, I just finished a few new ones by Debbie Macomber and I also just finished the two newest books by Fern Michaels in her Sisterhood series. I’ve read a few other books in between and I have over 100 books on my bookshelf to be read as time permits. I am planning, or at least hoping to take another trip or two this year. I always take one or two tote bags of books with me and swap them out at various places as I travel. I also have a Nook with a few hundred books in it, but truthfully, I love reading a real book better than an ebook. Ebooks do take up a lot less space in my small camper van, but I still like reading a paper book, especially when I want to go back a few pages or chapters to read something again… or skip forward to see if a character is still in the book near the end of the story.

I finally completed the jigsaw puzzle that my friend Patt sent me of where I live. It was a very difficult and challenging puzzle. I had to look at the picture that looks like an aerial view of the area to determine where each puzzle piece went. Other than a house shaped puzzle piece of where my residence actually is, all the other puzzle pieces were regular shaped pieces. There is a main 3 lane each way road that goes north and south through the area, and there are a few condo buildings scattered along that road. Those pieces were pretty easy to figure out, the rest of the puzzle was difficult. 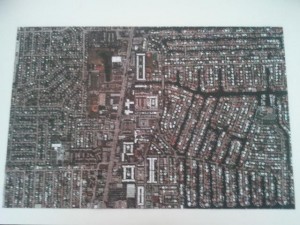 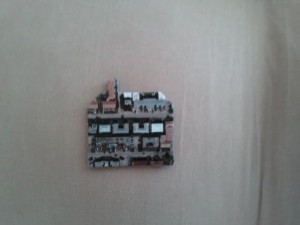 That’s about it for now, my website and stories are now complete. I even finished writing my Albuquerque Balloon Fiesta story.

2 Responses to Author Debbie Macomber, words of wisdom, and jigsaw puzzle of home