I arrived in Cody, WY at about 10:30 a.m. and stopped at the visitor center for info on Yellowstone and Grand Teton National Parks since they are my next stops. I got the reservation number for both parks and I was able to get a campsite for Monday and Tuesday at Yellowstone, and Wednesday and Thursday at Grand Teton. After that, I figured I will see where I will stop next. I thought 3 days at each of these 2 National Parks is sufficient. Yellowstone has had so much snow that many of the campground sites are closed, or they have fewer sites due to snow. In fact, the site I have has snow around it and I can’t even walk outside my camper without stepping in mud from the dirt and melted snow, so I decided to just stay in and type on my computer tonight.

The drive into Yellowstone was amazing!!! A few miles in I could see snow, and mountains that had many trees down like toothpicks tumbling down the mountain. A while later I saw an electronic sign that said: Avalanche Zone No Stopping Next 2 Miles. That made me feel great, especially seeing walls of snow along side of the road and up the mountain. Then I saw signs that said: Watch for falling rocks. Driving further, I could see lots of places where rocks of all sizes must have come down the mountain. I saw some smaller rocks in the lane of traffic, and many large ones on the side of the road. 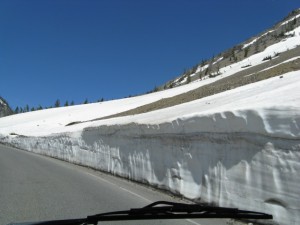 Upon arriving at Canyon Valley in Yellowstone, I checked in at the camper registration desk. The lady that checked me in was from Orlando, FL of all places and she got me a nice pull through site which makes it easy to park. Even though it has mud around it. Many of the campsites have snow and the picnic tables and fire rings are covered in snow. They lend shovels to dig them out. Mine were okay, but it was too muddy to go use them. I am under large pine trees, and there is no electricity or water in any of the Yellowstone campgrounds so it’s quiet time after 8 p.m. 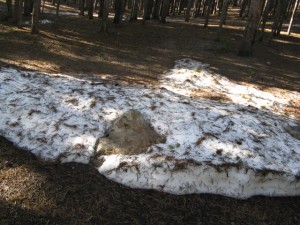 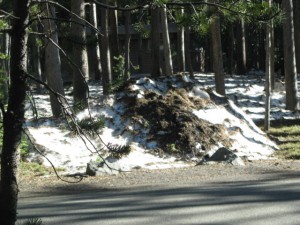 Next, after checking in, I decided to do some exploring and driving around the park. I can’t believe how large this park is. It’s laid out really nicely, it’s like little towns all around the park. Now, even though it might only be 18-20 miles or so between each section, it takes between 45 minutes and an hour to get from point to point. Old Faithful is about 50 miles from where I am camped, but the time shows it will take me about 2 ½ hours to get there. That is barring the unforseen. Which I learned today doesn’t happen. I think it took me about 4 hours to make one loop in the northern part of the park. I got to see buffalo grazing in the prairie, had to stop to take a picture of course.

Then later on, traffic came to a stop when a grizzly bear decided to walk along the side of the road. A little further up the road traffic was stopped for about 10 minutes while a ranger chased a black bear off the road and up the mountain. Then we had to stop for buffalo on the road. It just walked across the road and there were rocky mountains on one side and steep downgrade of a mountain on the other. I don’t know where it came from, must have been walking on the road for a while and then it decided to get off the road. So, traffic continued. I stopped at some hot springs, sulfur springs, scenic overlooks, etc. to make some stops. Many miles I drove in the park today really challenged me and physically strained my body. I think using my foot to brake and slow down so much uses more abdominal muscles. Anyway, if any of you reading this has been here you know what I am trying to describe. Some of the roads are okay and straight and easy. Others are extremely challenging with the tight turns and curves, steep grades both up and down, and not to mention that where the white line on the end of the road is painted, that is the end of the road. It’s straight down the mountain from there. I breathe a bit more comfortably when I see 2 feet of shoulder on the side of the road, or some prairie.

I did not backtrack at all, I drove a large loop of several roads. On the drive back, buffalo were very visable. They always seem to stop traffic either because they are on the road itself, or on the shoulder of the road. It’s really pretty awesome to see these magnificent animals and having them become so numerous in the parks. One time, the buffalo had traffic stopped, I was several vehicles back. He/she kept walking back and forth across the lanes several times while we all watched. Finally after 5 minutes or so, the buffalo walked off the road into the grass and found a patch of dirt and rolled in it for a few minutes, then got up, shook itself off, and then traffic moved again. 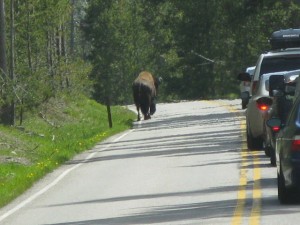 A little further down the road, traffic stopped again while about 5 buffalo walked along the side of the road in a swale area. I was able to snap quick photos of them through the passenger side window. The camera is not on zoom, they were this close to us. They are shedding their winter coats now that the weather is warming up. It got up into the 70’s this afternoon and it felt great. 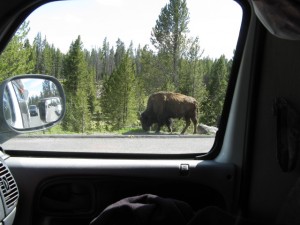 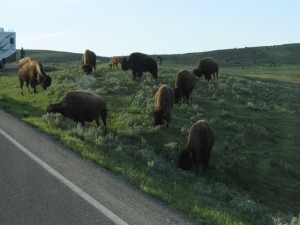 When I got finished driving this afternoon at about 5:30 I was so tired, I laid down and took a nap for about an hour. There is a ranger program tonight talking about wolves, but instead of driving there, I decided to stay in the camper and write the adventures of the last 2 days, and also eat dinner. I’m sure my body appreciates the rest too. Tomorrow, off to Old Faithful and other parts of the park. There is an interesting sounding ranger program at 8:30 a.m. That means I have to start the drive there by 6:15 a.m. Or earlier in case there are some types of wildlife on the road that we need to stop for since they have the right of way. Not sure I will do that, probably just get there when I do and see what’s available at that time if anything. I know from my driving experience today that I don’t want to be driving on any of these roads in the dark!!!