I woke about 5:30 this morning and decided to head towards Old Faithful Geyser. It was early so I was hoping to see some wild animals along the way. I saw hundreds of buffalo today, up close and personal both along the roadside and in the geyser field walking the path around Old Faithful and the other geysers and hot spots, etc. 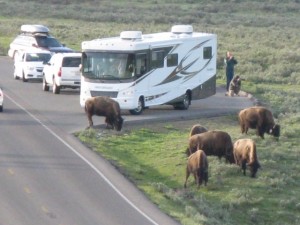 On the drive to Old Faithful, a herd of buffalo were walking across the street so of course, all the cars stopped to watch and let the ones that wanted to cross the street. It was so awesome!!! In many places along the drive a buffalo would just be laying in the grass or dirt next to the side of the road, or there would be one or several just grazing or laying in the grass. It got to be a common site, but I still did not take it for granted. The roads I drove today were not as steep or challenging as the ones yesterday. Thankfully.

I arrived at Old Faithful at 8:30, just as the ranger tour began through the geyser field around Old Faithful. There are many geysers in that area, some active and that shoot up water and steam on a lesser scale. I took lots of pictures, some of the colors of the geyser pools were such a pretty blue. 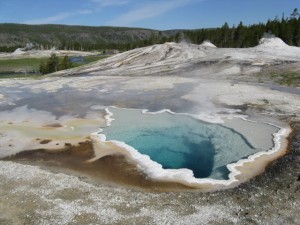 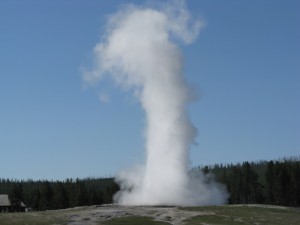 I saw Old Faithful twice, once on the boardwalk from the back side of the geyser, and once sitting on the benches sort of to the side, away from the side where the wind blew it. This was really cool to watch, I could see the steam and spray coming up and the wind blew it to the side and it sort of looked like a white flag waiving against the blue sky. The temperature was in the 70s today which made it really a nice day for the trip. I also walked inside the Old Faithful Inn which is an old historic hotel, it was really amazing to see the inside of this building with the huge stone fireplaces and the logs that make up the ceiling, railings, etc.

I also stopped at Artist’s Point and took pictures of the waterfall in what they call the Yellowstone Grand Canyon.

My generator was not running smoothly last night or today, so I stopped at a service station near my campground and asked if it could be the altitude, since that did affect my check engine light. They told me that the generator needs to be set for high altitude, so I had them do it and show me how to adjust when I come into a lower altitude. I saw how to do it, I knew we had to get under the camper. I think I might pay someone to adjust it down when it needs it, rather than me crawling under it. It’s money well spent.

After my day of walking and driving, I was getting tired and didn’t want to walk or drive anymore. So I stopped at the Canyon Village area where the showers, laundry, and stores are located. I decided a shower sounded really great, so I paid the $3.38 fee and had a nice warm long shower. It was my first one since leaving home the other day. I had washed up in the camper but had not stopped anywhere that had showers and I didn’t want to fill my gray water tank without knowing I could empty it soon. Water is a precious thing in a small camper. After my shower, I treated myself to a huckleberry ice cream sandwich, which tasted great. I then walked around the stores and then came back to my camper and drove the short distance to my camper.

I found a way to park in this spot around the mud and puddles so I could get in and out of the back door. I wanted to sit outside and enjoy the fresh air. No sooner did I sit down then the bugs decided I would make a great feast. I used some bug spray, but that did not seem to deter them. I then thought, I have a pop up screen tent in the camper just for this purpose, so I got it out and set it up. It pops out like one of those window screens for the front window of the car. It worked great! I was able to sit in comfort and not be eaten by bugs. The wind blew through the screen so I had a nice cool breeze. It wasn’t as easy to fold up but I finally figured it out and got it back into its 22 inch bag. I’m sure as I use this tent more, it will be easier to fold.

I’m using my generator to power my laptop and it seems to be running fine now, the adjustment worked. I’m going to make myself a tuna melt in a tortilla for dinner tonight. I have not really cooked a meal yet. I ate out a few times on the road and used my leftovers for meals. Since I’ve been eating a bit later like 6:30 or 7:00 in the evening, rather than my 5:00 time in Florida, I try to eat a little lighter at night and then have a snack a bit later before bedtime which is usually about 9 when it’s getting dark.

Tomorrow, I leave Yellowstone and head down to Grand Teton National Park. Not sure when I will have Internet again, so I am trying to keep current with my journaling. Time is passing and I am not realizing what day of the week or date it is anymore. It’s okay since I don’t have to keep a time schedule. It really feels nice after all the years of living by a clock and calendar. I have not had TV, radio, or newspapers in about a week and I don’t miss it at all.

I will post photos to my website when I have a chance. I am using wi-fi but there is nowhere to plug in my computer, so I am trying for now just to get posts updated.