Because I have been doing a lot of driving, with frequent stops, I’ve noticed how the terrain has been changing. It started out as flat farmland, then prairie, then the sand hills which were gentle rolling hills covered in green grasses where cows grazed.

Today I drove from Alliance, SD to near Custer, SD to visit Wind Cave National Park. I drove through more prairie land, and occasionally I saw deer grazing in the grass, then I saw some antelope along the way too. They looked up when they heard the vehicle, but they just stayed where they were. Driving today, I saw the gentle rolling hills of prairie land change into mountains covered with tall pine trees. Oh, by the way, throughout Nebraska and South Dakota there have been beautiful wildflowers growing along the highways.

As I have been driving, there have been numerous times that I would drive for several hours without seeing any grocery or other kinds of stores. I thought about the houses I saw occasionally and how far they must have to drive to shop, and the gas they would use getting to and from the store. I bet in the winter they really stock up on supplies.

Wind Cave National Park was amazing! I took the tour that went into the upper and lower levels of the cave and I took some photos during the tour which I will be posted on my photo page when you click the link. As I was leaving the Park to go to Jewel Cave National Monument, I saw a herd of bison just about a mile from the Wind Cave Visitor Center. Of course, I had to stop and take some photos. The bison are such magnificent animals. There were many calves in the herd which should show in the pictures. While at the National Park, I was able to get the Access Pass which gives me half off almost all tours, entrance fees, and camping fees in National and Federal Parks. This photo album has pictures I took at these caves and the surrounding area. 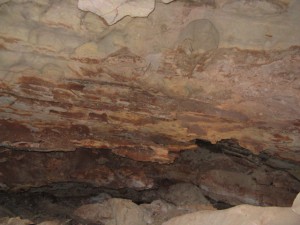 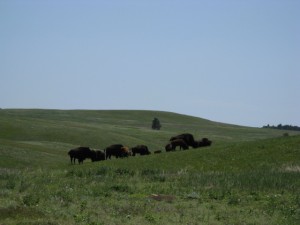 I saw a sign for Crazy Horse Monument, so since I had some time before I needed to be at Jewel Cave, I took a side trip and saw Crazy Horse from the highway. I did not enter the park to see it, I just viewed it from the road and I took a few photos with the camera lens on zoom. It came out pretty good, I was surprised since I was a pretty far distance away. 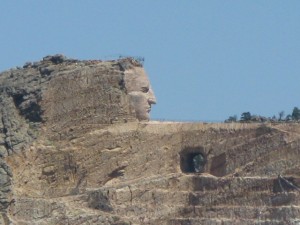 I drove towards Jewel Cave which was about a 40 minute drive from Wind Cave. The terrain changed again, this time really significantly. It became steep mountains covered with tall pine trees. The wildflowers were a beautiful purple, which happens to be my favorite color. I stopped for lunch in the town of Custer and I ate at the Dakota Cowboy Cafe. The food was okay, nothing special, but the décor inside was nice to look at while I waited for my food. There were hundreds of cowboy hats of all sizes, colors, and shapes hung on the ceiling beams. I could tell many of them were worn for quite a while, and others that looked fairly new. There were also pictures of cowboys, native americans, and other western type art pieces.

After lunch, I went in search of a place to wash the bugs off the front of the camper. Window washing was a frequent event on this trip. I’ve been looking for a place to wash the front of the camper for 4 days and finally found a drive through do it yourself carwash today. Since I am short and it’s hard for me to reach the top of the camper, I did the best I could and I got most of the bugs off. Of course, after driving a while longer, there are more to get off next time I find a place.

It was time to head towards Jewel Cave for my scenic tour of the cave. Driving to Jewel Cave I passed streets that had great names like Blue Sky Road and North Pole Road. Can you imagine having one of those as an address, it would be great! While at Wind Cave I made a reservation for a tour of Jewel Cave at 2:40 p.m. I’m glad the park ranger told me to make a reservation since the tours fill up quickly, he called the other park for me. It only cost me $4.50 each for the tours, not a bad value for about an hour and a half below the earth where it was about 53 degrees. Both caves were very different inside as far as the formations. I posted some photos I took inside the caves, but I doubt the photos will show how magnificent it really was inside the cave. 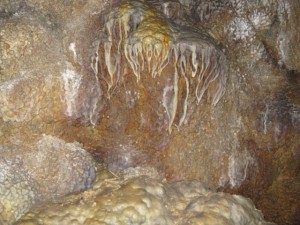 After touring the caves and walking up and down stairs and ramps inside them, I realized how tired I was. I’m guessing not having a regular routine for the last 4 days and driving many, many hours finally caught up with me. So after I left the park, I drove through the town of Custer to Custer State Park which was about a 30 minute drive where I was going to camp, only to find out when I got there that I would have to call an 800 number to see if any campsites were available, they also charge an entrance fee of $15 to enter a SD state park. The attendant at the State Park gate was not very helpful and only said I have to call the 800 number, all he could do is take my $15 entrance fee. I then remembered that someone in my tour group of Jewel Cave told me that her family is staying inside Custer State Park at a National Forestry Park, I told the attendant that I am going to Bismark Park to see if they have any campsites available so he let me in. I found the Bismark camp site host and they had 3 sites left, I took number 16 which is really nice and is surrounded by some nice tall pine trees. 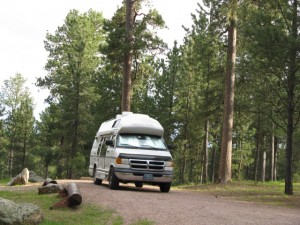 It’s really quiet here, there are no water or electric hookups, no wi-fi, etc. Only a place to park among the trees. I used my generator for a while to charge my laptop so I could type this update to post when I get connected to the Internet. I was able to use my National Park Access Pass so it only is costing $9.50 a night to camp. I am staying two nights, this way, I can do a day tour of Mt. Rushmore tomorrow which is Saturday, June 25th and I can come back here to relax. Custer State Park is really large and I plan on paying the entrance fee tomorrow so I can drive the wildlife tour and see the bison and other animals, and also take the park road to Mt. Rushmore. Supposedly it is very winding and slow going with several tunnels that are one way traffic so vehicles have to take turns going through from either direction. I looked at the width and height restrictions and I am able to fit through all but one tunnel so I will avoid that route.

It just started raining as I am writing this narrative. I started writing it outside and I heard thunder and found the mosquitos were beginning to find me desirable as their meal or snack so I came inside and now it’s raining. I keep thinking I wish some of the rain would be moving down to Florida, it’s needed so badly there and up here they have had too much of it.

I only plan on spending 2 days here, then on to another place farther north. A friend of mine told me some places I need to visit that are Native American spiritual sites so they are going to be next on my list and I will write more as I get there, one is near Sturgis, SD. The big motorcycle event is the beginning of August so I will be gone from this area before thousands of people arrive. I’ll probably find a campground near Sturgis to spend a night, then on to other locations. Time to rest now. My body clock is really off and it needs to find some sort of schedule. It’s not easy. It’s light here about 5 a.m. It gets dark here about 9 p.m. My body clock still thinks it is on Eastern time and having to get up early for work since I have done it for my entire working career. I know it will take time to reset.