On Monday, I arrived at my friend Sue’s house, near Fort Worth, Texas, to stay with her and her husband Mark for a few days. I always enjoy my visit with them. I mentioned to Mark some of the things happening with my camper that needed some repairs, and he graciously made time to fix them for me. He also spent many hours over a few days to try to get my back step to work. Unfortunately, he was not able to fix it, but he did narrow it down to what he thinks the problem is… which is most probably electrical since the motor that puts the steps up and down works when directly connected to a battery. I  bought a sturdy step stool so I could get into the camper and Mark added some wood slats to the bottom to raise it up about 2 inches for me so that it’s a better height.

Wednesday, Sue and I had lunch with my friend Pat and we caught up on life. Last year lightening struck the apartment building where Pat lived and her building burnt and she had to relocate to another apartment. She lost many of her possessions and furniture. I have known both Sue and Pat for about 25 years.

Sue works out at a gym frequently, and on Thursday morning she suggested that I go to the gym with her and I could walk the track while she did her exercises. This worked out great because I bought new sneakers yesterday so I could break them in by walking the track. The sneakers I bought last year hurt my feet when I wear them for a couple of days. It turns out that either my feet grew a size, or the other sneakers were sold to me in the wrong size. When we arrived at the gym I had to sign in and when I went into the office to do that I noticed that the walls were painted with interesting murals. 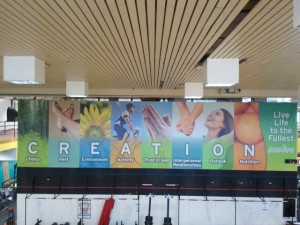 As I was walking the track I saw this banner. Click on it to enlarge and read what it says. Part of it says “Live Life to the Fullest.”

So, after signing in, we get to the gym and as we enter we see a man with no legs receiving stretching exercises by a trainer. I watched him going through his routine while I walked around the track. What an inspiration. His legs were amputated in different locations on both legs. One was below his groin and the other was close to his knee. After he finished his workout and I finished walking the track, I went and talked with him and told him what an inspiration he was to me. I frequently write that there are others with much more serious health issues and problems than I have. Here is a great example. This man’s name is Eddie and he gave me permission to take his picture and to include it on my website. After I took his picture, he said “I have one leg on, and the other across my lap.” I asked if he wanted to put it on and I would take another picture and he said no. Eddie was a joy to talk with, it seems he has a great attitude towards life and he continues to push himself to get to be more mobile and active. He told me is is going on a trip to Wyoming in the near future.

Eddie lost his legs 8 years ago in an accident while he worked for a major airline. I told Eddie about David Nicholson that I met in July 2013 who lost both his legs while serving in Afghanistan. I wrote about David in a story on my website in July 2013. Eddie noticed that like him, David’s legs were amputated in different locations on both legs. Next time I want to feel sorry for myself, I will remember Eddie, David, Parker, Mary Lou, Albert, and so many others who have greater challenges than I do. Look at how big Eddie’s smile is when I asked to take his picture. I admire his attitude towards life and his dedication to continue to work on improving his muscle tone and keep his body fit. 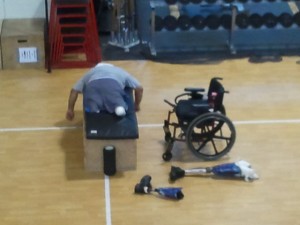 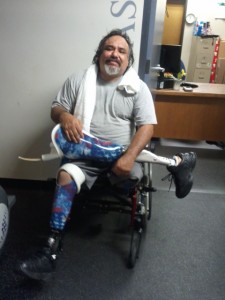 Before I left Florida, I thought it was really hot temperature wise. I forgot how hot it is in Texas this time of the year until I got back here. It’s been about 100+ degrees. The ground is so dry it’s cracked. It’s hard to believe because a few months ago they had so much rain they had flooding in many areas.

I am leaving Sue and Mark’s house on Friday morning, and I don’t know when I will have Internet again. I will post another story when I have Internet and something interesting to write about.

This entry was posted in 2021 Trip. Bookmark the permalink.

2 Responses to Visiting with Friends, meeting Eddie, and Gratitude