Since 40 east connects with I-95 near Daytona Beach, and I was headed south, I decided to stop at one of my favorite restaurants Dixie Crossroads in Titusville. This is about 130 miles from the Chambers Farm Pow Wow in Fort McCoy. I have written about this restaurant several times over the past few years. However, I had not taken any pictures of it. The entire wall on the outside of the restaurant facing the parking lot, and the entire wall when exiting the restaurant, have hand painted murals with various scenes of nature. The inside of the restaurant also has lots of handpainted touches. Over the windows in the main dining room are handpainted valances with different animals, spacecraft, etc. In the middle room, the theme is lighthouses, and the back room has various handpainted underwater scenes with manatees and fish. I took lots of pictures of both the inside and outside of Dixie Crossroads. 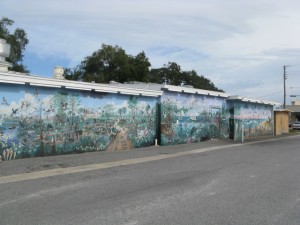 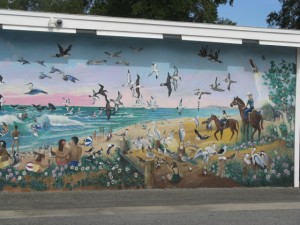 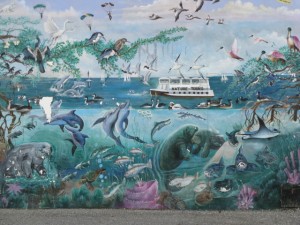 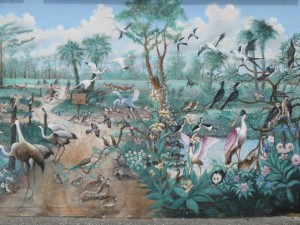 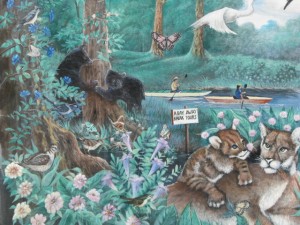 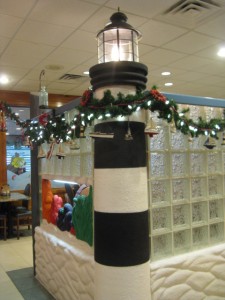 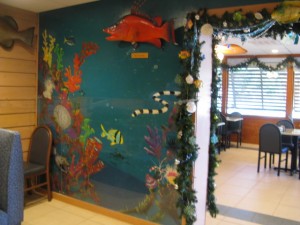 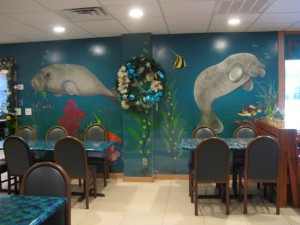 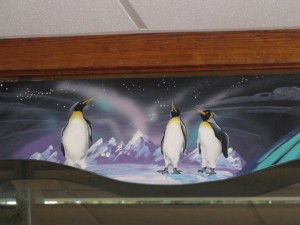 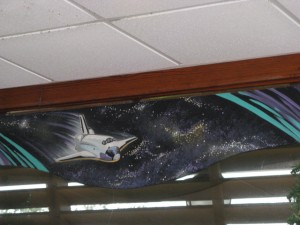 When seated for the meal, a basket of corn fritters with confectioners sugar is served warm. They are so delicious… I always ask for a batch to take with me to eat later. They offer it to customers and many of us take them up on it. The recipe is on the Dixie Crossroads website. I made it from the recipe, and it still tastes the same, the only difference is they have a special machine that makes them round like donut holes and when I make them they look like small pancakes. If you don’t have confectioners sugar, you can put regular sugar in a blender or food processor and it will make confectioners sugar. 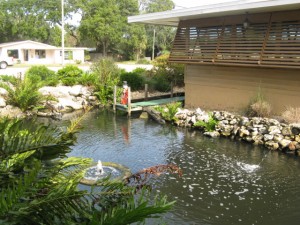 Outside the restaurant is a pond with fish and turtles, so if you sit by a window in the main dining room you can watch them swim as you eat. Dixie Crossroads is exit 220 off of I-95 in Titusville, Florida, then east about 2 miles. It’s a great place to eat if you’re in the area.

After lunch on Monday, I drove to Manatee Hammock Campground where I’ve camped many times before. I love it there. It’s on the Indian River Lagoon across from Kennedy Space Center/Cape Canaveral. I wasn’t ready to go back home yet. Even though I still am in pain and not feeling great all the time, I thought I could relax and take naps, medicine, etc. camping just as well as I could at home. And, by camping, I could sit outside and get fresh air and take walks around the park, sit by the water or under the trees. I stopped at the grocery store and bought some food, and 6 pounds of peanuts to feed the squirrels.

Instead of camping along the fence on the side of the park where I normally do, I camped more towards the middle of the park closer to the recreation center and showers. The squirrels found me and when I sat outside reading a squirrel or two would come over looking for food and to say hello. I started giving them some peanuts and all of a sudden there were about a dozen squirrels all wanting food. I went through about a pound or two of peanuts in a day. I would throw out at least a pound gradually, about a dozen nuts at a time. Some of the squirrels would scamper away a few feet or climb a tree and eat the nut, others would take it and bury it. Then they would come back for more. When I stopped giving them more nuts, some of the squirrels would come sit by my feet, up get on the back step of my camper next to where I was sitting, or the brave ones would get up on my chair when I was sitting in it looking at me with the expression I want more. Every now and then I felt one bounce against the back of my chair. I even gave them some pieces of bread, at first they picked it up and then put it down because it was not a peanut, but some of the squirrels took the bread or sat and ate it where it was. 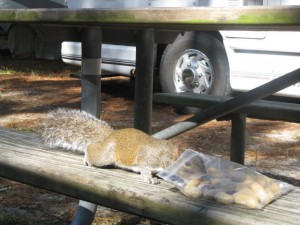 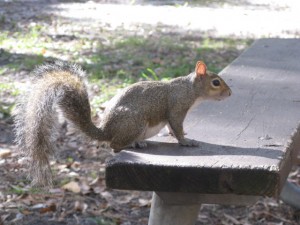 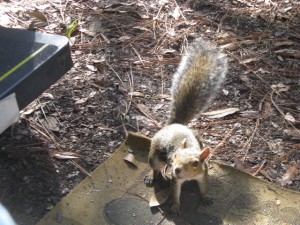 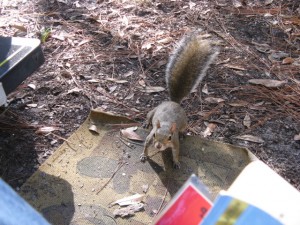 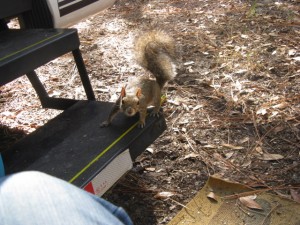 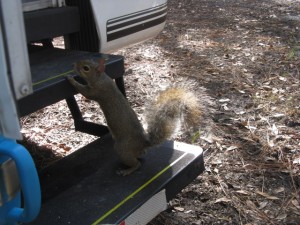 Several times I left peanuts in a baggie or the bag it came in so they would have to get the peanut themselves. That didn’t always work well since some of the squirrels were aggressive and they would chase other squirrels away from the bag so they couldn’t get any. So, I went back to my method of throwing them out into the clearing about 10 feet or so from my camper. I took lots of pictures and also some video clips of the squirrels and rocket launch.

On Wednesday, December 3rd, there was a rocket launched from Cape Kennedy. We were able to watch it from the campground. This rocket sent satellites into space, I don’t know what type. It was really cool to watch it. All we could really see was the burst of light from the launch, then the vapor trail that was beautiful with different colors, and then we saw the various parts of the rocket come off as it ascended. When I was here earlier this year I saw a rocket launch. It looked different from this one, that one carried equipment to the Space Station. 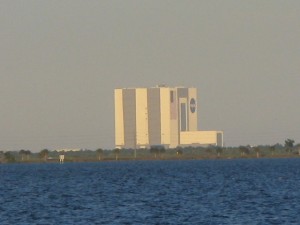 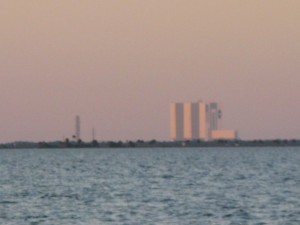 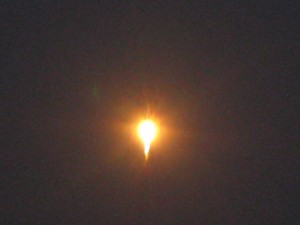 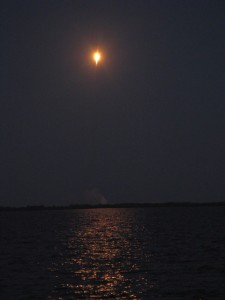 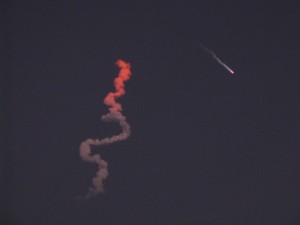 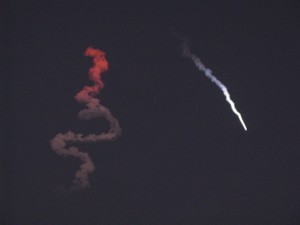 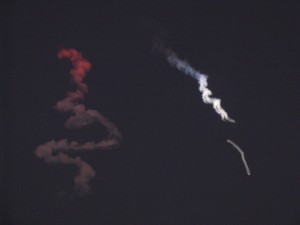 At the pow wow Albert introduced me to his friend Juanita who as it turns out lives in Titusville. She said to call her if I get to Titusville, so I did, and we met two of her friends at a restaurant on Merritt Island for lunch. On our way home from lunch, we drove past Kennedy Space Center and the Visitor Center. We also drove past the Astronaut Hall of Fame. We didn’t stop to get a tour, but I was able to take pictures as we drove by. 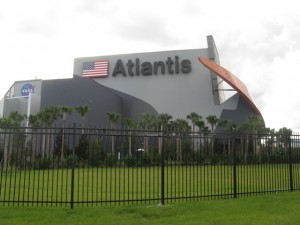 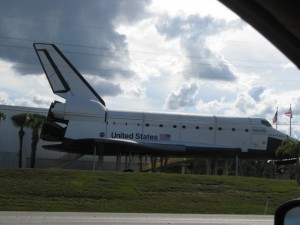 I stayed in Manatee Hammock Campground for a week, then made a decision to come back home. I did pretty well while I was gone on this 2 ½ week trip. I took my medicine at intervals to keep the pain under control, but not enough that I slept a lot. I did take naps several times when I needed to and sometimes I just sat and rested. It felt so great to get away and camp again and to see my friends. I’m glad I went away and had fun. 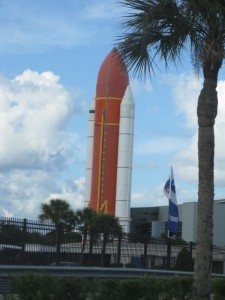 Many of the camp sites had their trailers and campsites decorated for the holidays.  It was pretty walking at night and looking at the lights. One of the campsites had a campfire at night and everyone was invited to sit and listen to the music and enjoy the fellowship. A few men played the keyboards and guitars and we had singalongs. There was all kinds of music being played. The Beatles, Jimmy Buffett, the Eagles, and many more. It was lots of fun. 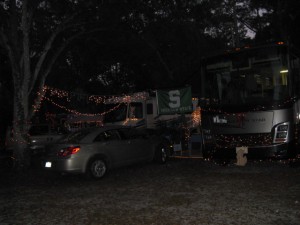 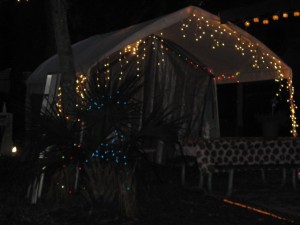 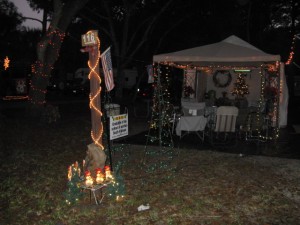 On Wednesday morning, December 11th, I drove towards home. I drove about 1 ½ hours and got tired so I stopped in a rest area and took a nap for about 30 minutes and then continued the drive. That’s one of the great things about having the camper. Many times over the years as I traveled I got tired when I drove and I could safely stop somewhere and take a nap, then get up and continue the trip.

My friend Dale was on vacation in this area, he lives in Maryland, and he came over on Wednesday when I got home and he carried the food, clothes, and other items I packed into my camper, up the stairs into my apartment. It was such a blessing. The drive which was about 200 miles was tough on m and my body. I can’t drive the distances I used to. A few years ago I could drive about 400 or 500 miles in a day fairly easily. Now, I can’t even drive 100 miles comfortably. Some days now, if I’m out for a couple of hours I’m ready to go home and rest.