Saturday, April 16th, was the local Relay For Life event at Quiet Water Park. Here are the photos I took at the event. Friday night we had a really severe thunderstorm with heavy rain and wind. Several of us prayed really hard that the weather on Saturday would be good for our Relay For Life event because the weather forecast predicted rain. Saturday morning it was sunny, as the day progressed clouds began to form and just before the event began we felt a few sprinkles of rain but they quickly stopped. 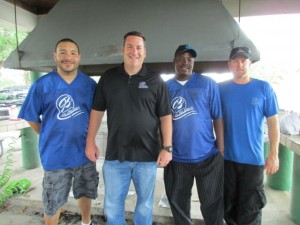 JB’s on the Beach once again provided the survivor dinner. They served a delicious meal which consisted of coleslaw, fruit, cornbread, baked beans, chicken, pulled pork, corn, and bar-b-que ribs. They also serve the ribs at their restaurant, they smoke and slow cook them at the restaurant. JB’s has sponsored this survivor dinner for at least 5 years and we appreciate them very much.

Oceans 234 once again provided lunch for the volunteers and we thank them as well.

When survivors arrive, they register and get their survivor t-shirt, wristband and dinner ticket, and also sign a banner with their handprint showing the year of their diagnosis and each year they attend the Relay. Throughout the dinner music was provided by Acoustic Therapy. The tables were decorated with purple tablecloths and plants in purple pots which added a nice touch of color. This is a special time for survivors and their caregiver to connect with other people that have the same experiences. There was a man sitting all by himself and I went and invited him to join us or to go to a group of people at another table. I suggested that he not sit alone, he decided to join some people at the table next to us and he thanked me later for talking with him and said he enjoyed visiting with the people he sat with and said it was better than sitting alone. His smile was thanks enough.

I was asked to carry one of the survivor handprint banners during the survivor lap, and I felt honored to be asked again this year. I have done this in previous years. This year it was pretty windy so we had to be careful holding the banner so that it would be kept fairly straight. My side of the banner caught most of the wind since it was blowing towards us and I am not much of a wind break. We also had to keep our steps about the same so that the three of us carrying the banner were in a straight line. It was a bit of a challenge at times, but we managed pretty well. We can all always count on Gordon to have a smile and give hugs, and to do whatever is needed to help. During part of the opening ceremony he was watching intently from the sidelines and I was able to get this great photo of him, but it took about 5 minutes because there was a lady standing near him that kept walking back and forth and getting in the picture every time I was ready to press the button.

After dinner I walked several laps stopping occasionally to visit with teams lining the track. On one of my laps I passed a woman who was standing on the side of the track and crying. I asked if she needed a hug and when she said yes I gave her one, and we talked for a while sharing our stories. It reminded me of my first time at Relay when I was crying and someone came up to me and said it looks like I need a hug and gave me one and we walked laps and talked and shared stories as we walked.

The Relay For Life event is often an emotional time for many of us who have been touched by cancer as either a survivor, caregiver, or experiencing the loss of a loved one from cancer. Sharing our stories with one another helps us heal in various ways. Many of us choose to donate our time to Relay by either forming a team, being a committee or team member, being a sponsor, or finding another way to be involved.

I have made some great friends as a result of participating in our local Relay event. I am so very blessed. If I was not involved with Relay I would most probably not have met some of these people who have become close friends that have made my life better for knowing them. Even my mom got involved by helping out with the survivor banners. 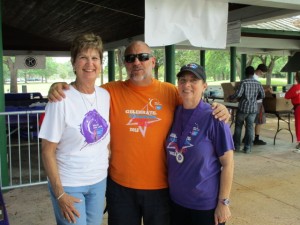 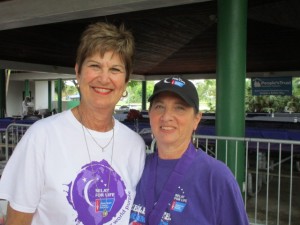 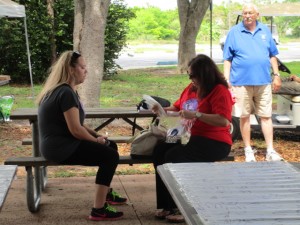 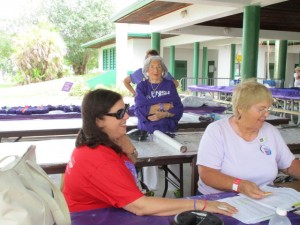 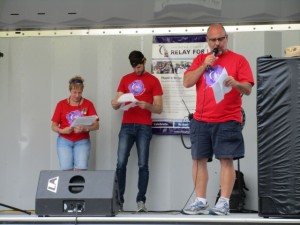 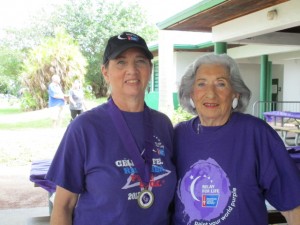 One of the teams was having pig races. The pigs were animated and very cute. Tickets were $1.00 for a race. I think next year this team is going to be buying a large supply of pigs and selling them. They were really drawing a crowd and so many people wanted to buy them. It was funny watching the race. 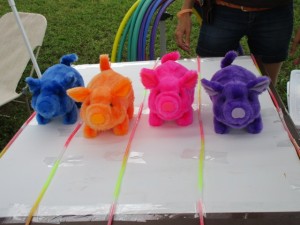 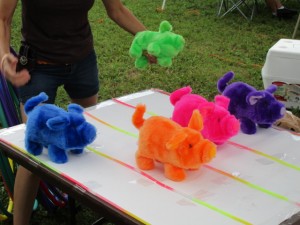 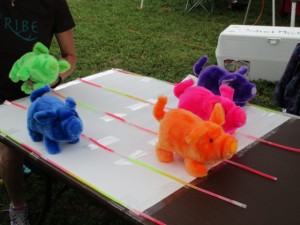 The theme of another team was bats and their tent was decorated with anything bat related including cookies they baked and decorated like bats.

There was entertainment throughout the night, including a Jazzercise session where people of all ages participated. These ladies had lots of energy and they had lots of people up and on their feet exercising. Some people even did a few moves sitting in their chairs. 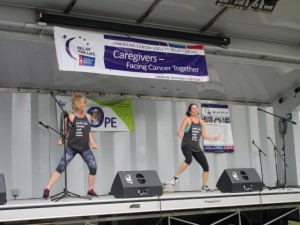 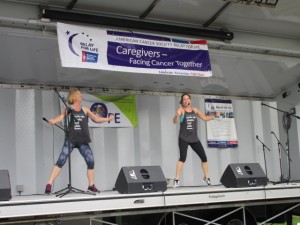 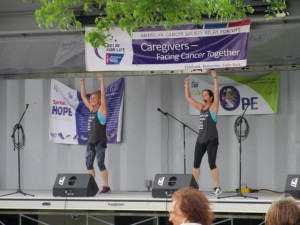 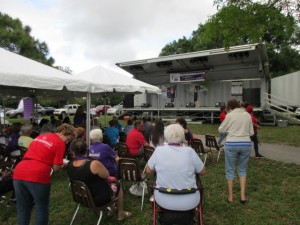 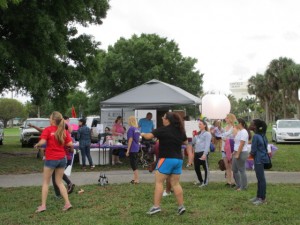 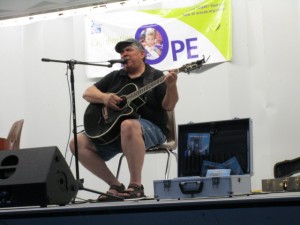 Just as we were getting ready to light the luminaria bags and walk the laps to remember those we lost to cancer or those who survived the fight against this disease, it began to rain. This happened last year too. Sadly, it is not the same to have all of the bags lit in a small area such as under the large awning or on the stage, but the importance of the lap was recognized all the same.  There is no way you can attend a Relay For Life event and not be changed in some way whether large or small. Especially if you experience the Luminaria Ceremony and walk the laps when the only light seen is the candle in the luminaria bags with the names of people either that died or survived written on the bags. 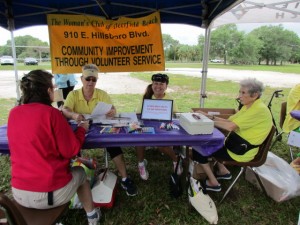 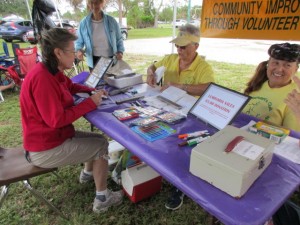 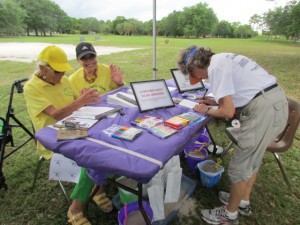 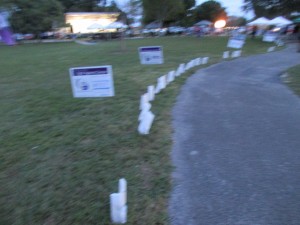 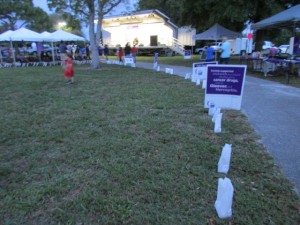 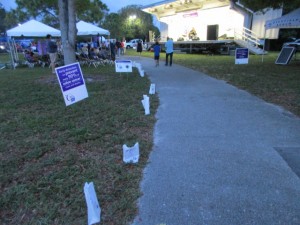 Years ago, before I started my blog, at our Relay one of the teams gave motorcycle rides in the parking lot as a fundraiser for their team. There were long lines for those rides. However, they offered three motorcycles to give survivors a ride for the survivor lap. When they asked who wanted to ride on a Harley for the survivor lap, I immediately raised my hand. It was really cool. I was surprised that not many wanted to do it. I will admit that it felt strange riding the survivor lap rather than walking it. But I was still glad I rode, it was great fun and I did wear a helmet even though we were on a sidewalk and going slow.

If you or someone you know has been touched by cancer in any way, consider participating in a local Relay For Life event where you live. It will change your life. Over the years I have served on several committees for Relay, including being event co-chair. Yes, it does take some of our precious time. However, the rewards we gain from participating and making new friends, meeting new people, and helping those still suffering from loss of loved ones or seeing the hope gained from those being healed makes all the hours we donate to making this event a success and raising money for the fight against cancer and for the programs offered to patients and their families well worth it.

The reward of seeing someone who just lost a loved one to cancer and them knowing they are not alone really touches our hearts. As does sharing our story with another survivor. Giving hope to others whether it’s surviving the loss of a loved one or watching someone heal from their surgery or treatment is very important. It is a blessing to know we are not alone, that others have walked the path we are on now. Make a positive difference in the world any way you can. Occasionally, as I travel on my trips, I have been able to attend Relay For Life events in other states. It’s interesting to see how other Relay’s do things. It’s basically the same such as having tents for each team, selling luminaria bags that line the track, and giving survivors t-shirts. But there are also parts of the event that differ. One Relay I went to used a can of food in the luminaria bag to weight it down, others used sand. Another Relay gave each survivor either a flower or a balloon to carry for the survivor lap. Another Relay I went to had a lap in which local motorcycle clubs paid for the honor of riding a lap. I was surprised when someone at that Relay, which was in Georgia, asked me to ride on a Harley during their bike lap. It was really cool.