Relaxing after balloon rallies and having time with friends in Texas

While it’s lots of fun being at balloon rallies and competitions, we have to get up really early usually 4 or  5 a.m. and we are usually finished about 9 or 10 a.m. depending on where the balloon lands, how long it takes to get to the pilot, pack up, etc. Then I think most of us take a nap. At least I try to a while after I get back. I was at two back to back balloon events, there are no more that I have planned at being at until Albuquerque which is the beginning of October. However, I will be there from the end of August until mid-October so that I can help at the Balloon Fiesta office before the event as well as volunteer and crew during the event.

In the Fort Worth area, I visited my friend Sue for two days and got to see a few other friends that lived nearby while I was there. It was great having time to visit with my close friends that I miss since I don’t live in Texas anymore. we talk on the phone, but it’s not the same. I also got to eat at a few restaurants that I like eating at while I’m there. Not to mention Braum’s where they have the best ice cream!!!

When we were at a grocery store we saw this can of Coca Cola product soda boxes in the format of the Olympic rings, we thought it was very unusual and cool looking so I took pictures of it. Sue and I looked at this display and wondered how someone thought to plan this out and build this display. It must have taken quite a while to design and create this display, especially without the boxes falling. The boxes creating the lettering and circles are protruding a few inches from the boxes that make up the background. 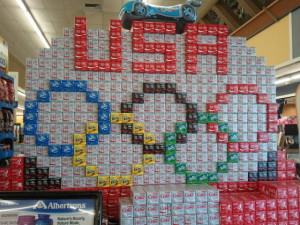 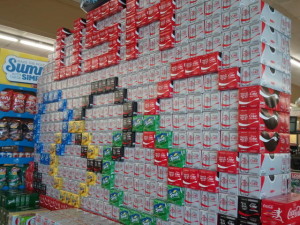 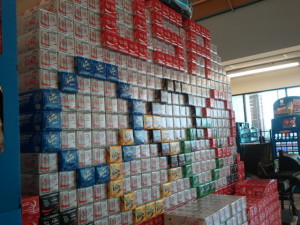 After visiting with my friends in the Fort Worth area, I drove to Waco to see my friends there at the Homestead Heritage community. I was invited to dinner at a few friends houses, and I also helped another friend prepare food for a wedding that was held while I am visiting. I was also unexpectedly invited to the wedding. I love being here and because I have been coming here for a little over 18 years, I have seen many of my friends children grow up, they have also become my friends, and now they have children of their own. I also get to see the younger children grow up and they know me and greet me warmly. It really touches my heart.

My friend Rebeccah who started a cheese business many years ago was in Iowa at the American Cheese Society awards this past week and we found out that she won first, second, and third place in the Brie cheese category, first place in the Blue cheese category, and first place in the Labney cheese category. We are all so very proud of her and happy for her. Many years ago when she first told me that she was starting to make cheese for her family, we had no idea it would develop into the wonder award winning cheese business it has become. Rebeccah and her family moved to Deary, Idaho, a few years ago and they opened a cheese shop and bakery there. They took an old, dilapidated building and remodeled it into a new store. If you are in the area, please stop in and tell them hello and of course buy some of their wonderful foods and gifts.

Saturday, July 30: I don’t have television or listen to the news while I am traveling, I seldom have Internet. I am staying in a campground in Waco about a mile and a half from Homestead Heritage and they have wifi so I am able to update my website and write stories. I figure if something happens that I need to know about someone will let me know. That happened today. I got a text from several friends and a few phone calls about a hot air balloon accident in Lockhart, Texas. My friends didn’t know if I was there or if it was close to where I am. Lockhart is south of Austin which is about two hours south of Waco where I am. It is very sad to hear about any accident, and balloon accidents are not that common. But this accident was especially tragic, 16 people were killed in this accident. It has not been determined what caused this crash yet, the FAA is investigating. I have been at balloon events where accidents happened, but they usually happened off field when pilots were getting ready to land and I didn’t see any of them, only heard about it after the fact. We can all pray for the families of this accident, and all of the tragedies happening around the world.

All of you that are concerned about me, I am okay. I still have some pain and complications from my medical condition and tumors. I manage pretty well most days and I am so grateful and thankful that I am able to take this trip and travel. I plan on leaving Waco on Wednesday morning and traveling north and west towards Albuquerque. I was going to be there by about August 8th, but they decided I don’t need to be there until about August 24th or so. That gives me additional time to camp along the way that I had noplanned on.

I found several camping areas along the way that I can stop in. I will take back road route from Waco to Abilene, then the Interstate for a little while to 84 north, and camp near Lubbock for a few days, then head towards I-40 west of Amarillo, and probably stay in a state park near Santa Rosa until a day or so before I need to be in Albuquerque the end of August. My plans are flexible and written in the sand, my route often changes as I drive. I look at maps and campground books the night before I leave somewhere to drive to another location, but along the way if I see something of interest, I sometimes change my route and take a different direction. The tentative route I am taking this year is about the same one I took last year when I left Waco so I know of some city owned RV parks about three miles off of highways and other types of roads that I can stay at again, or I can try different ones. It’s nice to have freedom and flexibility as I travel.

I will write again when I get wifi and have something of interest to share.