It’s been about a month since I wrote my last post. It’s mostly because I still have my right index finger in a splint and it’s not easy to type, so please excuse typos in case I don’t catch them as I type. It’s taking me about twice as long to type a post.

Since the last post was written, I have been busy. I have to go to the rehab to have my splint removed and cleaned once a week and I have been to the hand surgeon a few times. Last Tuesday morning, I went to Dr. Livingstone and she took the splint off to see if my finger is healing. My finger tip bent straight back like it did after my injury happened. That means that the tendon is not attaching to the bone and keeping my finger straight. So, the doctor says I need to wear the splint for 3 more weeks then come back for her to recheck it. I have to be honest, I was very disappointed and sad. I was hoping that in the 4 1/2 weeks that my finger has been in this splint that it would be healing. Guess not, or if it is the tendon is not strongly attached yet to keep my finger straight. She says if it doesn’t heal I will probably need a pin inserted in my finger. I’m hoping that is not what happens, I am praying that more time allows my tendon to attach to my bone. I have been wearing disposable gloves often every day so that my finger stays clean and dry. It’s not allowed to get wet or the splint gets ruined. Thankfully there is no pain, it’s just inconvenient. I usually use that finger for almost everything. Try cutting food without using that finger, holding items, etc. I am getting good at not using it, but I found that other muscles in my hand are letting me know they are being used more than normal. But now those muscles are also getting used to the increased activity. 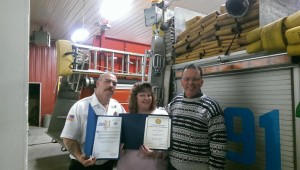 I received a surprise email last week. Bradford Volunteer Fire Department in southern New York state sent me two proclamations recognizing my donations to their volunteer fire department. I received an email a few days before the proclamations were sent letting me know that they were being mailed, the fire hose in the picture is part of what they bought with my donation. What a big surprise to receive the proclamation!!! I don’t make donations for recognition, I do it to help the various agencies. This was a pleasant surprise. The three fire departments in New York state frequently send me updates and photos of what they purchased and how it’s helping them. I love hearing from the departments and fire department members. For many years while I was a city clerk, I prepared numerous proclamations, but I don’t remember ever receiving one.  Click on the pictures to enlarge them. It really touched my heart that the fire department contacted their elected officials to request these proclamations. 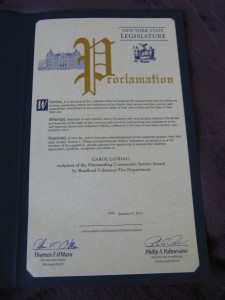 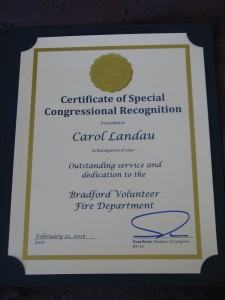 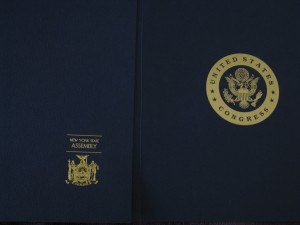 Last Saturday I got up at 3 a.m. so that I could go help my friend Nona and others work as volunteers at a 5K walk on the new runway at the Fort Lauderdale, we had to be there by 5 a.m. By volunteering at this event our Relay For Life event will receive a large donation. The proceeds from this walk goes to various Relay For Life events in our area. The t-shirt they created for this walk is really cool, and you know how much I love t-shirts. Here is Nona displaying the shirt. It was overcast, and a while before the walk was finished it started to rain really hard. A few of us that volunteered at registration were in an area where we were mostly sheltered from the rain but almost everyone else got drenched. I felt so sorry for them.

In February I attended a few local events. One was the Lighthouse Point Keeper Days which included a parade and car show at the park, I took several pictures. John Trudel the Recreation Director will be retiring soon after many years with the city, I think over 30 years. John loves fishing and frequently enters fishing tournaments. One of the inflatable slides for the children was a large mouth bass, I think that is because of John. I loved looking at old model cars. One of my favorites was Mater from the movie Cars. In the evening there was a concert and fireworks. I love watching fireworks. I also attended Pompano Beach Unity Day, and the Nautical Flea Market. 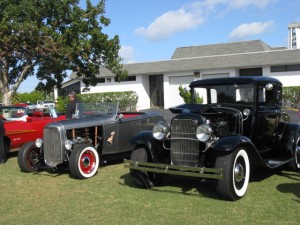 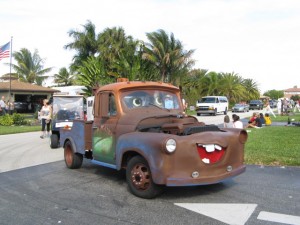 I have been baking cookies. I found a great recipe for cookies using only 5 ingredients, 6 if you make them chocolate cookies. This is such an easy recipe, and very delicious. This link will take you to the page with the recipe for these cookies which are made using almond butter, peanut butter, or any other nut butter. There are many other recipes on this website, including gluten and flour free cookies. Give these cookies a try, they are extremely easy to make. I often freeze some of the cookies I bake, this way I can have some without having to always make a batch.

I have not been reading many books or working very much on jigsaw puzzles. I have been taking more medicine in the late afternoon and into the nights and early morning hours, this is really messing up my sleeping patterns. Some days my naps are 5 until 7 p.m. Then I watch the late talk shows and fall asleep sometime during one show and wake up partway into the next one. I don’t even know I fall asleep. If I’m awake until 4 or 5 a.m. it’s difficult to get up early.

I’m still planning on taking a trip in the spring for approximately two weeks, then leave after July 4th and heading west and attending hot air balloon events, one in east Texas and of course once again the Balloon Fiesta in Albuquerque, New Mexico. I decided that I don’t want to make a 4 to 6 week trip in April and May then come home unpack my camper and then repack it a month or two later for my long trip. Taking the shorter trip will not require me to pack as much clothes, food, etc. since the temperatures will be warmer. When I leave in July I will have to pack lots more things since I’m hoping my health doesn’t get much worse so I can be gone until December. However, on that trip I need to pack for both warmer and colder weather and take more clothes and other items. It’s quite a bit of work to pack my camper van for trips. But it’s well worth it.

If you have been reading posts for a while you know that I always focus on the positive and I try to maintain an attitude of gratitude. I know that there are so many people who have much more serious health conditions and problems than I have. Just so you don’t think I am always positive and happy, this past week I had a day or two that I was out of sync, I was restless, and short on patience. It was not caused by anything big, it was because of a lot of little things, kind of like the straw that broke the camels back. It started with dropping my mother’s car at the mechanic and heading to my doctors office. We get partway there and the mechanic called, mom did not leave her key in the ignition, so I had to go back causing me to almost be late for my doctor appointment. Then finding out at the doctors that my finger was not healing. Included is my sleep pattern not being consistent and often not being able to eat much food, increased symptoms from my tumors, and a few other things going on. It was the result of lots of different things happening together. I called a couple of my close friends and shared what was happening, I prayed and took action to let these things not bother me and mess with my serenity. Quickly this funk was gone and I am so grateful. I don’t feel this way often thankfully, so it feels really strange when I do, so I get out of it as quickly as possible. Doing a gratitude list works very well.

I find that often I am able to handle problems and situations when they happen, especially serious or important things. Then sometimes afterward I feel the effect and feel out of sync for a short time. I found out on February 21st that one of my friends shot and killed himself. The funeral was on February 27th. I was so sad. I saw him the week before and we talked. It never entered my thoughts that he would commit suicide. Suicide is a permanent solution to a temporary situation. It’s selfish. Those of us left behind suffer and grieve. I will write about this in a separate story soon. I’m guessing that somehow this was a part of me feeling out of sync this week. The sadness of the loss is difficult. I feel like part of my heart is missing and shattered. It’s different than if he died from something other than suicide.

This entry was posted in 2021 Trip. Bookmark the permalink.