In April 2014, I attended the local American Cancer Society Relay for Life event, and I was honored to be the survivor speaker. I have been very involved with this Relay for about 9 years. During the survivor dinner, Lighthouse Point City Commissioner Sandy Johnson introduced me to Richard Rosser who is the Publisher of the Lighthouse Point Magazine. Richard said Sandy told him about me and he said that he would like to write a story about me sometime. I informed him that I would most probably be going on a trip a few weeks after the Relay. I also saw Richard at the Soroptimist award night.

I didn’t hear from Richard before I left on my trip, and I was hoping he forgot about writing a story about me. I’m still not comfortable having people write about me. I’m not doing what I am so that I will be written about, I’m doing it because it’s what my heart and spirit feel is right. I also understand, because numerous people have told me, that by sharing my story I am inspiring others in many ways. I’m also giving hope to people that no matter what their challenges, they can make the most out of life and live life to the fullest, however they can do it. I always try to let people know to enjoy every day, live it the best you can. Live each day as if it’s your last, one of these days you are going to be right.

I just returned from a 6 week trip to visit my firefighter friends in Georgia and South Carolina. I wrote several stories about my visits with them. You can read them in two of the posts a little below this one May 2014 and June 2014, and also in my July 2013 post when the Georgia firefighters came to visit me. While I was away, I received an email from Susan Rosser, the Lighthouse Point Magazine Creative Director, asking for permission to use some of my pictures for a story she is writing about me. I gave her permission to use any of my photographs and stories. A few weeks later, I received another email telling me that she wrote a story about me, that she thinks I will like it, and it will come out on June 25, 2014.

When I went to my mailbox on June 26th, the new issue of the Lighthouse Point Magazine was there. When I got into my apartment I opened the magazine and in Susan’s It’s the Journey story which is her editorial, she wrote that in this issue there are two stories about women on vastly different, unique journeys. The first woman is Donna Romanelli who traveled the country going to all of the GQ magazine’s 20 hamburger’s you must eat locations. The second woman was me. Susan wrote: “Carol Landau’s story seemed straightforward at first, but as we worked on the feature it became so much more to us. We didn’t know Carol’s struggle with cancer was so challenging for so long. Her zeal to live in the here and now is astounding, while her desire to help communities around the country is uplifting.” Further down she wrote: “And I hope many of you find joy and inspiration in Donna’s and Carol’s adventures.”

The way Susan wrote my story is extraordinary… and extremely creative. I love how she created the story using postcards. Very clever. In fact, during my 2011 travels, I did send postcards to several friends as I traveled.

I felt so proud of how my story was presented. By reading what Susan selected from the numerous posts on my website, I could tell she must have spent quite a bit of time reading my stories and looking at pictures in my albums. When you look at the pages in the link I am posting of the article, know that these were posted side by side in the magazine.

Here is the electronic file of the story that Susan sent me so I could post it for you to read. Postcards from Carol LHP Magazine 2014. I took the pictures below with my phone and and the text is unreadable. I posted the pictures so you can see what the magazine article looks like when you read the story using the above link. 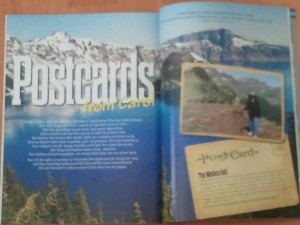 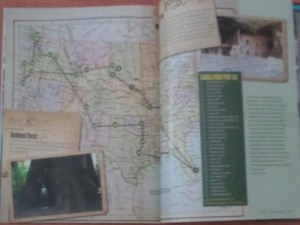 I’m glad there are not any closeup pictures of me in the article. It will still let me be pretty anonymous, other than those people around here who already know me.

One of the other stories in the magazine was written by Jack Noble, who I have personally known for many years. He has always been a source of courage and inspiration to me and many others. Instead of explaining about his article, I will let you  read the Jack Noble article for yourself.

What Jack wrote reminds me of my Lois who was a very important part of my life many years ago. Even though she died in 1989, her influence and words of wisdom still guide me daily. She used to tell me frequently that I have to take care of myself for God because if I don’t, then I can’t do what God wants me to do. I wrote a few stories about her and some of the things she told me. Here are a few of my posts about Lois which I wrote in April 2013, September 2013, and November 2013.