I left Albuquerque this morning, and headed east to Santa Rosa, then went south to Fort Sumner. Here I visited the cemetery where Billy the Kid is supposed to be buried.  I took some pictures of the cemetery and his gravesite. The sign said it was stolen many years ago and recovered in Granbury, Texas. Now it is secured with iron bars and behind a strong gated area.  There were other very old graves in the cemetery, but not that many, I’m guessing about 20. Next to the cemetery is a museum and small store. There are many antiques.  A few things I saw were old telephones, and a switchboard, all from the early 1900s. 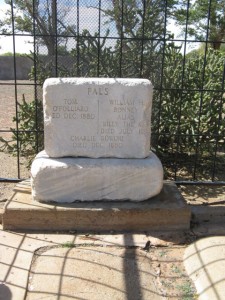 Billy the Kid and Friend

I then drove a little way down the road to the Bosque Redondo Memorial, which is operated by the State of New Mexico. It is located on the site of Fort Sumner, the remains of the fort were washed away in the floods of the 1930s. This was a very emotional place for me, I started to watch a video telling about how the soldiers killed the livestock, took the Indians land, and marched over 2,500 Native Americans to four different forts in different locations. Many were made to march about 450 miles, in very bad weather conditions from extreme heat to extreme cold. They were not given much if anything to eat or wear.  Many were killed or died on the way.  They were made to do hard labor, they tried to dig ditches to protect themselves from the weather, but it didn’t do much good. Women and children were not treated well.  I couldn’t watch the entire video, I have strong feelings on how the Native Americans were treated, I wish things were done differently. We could have learned so much from them. An extremely large blanket was woven to be auctioned in order to raise money. 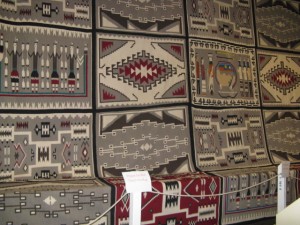 I decided not to drive back about 20 miles to Fort Sumner State Park since it was in the opposite direction I would be traveling in a few days. So, after looking at a map and my state park pamphlet for New Mexico, I drove about an hour to Clovis, NM. Oasis State Park is located near there so I thought it would be a good stopping place for a day or so. I arrived in Clovis about 4 p.m. and found an Albertson’s Grocery Store. I went to the deli to see what I could find for dinner.  They were just taking some slow cooked turkey out of their cooker and it smelled really good, so I bought a piece, and some cranberry sauce, and potato salad, and OREOS… they are a food group… chocolate!!!

I arrived at Oasis State Park and found a nice campsite that has electric and water. It turns out the couple two sites down are from Sebastian, Florida, and they were at the Balloon Fiesta too.  It was nice talking about the event, and also some campgrounds and parks to camp at in Florida. 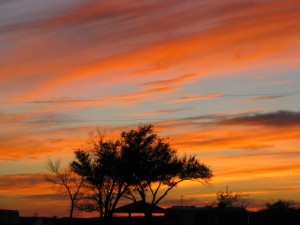 As the sun was beginning to set, the sky turned different shades of yellows, pinks, oranges, and reds. It was incredible.  New Mexico has some of the most beautiful sunsets I have ever seen. I took lots of pictures as it was changing. The sky to the west was mostly yellow and oranges, and just to the south a little it was pinks and reds.  All of the pictures in the album today of the sunset were taken on the same day.  It looks like different sunsets, but it was just this one.  I will probably stay here another day before heading into Texas.

I am pleasantly surprised tonight, that I am able to get Internet considering how far I am from town. We are in the middle of almost nowhere, there is only large prairie around us in this campground. I’m really glad I am able to use my phone as a hotspot and if I have Internet, I can update my website.  So, as of today, my travels are up-to-date.  All of today’s pictures are uploaded in a new album. 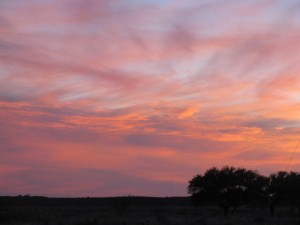 1 Response to Billy the Kid, Fort Sumner, and New Mexico Travels after Albuquerque