My activities at Homestead Heritage, Waco, Texas, includes working at the Cheese Shop and making soap and lotion… Also change in Photo Albums from Picasa to Google Photos

I am still in Waco, Texas, at Homestead Heritage, where I have been coming for many, many years. I love seeing my friends here and also I stay busy. I have worked several days at the Cheese Shop packaging cheese, and making marinated Feta cheese which is really delicious especially when it’s put on pasta or crackers. I have also been peeling and slicing pears from the pear trees and putting them in a dehydrator to preserve them.

Yesterday I was unpleasantly surprised when I went to my Photo Gallery Tab to show someone an album of pictures I took a few months ago of spectacular sunsets. When I clicked on the link that I have been using since 2011 for my pictures, I got an error code. Upon further research, it seems Google retired Picasa which is what I was using to upload my photos and to create albums. It was easy to use. It seems that Google transferred all my photos to their Google Photos, however, it seems that the links in my stories takes my readers to the Google Photos page where all of the albums are now stored. It doesn’t go directly to the album that relates to a particular story like it did when Picasa was still an option, which it no longer is.

I tried to upload a small album of pictures I took while making soap and lotion last night using Google Photos, it’s not as user friendly for me, but I guess I will get used to it. So, bear with me and PLEASE let me know if you are not able to see albums or have trouble getting to them so I can work on resolving any issues. Please also be patient with me as I navigate this new procedure for photo albums. I wish they waited until the end of the year. I think it’s going to be more of a challenge when I get to Albuquerque and want to upload hundreds of balloon pictures. I doubt I can create an album as easily as I did in Picasa. I’m hoping I will be pleasantly surprised and it will work just fine. Like many others, I don’t always like change!!!

I have been in Waco at Homestead Heritage almost 2 weeks and I will be here until about August 16th, then I will head towards Abilene, Lubbock, Texas, then Santa Rosa and Albuquerque, New Mexico. Once I leave Waco, I will have limited Internet service.

It’s been lots of fun helping at the various places here and going out to eat and visiting with my friends here. Rachel, one of my friends makes fantastic soaps and lotions using various scents and materials such as oatmeal, essential oils, etc. The soaps all smell so good. the purple and pink one on the top is black cherry, the green on the next shelf is spearmint. 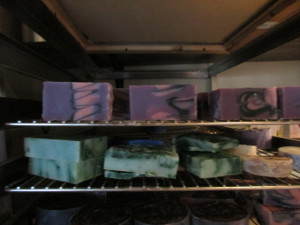 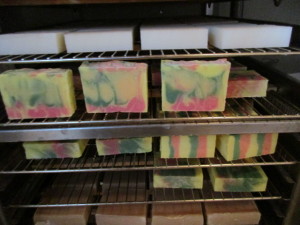 I told Rachel that if she makes any while I am here I would love to help her. She said she is making some Saturday and Monday nights, I offered to help. Saturday evening she picked me up and took me to her shop. Rachel was great at explaining the chemistry of the ingredients and the process for making both soaps and lotions. I found it really interesting to listen to how the ingredients react to each other, and also to watch the consistency change as the ingredients are heated and mixed. Watching water, lye, oils, and other ingredients go from a boiling mix and using a mixer to see it become more congealed and beginning to look like liquid soap. Then we poured the scented oils into the mix and poured it into molds. It was fascinating.  The batch we made Saturday night was a mixture of Eucalyptus oil, Spearmint oil, and Peppermint oil. We kept adding the oils until we liked the scent and that it was balanced and one scent did not over power another one. 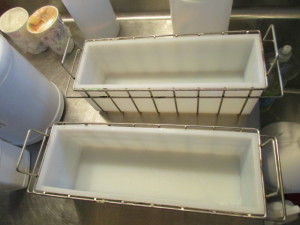 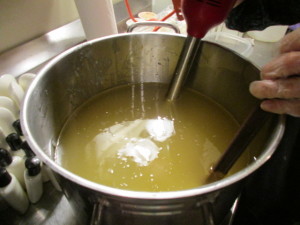 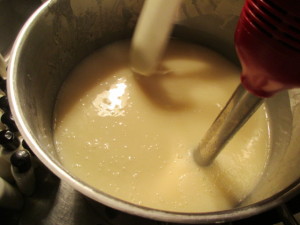 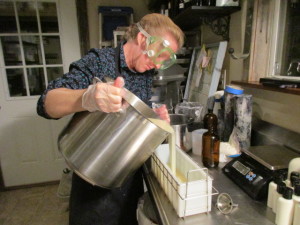 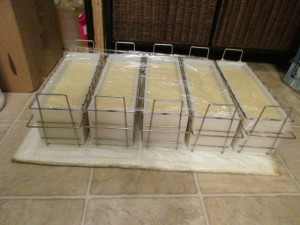 The same goes for making the lotions. Ingredients were measured and poured into a mixing bowl and a stand mixer mixed the ingredients for about 20 minutes or so. As the mixture cooled it began to thicken and change color and consistency. While it was still warm, we poured it into the lotion bottles. After it cools, we top off the bottles and cap them. 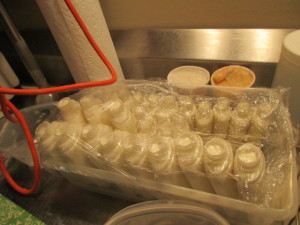 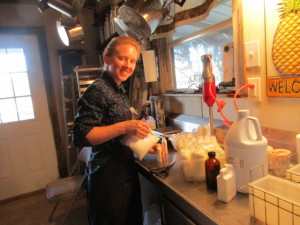 One of the ingredients we needed was castor oil. Rachel put her bottle under the nozzle of the large caster oil box so that only the amount we needed would be used. We got busy filling and capping lotion bottles and forgot to keep an eye on the caster oil container that was being filled. It was coming out slowly so we thought it would take a while. When we remembered to look at the bottle, we saw that it not only overflowed, but there was a very large puddle on the floor where the castor oil overflowed. We turned of the valve and got to scraping up the oil and cleaning the floor. Castor oil is a thick and sticky oil and it wasn’t very much fun to clean off of the floor and our shoes, but we managed and then went back to making the soap and a new batch of lotion. Rachel uses Shea Butter in her lotion and I put some on my really dry skin and it worked great. She has several different scents.

I had only planned on staying here for a week and then traveling north and staying at a Corps of Engineer Park at Lake Whitney which is about half of an hour north of where I am. The owner of this local RV park said that he preferred that I stay here when I have friends rather than spend two weeks camping alone. Since I love being here and there is always lots to do, I decided to stay here where I keep busy and get to see my friends, that is the ones that are here and not traveling like some of them currently are doing. I miss them but I’m so happy that they are able to take a great vacation. While I was here I had the transmission fluid changed in my camper and they put a conditioner in it too. It’s been 27,000 miles since it was last done. I have had my camper van for 10 years and I have driven 70,000 miles, most of them since 2011 when I retired.

One night this past week one of my friends and I went out to dinner in downtown Waco, after dinner we went by the Waco river where one day the city hopes to build stores and restaurants sort of like the San Antonio Riverwalk. Many years ago the Chisolm Trail came through Waco, and in tribute to it bronze statues were placed along the road where the trail came through and crossed the river. It was really interesting to see these amazing real looking bronze cattle and cowboys on horses. It stretched out about half a block in downtown Waco along one of the main streets. There was so much detail sculpted into the statues, especially on the cowboys and their saddles, I’m not sure it shows up very much in the pictures. I took a lot of pictures, but it was using my phone since I didn’t have my camera with me. 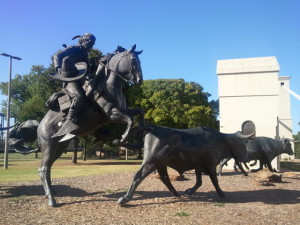 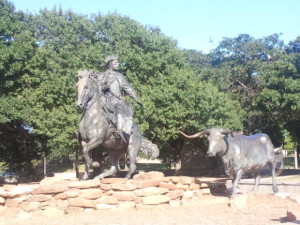 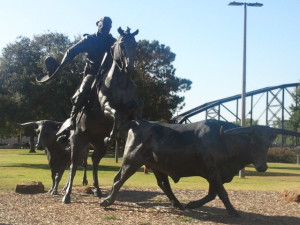 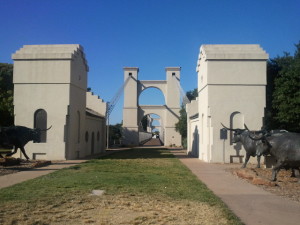 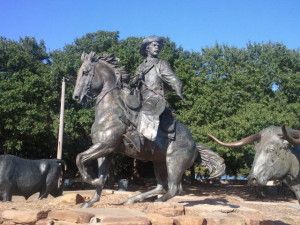 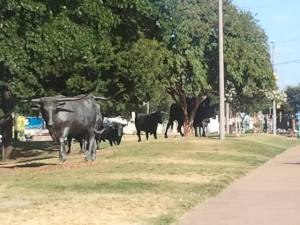 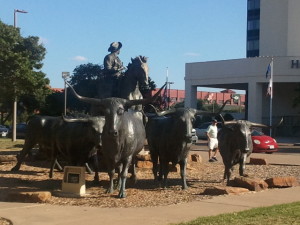 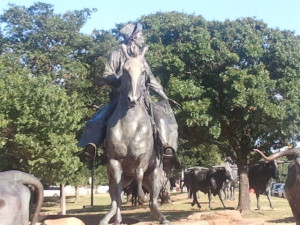 At the campground, I hung my hammock in the shade between two trees and have been relaxing in it when I can and when it’s not too hot to be outdoors. 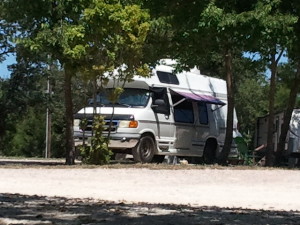 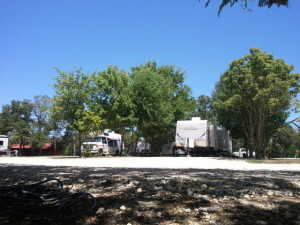