I woke up this morning and thought it would be a nice day to visit Mt. Rushmore. It was only about 30 miles away so I thought I would go there and explore and come back to my campsite, which I had paid for and reserved for one more night. I wanted to take the scenic route through the 4 tunnels and I checked the map to be sure that I had the height and with clearance I needed. It checked out okay. So I set off on my expedition at about 6:15 a.m. Remember, this was about a 30 mile trip. I arrived at Mt. Rushmore about 8:30 a.m. I knew the road was going to be a winding and steep road, but it was more than I anticipated. It worked out okay, but the speed limit was mostly 20 mph, some places were 35 mph. The hairpin turns and sharp curves were really challenging. The road was so narrow and the curves so sharp that I and other drivers had to really keep in our lanes so as to not have any mishaps.

As I climbed higher up the mountain, I was able to see Mt. Rushmore off in the distance and after I drove though one of the tunnels, there was Mt. Rushmore framed by the rock tunnel. Since there was no one behind me I was able to stop and take a picture. A little higher up there was an overlook. I stopped there to also take a picture. Seeing where I was, the huge valley between me and Mt. Rushmore, I couldn’t imagine that the road I was on was going to get me there, but it did.

Mt. Rushmore looking through a tunnel

When I arrived at Mt. Rushmore, I was in awe of the size of the mountain and the carvings. One of the first things that greeted everyone was the avenue of the flags that we had to walk through to get to the mountain. I took the path that lead to the base of the mountain where the figures could be seen at a closer distance and along the path there were places to stop that featured one or more of the presidents that were not seen from the angle of another part of the path. I used the zoom feature on my camera to take some close up photos. I also went into the studio where they had an exhibit of how the presidents were carved. There was a large plaster mold of President Lincoln on display. During the carving stage of the mountain, the plaster molds were hung down so that the sculptors could visualize what they were carving. I can’t even imagine dangling from the top of the mountain and doing the carving, using explosives, etc. I also did not know that in the mountain behind the presidents there is a vault with historical information. It cannot not be seen by the general public, but in the studio they had a photo board showing it. I took a picture, not sure if you can see the detail in the photo. 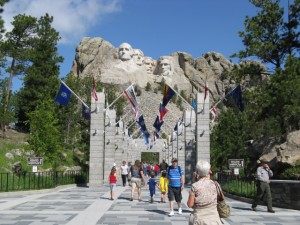 Avenue of the Flags 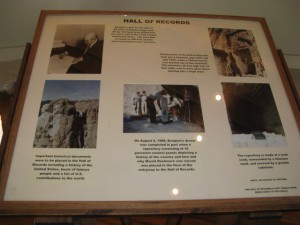 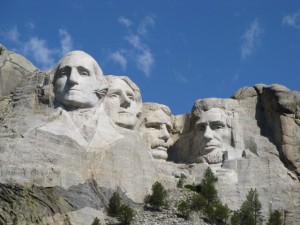 After the drive to Mt. Rushmore, I decided that I did not want to drive all the way back to the campsite for 2 hours on steep winding roads, only to have to do it again tomorrow when I left the park and headed north again. So, I continued on my journey northeast and went to Bear Butte State Park near Sturgis. One of my Native American friends told me I need to stop by this sacred site. I found it and also the state park campground which had a few vacant spots. It’s also rough camping with no water or electricity and it’s on the lake, not the sites, but the road in a spot borders the lake. I reserved my place, then went up the mountain to the visitor center. I saw a herd of bison grazing which is really great to see them becoming more popular again. At the visitor center I found the trail up the mountain. It was a 2 mile hike and I thought I would give it a try and see how far I was able to climb since it was pretty steep. I filled my water bottle and started up the mountain. I also had to watch for the poison ivy that was all along the trail. I made a few stops and about half mile up found a great place to just sit and enjoy the view and listen to the wind and the birds. I decided that was far enough, the climb from there looked much steeper. I was watching people coming down and climbing up and decided I didn’t want to stress myself any more, especially since I walked and climbed steep stairs at Mt. Rushmore earlier in the day. The walk back down was pretty easy compared to the hike up. Since this is a sacred site, all along the trail were prayer flags, pieces of cloth in various colors, sizes, etc. representing the prayers of many nations of people, and many tribes. 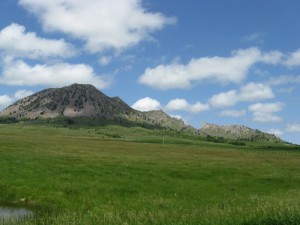 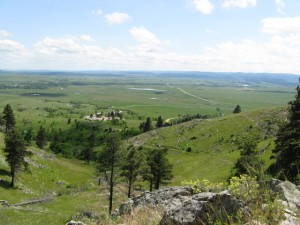 Looking down from partway up Bear Butte

I went back to my campsite and relaxed for a while. In the early evening I drove through Sturgis and explored a little in the area. Then back to my campsite. It is now starting to thunder and I saw flashes of lightening. It was sunny with blue sky and white clouds all day. I bet the rain starts soon. Looking at my camper, no one would ever know that I washed it yesterday. The dirt and gravel roads, and the rain has not helped it stay clean. Since I don’t have Internet access, nor a TV, I am typing my daily notes at night when I am camped. I am writing this at 9:15 p.m. Just like my post from the caves, I will post this when I have Internet access.

Talking with people today, I found out some side trips and different routes to get me where I want to go next which is Devil’s Tower in WY. The destination will be the same, but now I have some great places to stop and see on a different route. One of the changes will take me on a scenic road south and west of the original highway route, but there are supposed to be some amazing waterfalls. I will take some pictures and post them one day soon. I love ability to be flexible and see how this trip evolves. Tonight I met someone else that gave me another alternate route to where I am going to see the waterfalls, and it will keep me off the highway for a longer distance. This does have advantages and disadvantages, such as the time factor, but I don’t have to be anywhere at a set time, so I can adjust routes as needed. I always try to make sure I have almost a full tank, and definitely not less than half when I can help it.

I was talking with the couple across the campsite from me today. I was telling them about where I am going on this journey and they gave me some other towns and sites to see in WY since I will be there anyway on my way to Yellowstone National Park. They also told me that a few years ago they went to a hot air balloon festival, not in NM and that they volunteered when they got there and became ground crews for some of the teams. Because she was a volunteer, the wife was asked if she would like a free balloon ride when the team went up on one of their rises. And she said it was great. The husband was part of the chase crew.

This evening while I was out in town, I talked with someone and he told me that he used to work as a crew for a balloon team and they are almost always looking for volunteers and often give the volunteers free rides. One of my bucket list things is to go up in a hot air balloon. He suggested that I get to Albquerque several days before the event and see if any teams need volunteers. What a great idea! I would not have thought of that. I was thinking that with the estimated 100,000 people that attend the event, that I might just view it from a distance. Now, I can try to arrange my schedule to get there about a week early, if possible and see how it goes.

I am learning so much on this trip. The couple in the campsite across from said that when they are camping somewhere for a while, they ask for the monthly rate and pay that amount. They said it comes out less than paying a daily rate, even if they leave before the month is out. Great idea for me to check out when I will be somewhere for a while.

That’s about it for now, more next time.