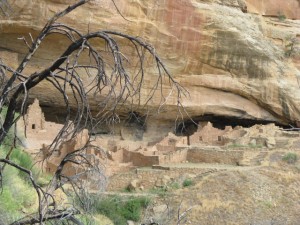 I left Moab, Utah about 2 p.m. On Tuesday, August 30th after my package arrived. I then drove to Cortez, Colorado which is about 2 hours southeast to have my transmission checked. I arrived at Jimmy’s Transmission and Jim hooked up his electronic monitor to my van and then took it for a fairly long test drive and told me that he couldn’t find anything wrong. The machine did not show any errors and he said if there were any problems it would show. He said that it’s a combination of the high altitude, the heat, and also the size of my engine. He gave me some tips for driving in this altitude and in the steep mountains and wished me well on my journey. I offered to pay for his time and he wouldn’t accept any payment. I am so grateful there wasn’t anything wrong. Thank you God! I thanked Jim again and headed for Mesa Verde National Park which was about 10 miles down the road. 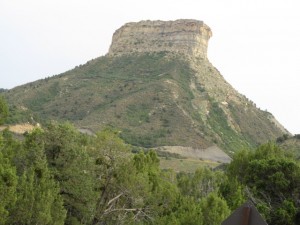 I arrived at Mesa Verde National Park about 4 p.m. The entrance gate is a few miles off the main road, then the campground is 4 miles past that. Of course the road is steep and winding as it goes up the mesa into the park. It’s pretty steep so 2nd drive is a necessity. I arrived at the campground and got a spot for 3 nights. I didn’t get a site with electric and water since it was $34 per night. The spots with only parking and picnic tables are $12 per night with my access pass so that works well for me. I have plenty of water and propane so I’m set for several days.

The wi fi connection at this visitor center is so slow, I am trying to upload photos to insert in this blog, but it might not happen. I created a photo album with the pictures of Mesa Verde.  Note: 2012 and after, Over the years people have asked what is my favorite place of all the places I have visited. I have to say that Mesa Verde is at the top of the list. I think about the people living here and what they faced on a day to day basis, and how they built the community they built, and the way they lived. This is an amazing and unique place.

After I parked, I walked around the campground for a while. It’s pretty nice and they have several areas for camping. I saw several deer and fawns grazing and they didn’t seem to care that I was walking by. 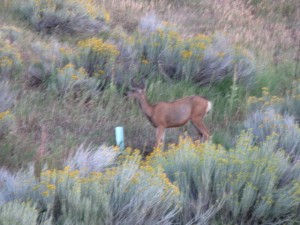 A few sites down from me was a couple in a camper van and I stopped to say hello. Their names are Bob and Sandy. We talked about exploring the park and I told them I wanted to do the Wetherill Mesa Road and Long House but my van is too heavy and not permitted on the road to that area of the park since the roads are steep and winding. They told me they are going to do that tomorrow (Wednesday) and I asked if I could go with them, they said I could and we made a time and place to meet.

I met up with Bob and Sandy. As we were driving to Wetherill Mesa it began to rain but it was okay, it seemed to cool things off a bit. We had tickets for the 10 a.m. Tour and we got there in plenty of time.

We walked down a trail and some steep steps and kept walking and then as we walked around a curve in the path, we saw Long House which is a cliff dwelling, the 2nd largest one. Cliff Palace is the largest one. Anyway, we walked further down the path and walked into Long House. The ranger was really interesting to listen to. She explained the history of the cliff dwelling which was used by the ancestral puebloans until about 1300. I don’t have all the statistics with me, but about 150 people lived there and and there were over 100 rooms. I’m sure you can find more info on the National Park Service website for Mesa Verde National Park, in Colorado. 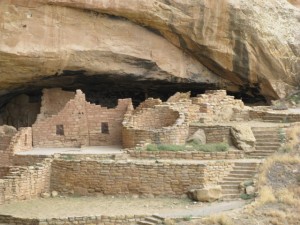 We climbed two 15′ ladders to the upper levels and were able to walk through the entire cliff dwelling and we were able to look into the different rooms. It turns out what we thought were windows in the walls are actually doors. They are pretty small, but evidently the cliff dwellers were fairly small and their life span was 30-40 years old. There are some t-shirt shaped doorways too, that is so they can put a piece of sandstone in the opening to block light, weather, etc. and still have a little opening. I learned about pit houses, kivas, and how food was stored in upper levels where it was cooler. The black along the walls and upper portions of the cliffs is from the fires that they used to cook, heat the cliff houses, and also used for ceremonial purposes. 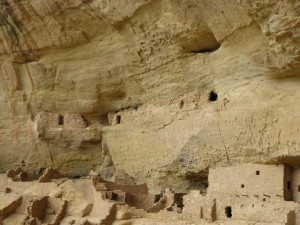 It was so interesting, and to look at the structures and how they were built with sandstone blocks, mortar, and the shapes both square and round that were build with only primitive tools really shows how much they knew and how creative they were to construct this type of dwelling. We learned that the crops were grown on the top of the mesa and the cliff dwellers used rope and hand and foot holds they chiseled into the stone to climb to tend their crops. The only animals they had were dogs and turkeys. There are signs that they traded items with other tribes and cultures.