We had an unexpected surprise this morning, the wind was not too bad early in the morning and the balloons were allowed to fly. Photo Album

Yesterday morning, the winds were really strong and no one was allowed to fly or inflate. It was special shapes day so I know everyone was really disappointed. Shortly after the officials made the call to cancel the flights, it started to rain, and really rain hard. Since we were not flying, I went to my volunteer station in the Balloon Discovery Center, so I got there just as the sky opened up. So many people crowded into our large tent to escape the rain which lasted about an hour.

It was really windy all day, and the evening glow was cancelled. Those of us who were volunteering showed up for our afternoon shift, but after a while it started to rain, and then there was gravel size hail. So after an hour we all left, it was about 4 p.m.  I went back to my camper and relaxed and read a book. About 7:30 p.m. I hear some fireworks, and I looked out my door, and even though the winds were really strong, they had an incredible fireworks show. I am parked between two large motor homes, and my camper was still rocking in the wind. 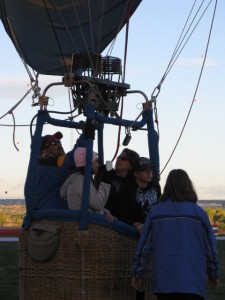 Anyway, this morning we were allowed to fly and we were one of the first balloons in the air.  Scott took his fiance Keralyn, her friend Jennifer, and his son Jack up with him. It was Jennifers first ride.  While we were inflating the balloon, I asked Jennifer to take a few pictures, and she got some with me holding the balloon envelope and helping to upright the basket. These are my usual inflation duties. 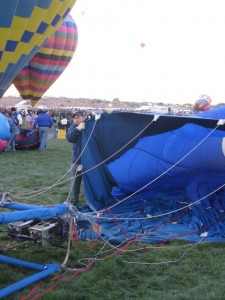 While we were all standing in the really wet field preparing the balloon for launch, we realized our feet were really cold, it’s about 46 to 50 degrees and the grass is really wet from the rain yesterday. I reached down to see what the white was on my black sneakers and found out it was ice or frost. Almost all of us had that on our shoes. You can see that we are all dressed in sweatshirts, jackets, etc. It’s been cold in the mornings, but it warms up into the 70s during the daytime.

After the balloon launched, I got in the chase vehicle and we arrived at the park where Scott was landing a few minutes before he got there so we were able to catch the basket as he gently landed it on the grass.  We got our balloon packed, and helped other balloons land. 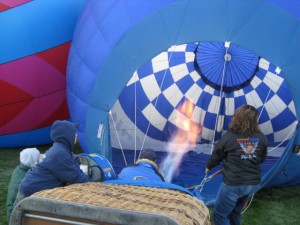 I also got to see the wheelchair balloon flying, it’s called Reach For The Stars. I took lots of pictures of it in the sky. This balloon was made in Spain, I got to talk to the pilot and meet the man who made it.  This is a wheelchair accessible balloon and the pilot goes to schools, and camps and gives children free rides.   Just before we left the park, we saw this balloon getting ready to land and we waited and helped it land. It’s really a very large balloon and it took lots of people to catch and hold down the basket until the balloon envelope was able to lay down.  I also took some pictures of special shapes balloons that I was able to see while we were in the park after packing Scott’s balloon. I posted them in my photo album. 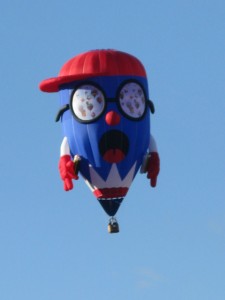 After arriving back at the field, I saw the POW/MIA balloon still inflated. I got some pictures of it. There is a tear coming out of one eye of the eagle. I took a closeup of the face. 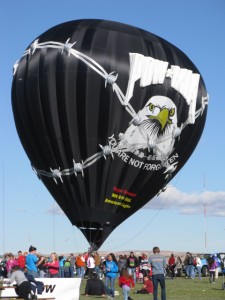 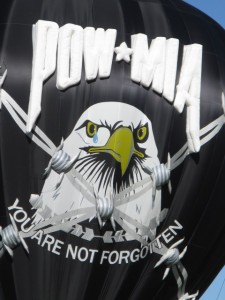 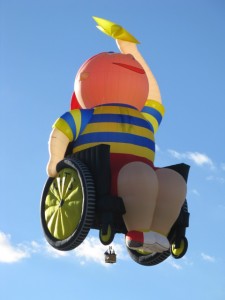 Reach For The Stars