If you have been reading my posts since last summer, you may have read in July 2013 about the Madray Springs Volunteer Fire Department in Georgia submitting a video in hopes of winning 10 pair of boots for their department. They got the most votes and won the boots. Check out their We Need Boots video on Utube… it will make you laugh. I watch it every now and then and it’s still funny. Patty, one of their firefighters is the lady making believe that her cat is in the tree. Chief Ashley Dent is the driver of the fire truck and is wearing a blue baseball cap. Chief Dent and a few of his firefighters still keep in touch with me. Patty and I have spoken on the phone, she has a great laugh and sense of humor. She’s sort of the mother of the group of firefighters and she takes pride in her “guys.” 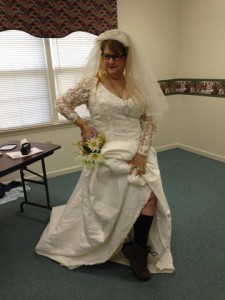 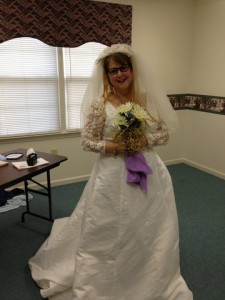 I was really surprised yesterday when I received a package from Patty. It contained a crystal angel for me, a thank you card with words that I know were written from her heart, a jump drive with the pictures of their recent fire department training, and also as she called it silly video of the wedding rehearsal she recently participated in when asked to stand in for her niece at the dress rehearsal. Patty gave me permission to post them in a story. I thought you might like to see them too. Patty was hesitant to stand in for the bride at the rehearsal, but she decided to do it anyway. However, she did it with her own special flair. Several weeks ago we talked and she told me how she went and bought a wedding dress at a thrift store, along with some plastic flowers. She wore thick black glasses, too much makeup, and also black socks and boots. We had lots of laughs thinking of what else she could do to make this rehearsal funny and memorable. Please watch the three videos at the end of the photo album, they will make you smile, perhaps even laugh. It doesn’t show in the video that she is wearing the socks and boots, I’m guessing that’s why everyone is laughing.

You would not know it by looking at Patty, but her and her husband trap and catch alligators. Especially, if they are in an area they are not supposed to be or in a place that can cause harm to people. I can’t imagine me even attempting to do something like that.

I posted an album with the videos and all of the photos Patty sent.

In addition to pictures she took during the department’s training exercise of the firefighters cutting a car apart, she also included a picture of the six sets of bunker gear which are some of the items I purchased for their department. It means a lot to them, not only can they respond to calls more equipped now, but it also allows them to have their department names on their bunker gear. Previously, all of their gear was handed down from the county or other departments, so instead of MSVFD, it would have the other agencies initials. They like the fact that when they are on calls now, people can see that they have the MSVFD department on the scene. It looks like perhaps the Odum and Wayne County fire departments participated in this training. If you enlarge the photo on the top right below, you will see my name on the back of Chief Dent’s helmet. He and the other two chiefs, Chief Altman and Chief Truman, and the firefighters that came to meet me asked me to sign their helmets, which was an unexpected honor for me. 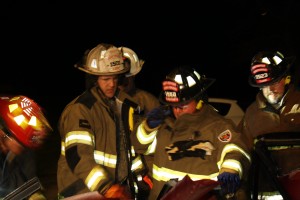 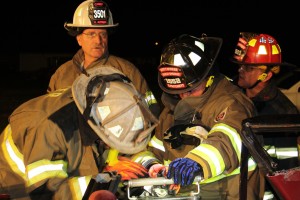 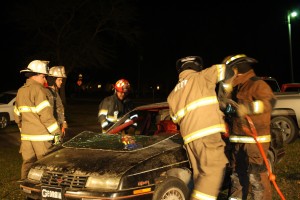 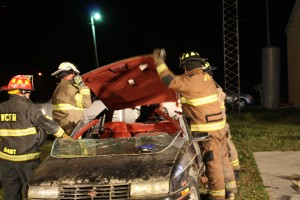 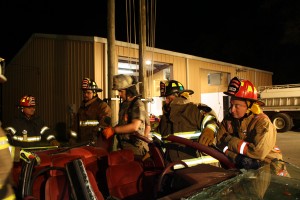 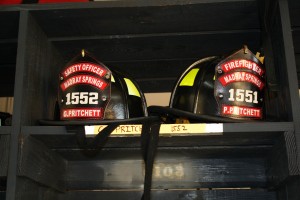 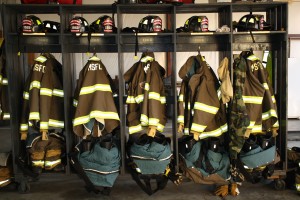 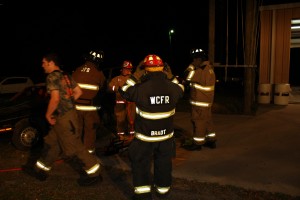 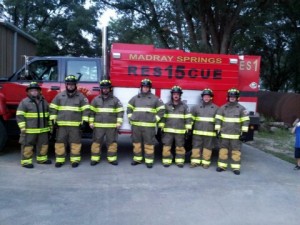 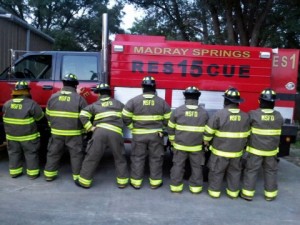 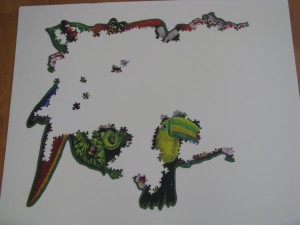 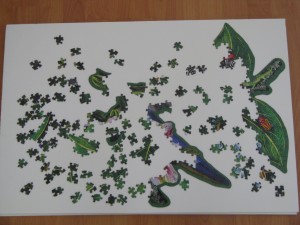 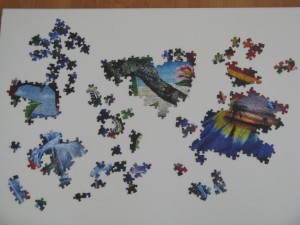 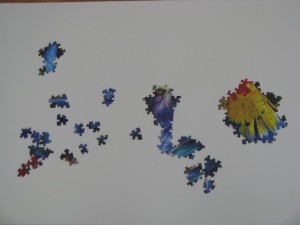 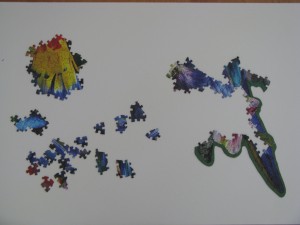 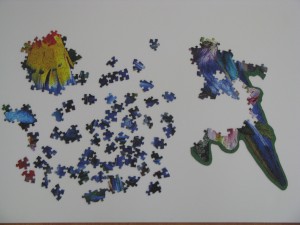 Because I have not been working on a puzzle very often, I haven’t included any stories about jigsaw puzzles recently.  Mostly, I’ve been reading books, taking naps, and relaxing. The last puzzle that was started was in February when we began Parrots in Paradise. I showed the beginning of it towards the end of February when Pam, Mary Lou, and I got part of the outline completed. It would be worked on every now and then, but not lots of progress the past few weeks. This has not been an easy puzzle to work on, besides the odd shaped pieces, there are only a few main colors to the pieces, and you might not be able to see it unless you enlarge the pictures, but there are hidden objects and small bugs, butterflies, etc. in the puzzle which makes it more interesting, but also more challenging. Now, since there has been some progress this week I thought I would provide an update and some pictures of the progress of the puzzle. As in other puzzles, we complete sections on foam board then move them into the outline of the puzzle. It makes it easier to work on large puzzles this way. My friend Sandy came over and helped, then yesterday Pam came for a visit. Between the three of us working on it this week we made some progress. 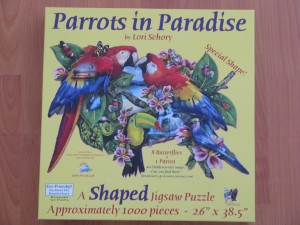 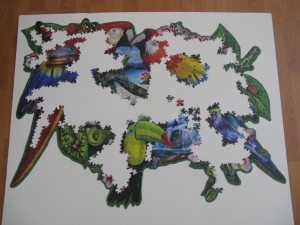 Last fall a bird built a nest under the ledge of the roof outside my front door and two baby birds hatched and then flew away. The nest remained and I haven’t seen any birds there until today. I saw a mother and two babies, the mom was really wet she must have been out in the heavy rain we had today. Strange that I didn’t see her sitting on the nest like last time. I saw her feeding the young birds today, then a few hours later all I saw was one of the babies sitting on the edge above my living room window. The baby bird is about 3 or 4 inches long and about 2 or 3 inches high. 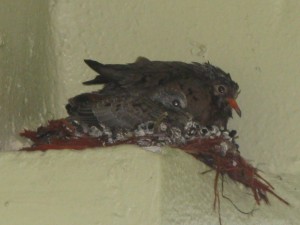 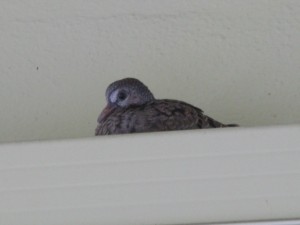 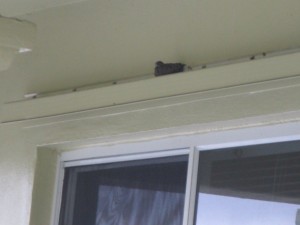 Update: Monday morning. When I woke up today the baby bird was back in the nest. A few hours later I heard a noise on the ledge outside my side living room window. I looked out and saw the baby bird on the narrow brick ledge, then the mama bird joined it and was feeding the baby. Now they are just sitting side by side enjoying the shade and light breeze. 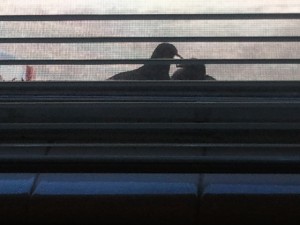 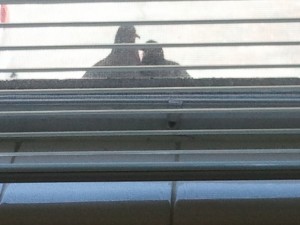 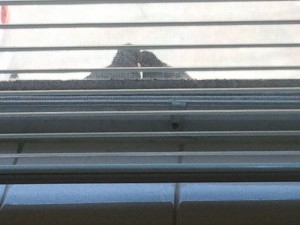 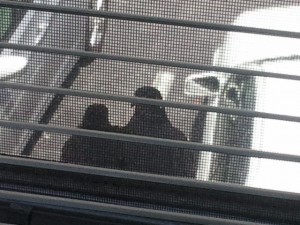 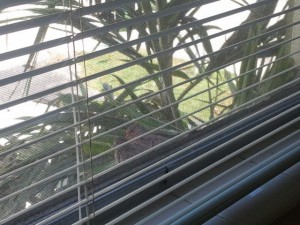 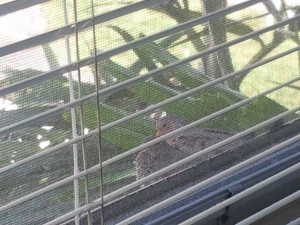 I can hear them making cooing sounds. It looks like it’s some type of small dove.

This is the closest I have been able to watch a bird interact with it’s baby. I am able to get about a foot or so from the window. I don’t want to lift the mini blinds because I don’t want to scare the birds. Every now and then the mama bird turns around and looks in my window.