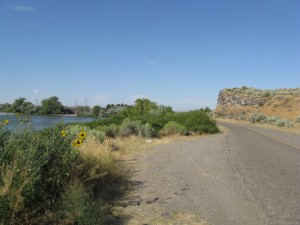 I drove to Lake Walcott to meet Pat Bean and her black cocker spaniel named Maggie. It was a 20 minute drive from the campground I was at to this state park which is really beautiful and is bordered by Lake Walcott which is fed by the Snake River. It’s also a National Wildlife Refuge so there are many birds and habitat and marshes. I was told the land around the park is called high desert. There is lots of sagebrush, sunflowers, and other plants that thrive in this dry climate. 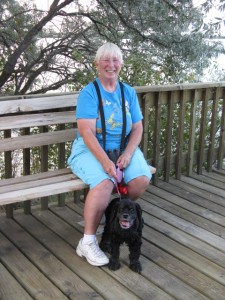 Anyway, upon arriving at the park, I found Pat’s campsite and said hello. We greeted each other with hugs and were really glad we got to meet. Pat has a great smile and laugh. She’s a really nice lady and I’m glad we are able to connect since we only corresponded by email. I also thanked her for the camp site and thanked the ranger that let me have it for free, it saved me $70 which I will use for gas going into Utah.

Pat, Maggie, and I walked along the lake Friday night and she told me about the paths to the dam, and other areas of the park. Pat worked at the camp gate on Saturday for 4 hours, so when I got up in the morning, I walked all the trails around the park. I went to the dam, walked through the tent camps area, the wildflife refuge, then walked out of the park down the road to the river where there were white pelicans floating in the water. I stopped on my way back and sat and visited with her while she waited for people to come into the park either to camp or for the day. 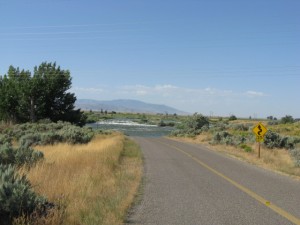 Walking down the road there was an optical illusion, it looked like the road went right into the water. It looked really cool, however, as we know, the road curved and didn’t go directly to the river, unless I walked or drove down the gravel road. I just stood on the roadway and took photos of the river and along the road. One side of the road was the river, the other was a hill and the desert. 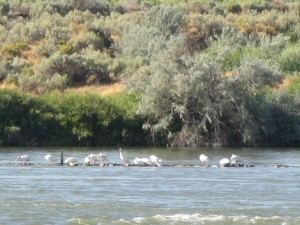 Coming back to my campsite, I put a blanket under a tree in the shade and read a book. It’s really pretty quiet here this weekend. I understand next weekend the campground will be overfilled, there is a disc golf tournament and there are going to be a lot of people. Disc golf is sort of like Frisbee from what I understand, discs are thrown into metal baskets that are raised from the ground on posts. I am glad I was here this weekend.

Saturday Pat cooked stew for dinner and it was really good, tonight, Sunday, I am making hotdogs in a blanket, baked beans, and homemade potato salad for dinner. Tomorrow morning, Monday, I head into Utah and then to Colorado and New Mexico. I plan on being in Albuquerque about September 22nd give or take a few days.

Since Pat is familiar with this Utah, Colorado, and New Mexico. I got out my maps for these states and we mapped out a scenic and interesting route for me to drive to New Mexico, it’s going through Colorado to see Mesa Verde National Park which I had not planned on seeing but it looks very interesting and I am excited to visit there. I had planned on going to Canyon de Chellys, but from looking at my map and online, it is really remote, I would need a guide to take me into the land, and I didn’t see anything online that I felt was good for me to connect with. It turns out Mesa Verde is a similar if not better option, and it also has the old sites in the canyon like Canyon de Chellys, and there is a campground and it’s more scenic and not so remote. We also talked about Texas and the places we have been there. Several of her children live in various parts of Texas and she will be there in November. When I am in Fort Worth, she will be in Dallas and we are going to try and get together again then.

I am going to be driving from Idaho to Utah, and I wasn’t really sure I wanted to drive the interstate through Salt Lake City. I had heard from several people during my travels that the traffic is really bad all the time, and there wasn’t really anything I wanted to stop to see there. I had seen a route to the east that was a little more distance to drive, but it would avoid the traffic and take me down towards Provo and on to Moab. I asked Pat about the alternate route and she said it’s a really nice drive and she has taken it often. So I highlighted that route and will take it east and south when I get near I think it’s Ogden, I don’t have the map in front of me at the moment. 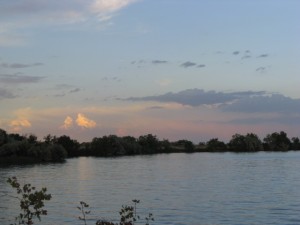 About sunset, Pat and I took a walk to the lake and stood at the point hoping to get pictures of a great sunset, however, due to some storm clouds in which we saw lightening and heard thunder, the sky was not full of the beautiful sunset colors. However, I was able to get some interesting pictures of the sunset, water with the reflections, and also some of the stormy sky. As I was taking pictures, just about as the sun got to the horizon through the trees, I saw the sky turn this really pretty orange/yellow and I got a picture of it. 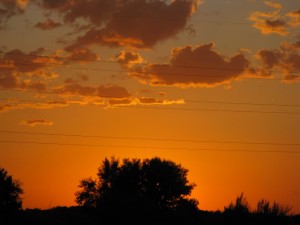 After dark, I went in and read a while as I listened to the rain and storm and finally fell asleep. I got up in the morning, made the potato salad and decided to write my story to post when I got internet. I don’t have phone reception, but when I connected my computer, I found out that the campground has wi fi and they provide 20 minutes free, then they charge $3.00 per day. So, I’m writing this off line and then will upload and if I have time I will do the pictures, if not, I will upload the pictures when I can.