I arrived in Lake Okatibbee which is a Corps of Engineer Park near Meridian, MS. It’s really beautiful here, and since school started this week, it was almost empty. There were only three of us campers in the park section I was in.  I had a camp site almost on the water. All the trees were over 100 feet tall and the sites were really shaded which was great since it was really hot.  I stayed here for two nights. Photo Album 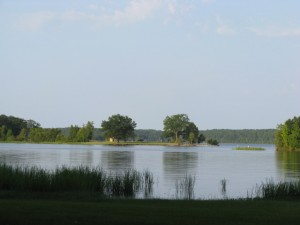 The first day I decided to go sightseeing, I found an old general store that was supposed to have a working gristmill from the early 1900s,  I drove 45 minutes and found the location. It was not a working gristmill, it was a small grinding machine that sometimes the lady that ran the store ground corn on. 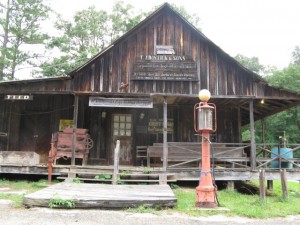 Two other small groups of people came while I was there, I guess they read the same article in the local book that I did.  The general store is from 1895 and is a historical building. There is a older woman that runs it. She and her recently deceased husband ran the store for many years. She said he was a camera man in Hollywood and one of the films he worked on was Blue Hawaii with Elvis.  There were lots of old movie posters on the walls which she says are collector items.  She was kind and let me take pictures of various items, and she even opened the old building where the mill was stored.  Photo Album.

After I left there I stopped for lunch and then went back to the campground. I hung my hammock between two trees and I got comfortable and read a book. It was so peaceful and quiet, I wanted to stay there for days. But I also wanted to go on further east towards Texas.