It seems every afternoon that I have been here at Lake Cochiti that there has been a rainstorm with thunder and lighting in the late afternoon and into the evening. I’m guessing the rain is much needed here since recently there were severe forest fires and I saw today that there are still some burning.

Here is a link to the photos I took at Tent Rocks. 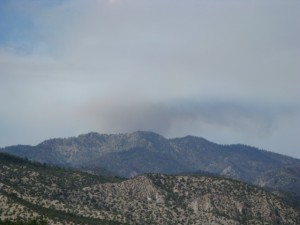 Yesterday afternoon I went to the library and checked my email. When I got back to the campground a few miles away it was just starting to rain again.  Here you can see the sky get dark, the rain falling from the clouds, and the darkness setting in.  It really stormed severely and the wind really blew. The rain was coming down sideways and I could feel my camper blowing a bit.  A while later the sun started to show through some of the clouds and I wondered if there was a rainbow. 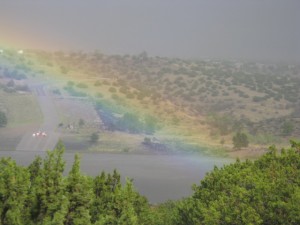 I looked out the window and saw a full arc rainbow just above the lake and pretty close to where I was in the campground. I took a few photos through the window and the rainbow didn’t show as bright as it was. So I went outside in the rain and tried to get a few photos. 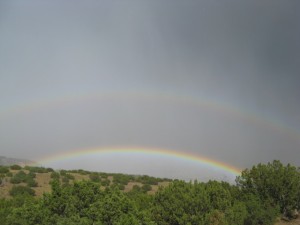 Then a few minutes later, I noticed that there was a double full arc rainbow. I could see where it started and ended this side of the mountain. It was not a tall, high rainbow, it was pretty close to the horizon, or at least it seemed that way. In case you don’t know it, double rainbows are mirror images and the colors are reversed.  It was a spectacular site to see and watch until it disappeared. 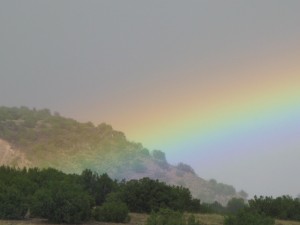 I got up and finished reading a book I started yesterday. The library opened at 2 p.m. today so I had breakfast, read some more and then decided to drive 10 miles to Kasha-Katuwe Tent Rocks National Monument, which is near the Pueblo  de Cochiti.  It was worth the drive. I drove the 4 miles from the entrance to the parking lot and as I drove I saw the smoke from a fire still burning on the backside of the mountain.  I parked in the parking lot and walked a ways up the trail on the mesa to look at the rock formations. They are very interesting. I took lots of photos which are in a new album with the rainbow photos. 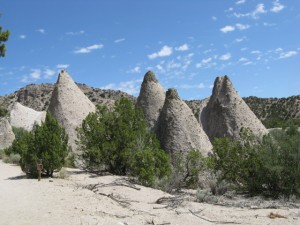 These rock formations are the products of volcanic eruptions that occured 6 to 7 million years ago and left pumice, ash, and tuff deposits over 1,000 feet thick. 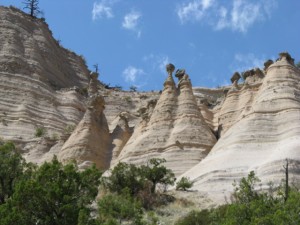 The Jemez volcanic explosion had hot gases which blasted down the slopes causing these formatins. Along with the wind, rain, and other elements that created these interesting formations. The only thing on the mountain was some cactus, lots of dirt and gravel, and cedar trees. 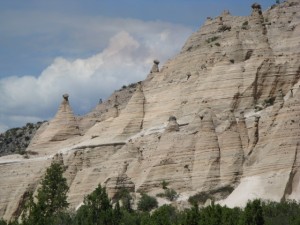 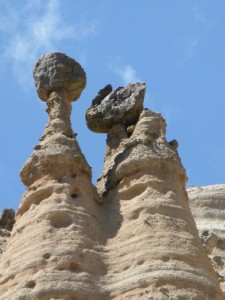 By the time I was finished with the walk and driving back towards the library it was now open so I could update you with my newest explorations.  I will be at this campground until next Friday, September 17th. Then I head towards Albuquerque.  The lake at the campgr0und is still closed to boating and fishing. I asked why and was told that due to the recent fires the lake is filled with ash and debris.  The firefighters used it as a base camp and also as it has been raining the ash and debris are still washing down the mountains and flowing into the rivers and lakes.