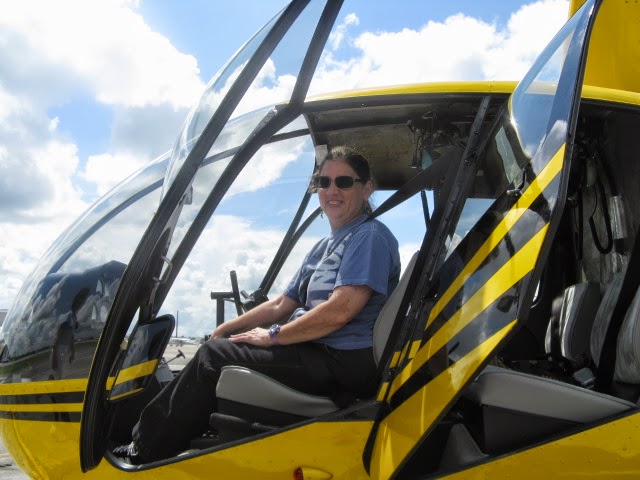 Today, my friend Pam, her husband Jeff, and I went up in Randall Opat’s helicopter. I met Randy at the fundraiser for Arnold’s Wildlife Rehabilitation Center, he is on the Board of Directors for the wildlife center and he graciously donated helicopter rides for the fundraiser. Randy met us at the North County Regional Airport in West Palm Beach and he escorted us across the airfield to his bright yellow R 44 Raven helicopter. As we walked towards Randy’s helicopter we saw a large old style military airplane. Randy said it’s a 1965 DeHavilland Caribou that was used for several military operations, and also used by the Golden Knights Parachute Team. If you want to know more about this aircraft, it’s mission, and see more pictures, do an Internet search for N600NC. Randy told us he is certified to fly almost every type of aircraft, he’s also qualified to teach others to fly.

If you want to come along for a virtual ride with us, here’s a direct link to all the pictures. Photo Album. 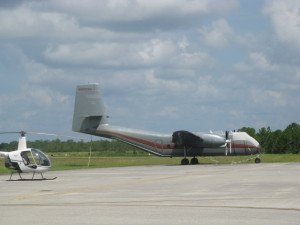 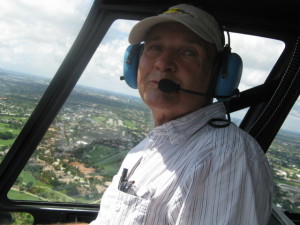 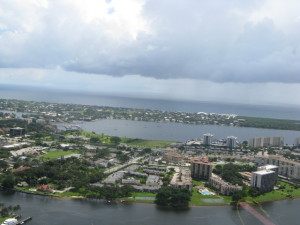 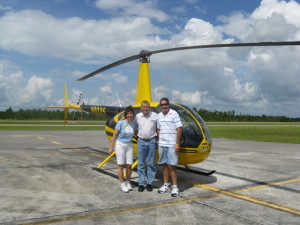 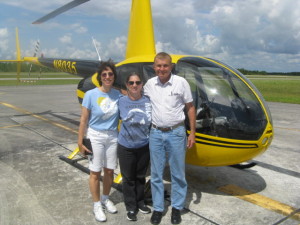 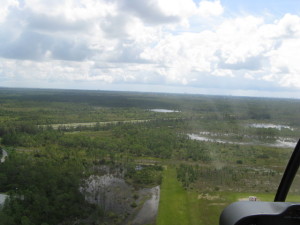 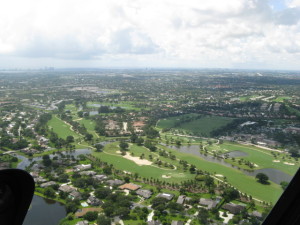 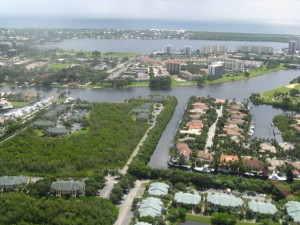 It was our first helicopter ride, and of course we were really excited about this new experience. We flew over so many interesting sites, including John D. MacArthur State Park and Jonathan Dickinson State Park, both of which I have visited. It was very different seeing them from the air, rather than walking through them. John D. MacArthur State Park has a nature center, and a bridge across a shallow waterway to the ocean. Jonathan Dickenson State Park has camping, a boat ride to an old trappers cabin, and lots of trails across the prairie. I had no idea how many acres these state parks encompassed. Looking at them from the air it was really evident how large they are, it is very different than reading about it in the informational brochures they distribute at the parks. 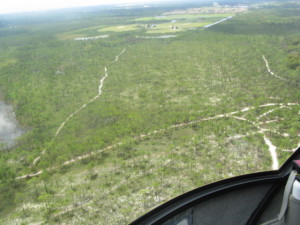 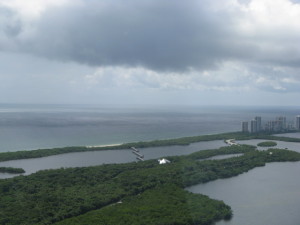 We also flew over Peanut Island which is in Riviera Beach, Florida. It was created in 1918 when the inlet was dredged, it also features a blast shelter built in secret for President John F. Kennedy shortly after his 1960 election. President Kennedy spent winters in nearby West Palm Beach and the shelter was built in case it was needed for the president’s safety. As we were flying over Peanut Island we saw a house being moved on a barge, that was pretty cool to see. I don’t think I’ve ever seen a house being moved on the water before. 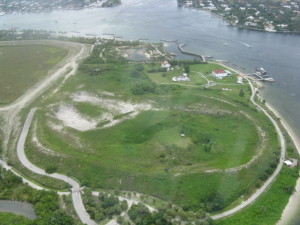 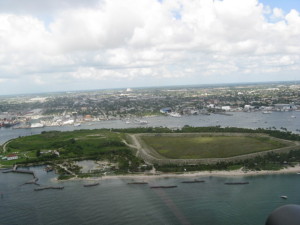 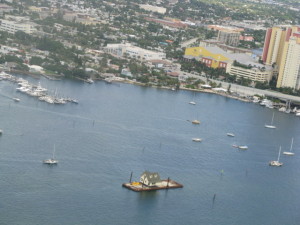 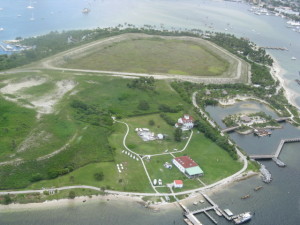 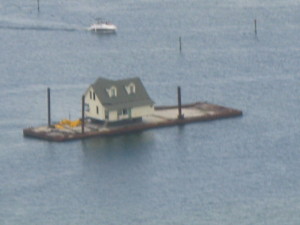 As we traveled north over the ocean we were watching for sharks, manatees, and other wildlife. We did see a large school of fish and a few individual sea turtles swimming. We also flew over Blowing Rocks Preserve where when the water level is just right, the water washes along the shore, through this particular type of rock and blows up through the rocks into the air. We didn’t see that happen, but we did see the rocks along the shoreline. We also saw several reefs, and flew past the Jupiter Lighthouse. 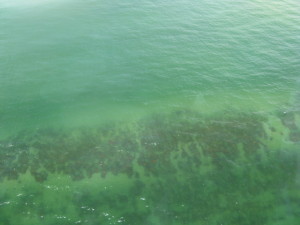 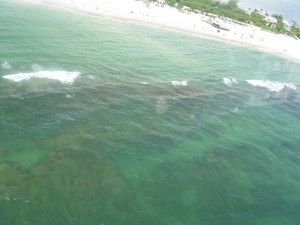 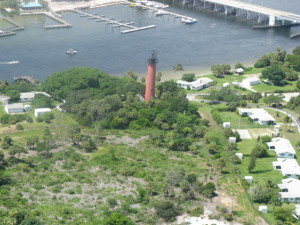 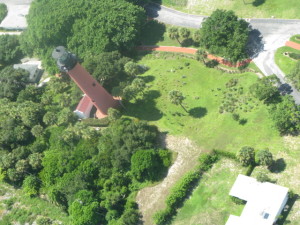 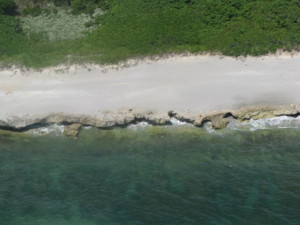 Randy continually pointed out various site of interest. He flies over this area frequently so he knows so many stories of the places we flew over, including several buildings, houses, etc. It was really interesting listening to his stories about his experiences. We also flew over Tiger Wood’s house, and Celine Dion’s house. Their houses are beyond belief. Tiger has a golf course, lap pool, swimming pool, and much more. Celine’s house has a water park, and direct beach access. She had to have a well drilled because her water park uses so much water. I have no idea how someone would drill a well when the land is at sea level. 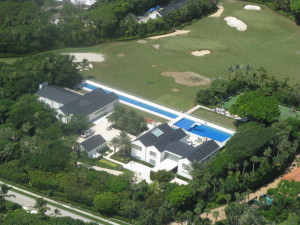 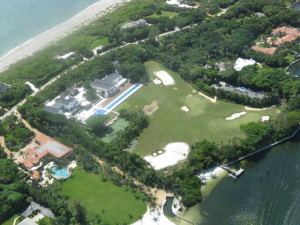 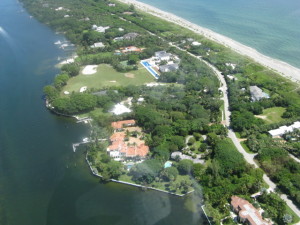 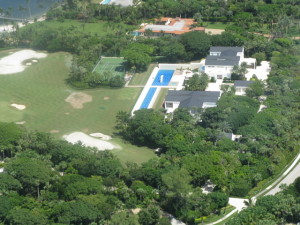 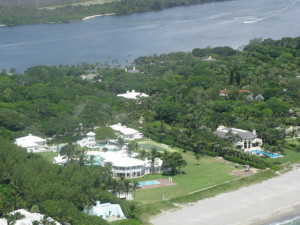 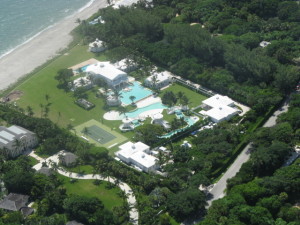 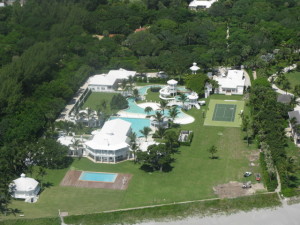 We were continually aware of the storms in the distance, and what direction they were moving. We had the same thing when we flew in the blimp since there were storms in the distance then as well. If you are wondering what the difference is between our blimp ride and helicopter ride, they were the same in that we were airborne and had to wear headphones to communicate with each other. The blimp flew at a higher altitude so we were not able to see things on the ground in detail, we were able to change seats to see different views, and the ride was smooth. The helicopter flew at a much lower altitude so we were able to see the landscape in great detail, we were not able to change seats, and the ride was a bit choppy, probably due to the storms around us. Pam, Jeff, and I loved being up in the air and would do it again in a heartbeat if the occasion presented itself. We are so grateful to Randy for taking us up in his helicopter for the ride and for being such a gracious and caring host. After we landed we saw the sky getting lots darker as the storm got closer. 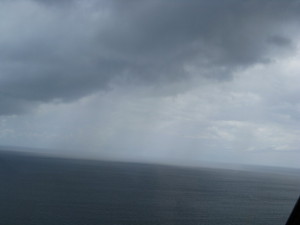 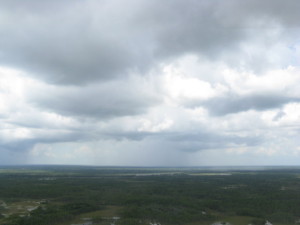