I arrived in Longview, Texas, early this afternoon after finishing my crewing tasks in Shreveport. I came early so that I could help assemble pilot packets and do pilot registration. Thankfully, at Maud Cobb Convention Center where the pilot registration took place there is a campground with electric hookups so I am staying here until Friday morning when I have to move out to the regional airport where the balloon rally takes place. There is no electricity there so I will do the best I can to stay cool when I am not working the gates or crewing for a balloon. Several pilots that were in Shreveport also came to participate in this event, and I also saw several balloons I had not seen before which is a nice surprise. Several pilots I have met at other events and it was nice to see them and catch up on life. There is an album with all of the pictures I took at the Longview balloon rally.

Since I was there a few days before the competition began, and there was time for some practice flights, I went around to various pilots asking if they needed crew. I found a couple from Longview, Joe and Lynn who have a balloon repair business and it was just the two of them, so I crewed for them the entire time I was in Longview. It worked out pretty good and I did some tasks I had not done before which made it more interesting for me. It’s very different crewing when there are only 3 or 4 people than when there are 6 or more. Joe didn’t usually many choices where he landed and twice it took us quite a bit of time and effort to get to him because we couldn’t find the roads to get back to where he was, or we finally got to where he was and had to find people to open gates so we could get into a pasture. One day we landed in a locked gated pasture that took us about an hour to get to and when we got there I realized I was in that same place last year when I crewed for a different pilot. One morning after we were packed up and driving back to drop me off at my camper, we passed a balloon that landed near a main road and the crew was having trouble handling the balloon envelope with the winds blowing it towards the road. Joe did a u-turn and we quickly got out of the truck and helped the crew get the balloon down and thankfully there was no damage to the balloon or any of the crew. It was a bit scary for a while when the winds kept trying to take the envelope towards the road, a mailbox, ditch, etc. we were glad to be able to help.

Joe and Lynn’s balloon is called the Spirit of Texas and it displays five different Texas flags from different periods of time. The balloon envelope is about 69,000 cubic feet and it is a traditional shaped balloon. For some reason it seemed a larger size. Joe said it could be because of the wide white band in the design. One of the mornings we were on crew we stopped in a parking lot of a gas station and Whataburger and we watched the balloons fly in over the target. We decided we were hungry so while waiting for Joe to fly in and over the target we got something to eat. Some of the balloons went really high so they could catch the directional winds they wanted and drop down to the target. When that happens the balloon envelope gets to be a different shape since the winds are blowing the envelope in different directions. 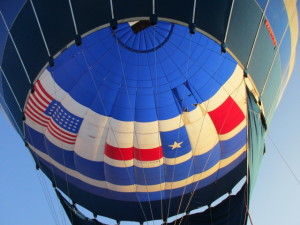 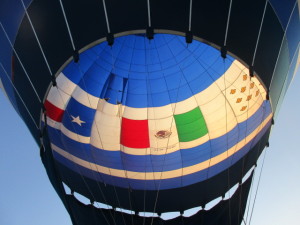 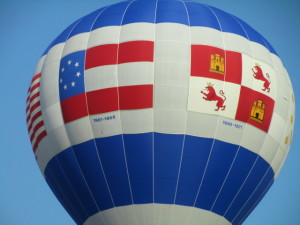 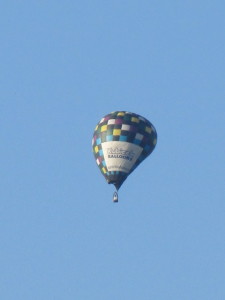 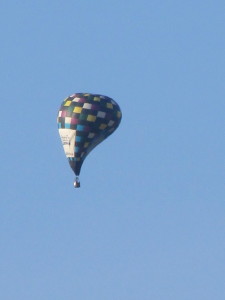 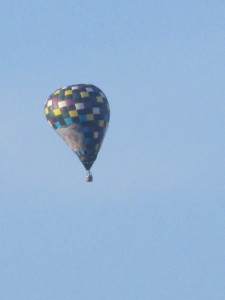 There was a party on Thursday night for everyone and it was lots of fun. On Friday afternoon I went to the gate for my assigned times, and after working the gate I went to get something to eat and then went to help Joe and Lynn set up their balloon for the glow. We also were able to listen to the concert and see all of the other balloons around us glow. It is really beautiful when the balloons glow in the dark. It’s not easy to get good pictures, especially when I am trying to hold the balloon basket down and snap photos. 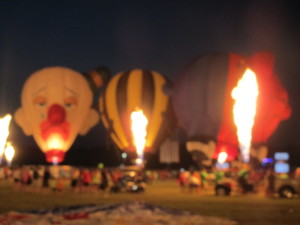 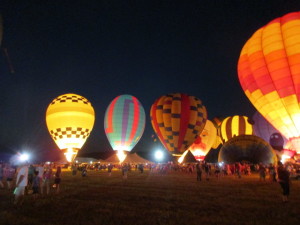 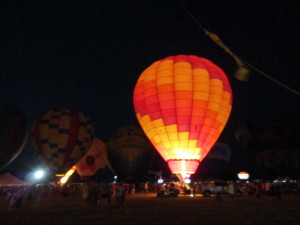 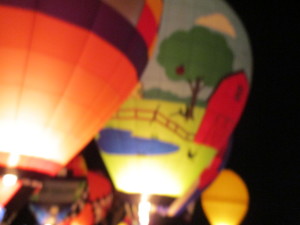 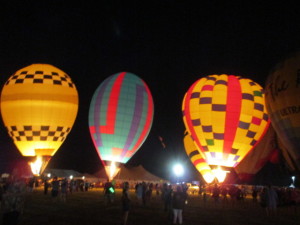 It was fun watching the balloons flying over the target, it takes a lot of skill and dependence on the winds to get the pilots from more than a mile from the target to navigate the winds at different altitudes to get the pilot to fly over a target at a designated location. Sometimes they are able to catch the winds to get them there and sometimes they aren’t. Also, when they drop their marker or beanbag down to the target, the winds can catch the item and not let it go straight down to the target. One morning I saw the moon in the sky when a balloon was flying and another morning the sun was behind the balloons, these gave me the opportunity of taking unusual photos. Another interesting picture I took, was a bird sitting on a power line and as a balloon got closer, I took a picture where it looks like the bird is almost sitting on the balloon. 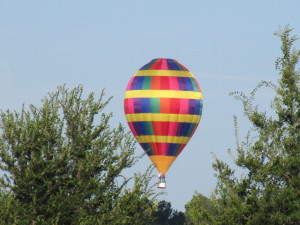 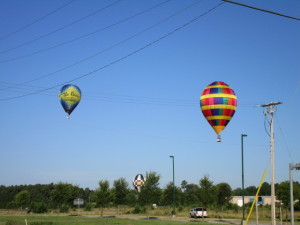 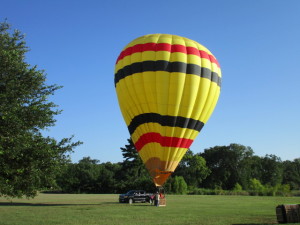 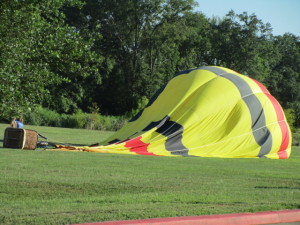 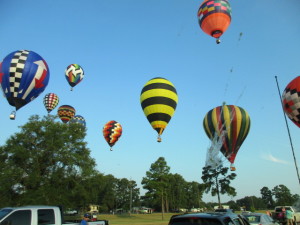 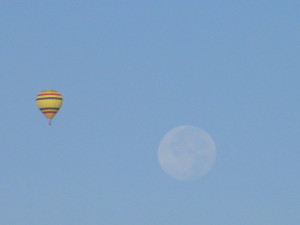 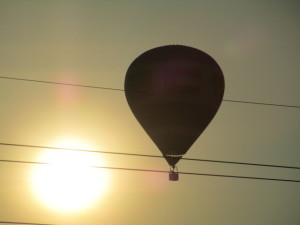 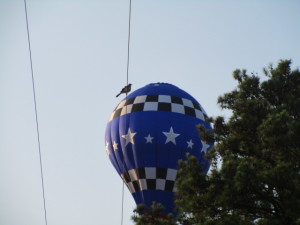 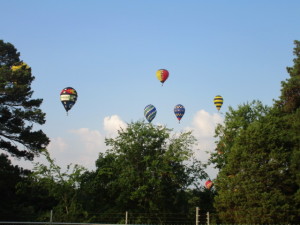 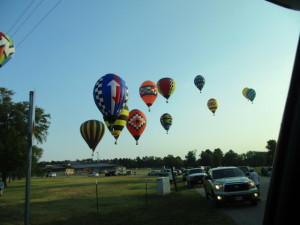 On Saturday afternoon, I worked my shift at the gate, got something to eat, and saw that the weather was getting bad. We could see rain off in the distance and hear the thunder. Then the lightening began and we knew that the balloon glow would be cancelled. Then the heavy rains came and everyone ran to their vehicles. It was too bad the weather turned rainy and most people left. About 10:30 p.m. or so I looked out my back door and saw a balloon or two inflate, and I heard music. The concert started late, and the band performed until early morning. I still heard the music about 12:30 a.m.

On Sunday morning I crewed again for Joe and Lynn and after we got to the field where the balloon landed and it was packed up I was driven back to my camper and I packed up and drove to Crowley west of Fort Worth to visit my friend Sue for a couple of days.