Surprise!!!  I unexpectedly have Internet connection tonight.  I stopped at Jordanelle State Park in Utah to camp for the night, and I thought I would type my narrative for the day and upload it when I find Internet sometime. Since I had my computer on, I checked to see if there was wi fi, and I was surprised to find this campground has it, and it’s free with no time constraints, so I can provide this update today when it happened.

I also created a photo album for the pictures from today, including scenery along the route from Idaho and Utah.

I went over to Pat’s campsite this morning and thanked her for her hospitality, and also the travel information and told her I was glad that we got to meet. We are going to try and connect again in Texas in November if we can.

After filling my water tank and emptying my holding tanks, I left Lake Walcott State Park in Idaho and headed south into Utah. It was a nice drive, I had to take mostly the interstate since there were not many good back roads down into Utah.

It was really interesting to find out the story about how this railroad was built, what endurance, hard labor, materials, and other challenges had to be overcome for this railroad to be built and completed. I got to see some of the tools that were used, and learned that some days only inches were cleared in the granite mountains where tunnels had to be dug by hand and some black powder. I also saw the final cut that was made in the landscape in order for the two railroads to join. The graders all along the trail had to make sure that the grade was no more than 2% in any location. 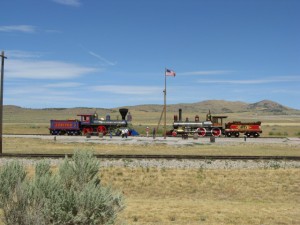 Irish, Chinese, immigrants, ex slaves, and Civil War veterans were among those who did most of the manual labor. If you want to learn more, the website is www.nps.gov/gosp. They had replicas of the two steam engines, one from each company. They also had the engines on a track with the rails and timbers from both railroads. It was very interesting to see the difference in the railroad ties. The ones from the Union Pacific Railroad were handcut and were wider, flat on the ends, and heavier. They were made and provided by the Later Day Saints and Brigham Young. The railroad ties from the Central Pacific Railroad were more narrow, all the same size, and were cut in lumber mills and were uniform in size and shape, where as the Mormon ties as they were called were not since they were each handmade. You can see the UPR ties on the right, and the CPR ties on the left. 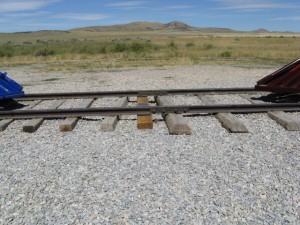 It was interesting to learn about the process to build the first transcontinental railroad. After I left the Visitor Center, I drove to see where the last cut through the mountain was made, it looks like a ditch now. And from there I was able to see Great Salt Lake which really looked like a dry lake to me, it might be low tide. 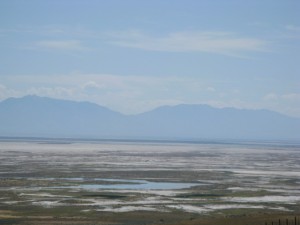 I then headed south and then east, avoiding Salt Lake City and going east near Ogden towards Provo. I stopped in Park City and got a late lunch, took some pictures of the mountain where the ski trails show as green trails down the mountain.

I drove a bit further since it was only about 3:30 p.m. I found a sign for Jordanelle State Park and it was just off the highway and it looked like they had campsites. What a great find!!! 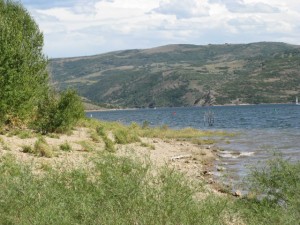 This is a really large state park on a lake with several campground areas, including electric and water for $20 per night. I found a campsite that is a pull through, and I look across the road to the lake. I took some pictures and if you look at some of them you will see about halfway up the mountain you can see where the highway goes across the mountain. 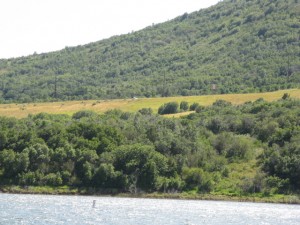