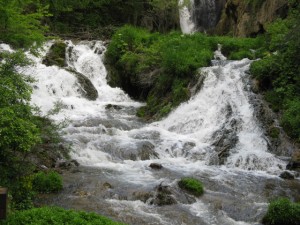 Sunday late afternoon, I left Bear Butte State Park in and decided to head towards Devil’s Tower in Wyoming. I took the scenic route through Spearfish Canyon in SD. I stopped at several waterfalls along the way. One of them was about a mile walk up a trail, it was worth the walk. At the bottom of the path I could hear the wind. As I got further, I could hear a brook, then see a pond with ducks. About midway up the path I could begin to hear the waterfalls. It got cooler as I got further up the path and closer to the falls.

I traveled scenic route 24 to Devil’s Tower and I walked the 1.3 miles around the base of the tower, stopping frequently to take in the energy and sounds of nature. On each side there was a different feeling and energy. One one side there was calm, hardly any wind. On another was lots of lichens that were yellow and green. On another side I could feel and hear the wind blowing very strong. Watching the clouds float over the top of the mountain was another site to behold. At one point, it looked like clouds were traveling in opposite directions. Due to the strong wind current they clouds moved really quickly, it was the fastest I have ever seen clouds move. It was the complete opposite of watching clouds over the Grand Canyon where they did not seem to move at all due to the vast distance across the canyon. 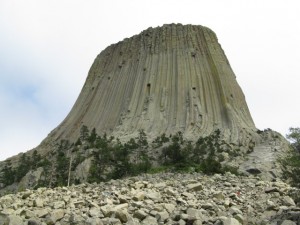 Well once again I was on the road. Even though I have seen it over and over on the trip so far, I am still amazed and in awe of how quickly landscapes change. They seem to change over every hill, around every turn, on the other side of a mountain, it doesn’t seem to matter what span of distance. Sometimes it’s different every half mile or so.

I left Devil’s Tower and headed towards Yellowstone National Park. I knew it was too far to drive tonight, but I thought I would get as far as I was able to drive so I could arrive earlier in the morning in hopes of getting a campsite inside Yellowstone. I didn’t have a reservation since I didn’t know when I would arrive there. I got to Gilletter, WY and the sky got dark and it started to rain so I stopped and got some gas and took a break until the rain stopped. I thought great, I could drive for a while more, the sky looked like it cleared. About 15 minutes later, the sky got really dark and it started to rain lightly. There was nowhere to stop so I kept driving. Then after I went a little further I could see blue sky and sunshine. The road curved towards the sunshine and I thought great, then it rained and in the rear mirror I could see a full arc rainbow. Driving west, towards the south the sky was black and I could see it raining. Towards the north the sky was blue and sunny. Very strange. The dark clouds were really low, they loomed above the road it seemed.

I thought I might be able to drive toward the town of Buffalo since it was about an hour and a half or so and it was only 7 p.m. It gets dark about 9 p.m. And it’s light by 5 a.m. I went up Bighorn Mountain and after about 45 minutes of driving up and down STEEP and winding roads, my check engine light came on. I thought that was strange. The van seemed to be working okay. It was thoroughly checked out before I left on the trip. It was getting more windy since I was up over 4,200 feet. I wasn’t sure what was happening and if I wanted to risk driving about 50 more miles to the next town. I thought it would be safe, but I didn’t want to risk something happening and me being stranded on a mountain road in the dark. So, I saw a National Forestry Campground (there were lots of them on that road which was 16, which is a major scenic road to Yellowstone) and I pulled in there and got a campsite for the night. It was about 8:30 p.m. My campsite was across the road from a beautiful lake and I got to see it until it got dark.

When I went to sleep, I put a wool blanket over me, I had a feeling it was going to be a cold night, since when I walked to pay my camp fee, it felt about 60 degrees and windy. I was pretty sheltered from the wind under large pine trees. It was 68 in the camper when I went to sleep and it was 47 degrees when I woke at 5:30 a.m. I prayed while driving that we would be safe and that nothing serious or expensive was wrong with my camper. She has been doing a great job of getting me around, I’ve driven about 3,000 miles so far.

I woke up, got ready for the road trip, turned on the van, and the check engine light was still on. I had a little over an hour drive to the town of Worland which was the next town of any size. Ten Sleep was a town on the map, but if you blink you missed the town. I got to Worland and stopped at the first service station. The man there told me there was a Dodge and Ford dealer a few blocks down the street, so I headed that way. I went into the service center and told them my situation. The immediate response was that it was common when up in a high altitude, especially coming from lower ones, that the vehicle was getting less oxygen and a sensor caused the engine light to come on. I was told that the sensor would clear itself in a short while and not to worry about it since the van was running okay. Sure enough, in a little while the light went off. I was so thankful and know my prayers were answered. I have so many great thoughts and wishes and spirits with me on this trip. I feel them all the time.

When I left Florida, I had either the radio on or played songs using my MP3 player. Then somewhere along the way, I think in Illinois or a little before, I turned all music off and just watched the scenery and talked with God. I seem to be more aware of the surroundings and scenery and how it changes, and seeing the different colors of wildflowers, animals grazing in the fields, etc. It’s really peaceful and calming, even when driving some of the roads that take all the concentration I have and then some. There are some times I wish that someone else was driving and that I could be a passenger looking at the scenery more closely and taking pictures of the trip. So many times I see something that would be a great photo, but I can’t stop or it happens so quickly that I pass it as I notice it. Some of the more challenging roads, the ones that are steep either up or down, and have really sharp curves, sometimes 180 degrees, and an 8% grade are not fun. I’ve learned to use 2nd gear a lot and to step hard on my brake a few times rather than holding it down to slow me down. The weight of the van makes it go faster down the hills. I don’t take risks and mostly there have been few vehicles on the road so I can drive at a pace that makes me feel safe and comfortable.