Today we ventured out and in order to overcome my hesitancy to drive my camper on ferries, Patt said we could take an outing today in her car and drive to some islands and peninsulas and take several different ferries.  Patt has been really sharing some interesting stories about Seattle, the art work, neighborhoods, and sights. Our time together has not only been fun, but very educational and informative for me. Such as seeing the troll under the bridge which by myself I would not have known about.

We took a ferry from Seattle to Bainbridge Island and it was really interesting to take the ferry. We saw a tanker loaded with cargo containers. It left a really long, large, wake and we just barely felt it.  On the ferry, there was a guy feeding Cheetos to the sea gulls. He held the Cheeto in his fingers and the gulls flew by and took them out of his hand. It was really interesting watching them hover and balance themselves in the air while gently taking the Cheeto and not touching his fingers. Seattle photo album. 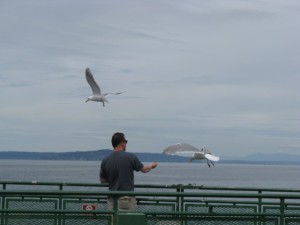 Getting on and off the ferries was impressive. I’m sure they have done it many thousands of times and it showed. It was very organized and orderly. One of the ferries we had to wait in a line for over an hour. One of the ferry lines went along one line of a road up and down hills for more than a mile. They have a special lane only used for vehicles waiting to get on the ferry. Along the way, there were signs telling how long of a wait there would be from a sign point. 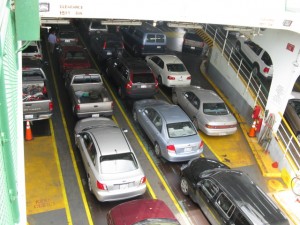 We stopped in a small old logging town which was really quaint. The buildings were all painted nicely and the town was small but very well kept. It was called Port Gamble. I liked the sign that told people to give loggers the right of way. 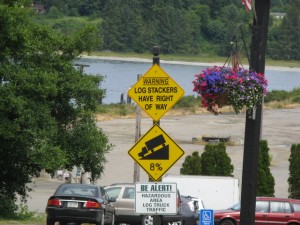 After exploring the general store, we drove on through several other towns and came to another ferry from Port Townsend to Whidbey Island (the longest island in the USA).

Before catching the last ferry, we stopped into an organic coffee shop, and we heard some nice fiddle music playing and were pleasantly surprised when we saw a group of 5 musicians sitting in a corner of the coffee shop playing their fiddles.  We had thought it was a CD when we first heard the music.

Then we drove to take our 3rd ferry which brought us back to the Seattle area to a town called Mukilteo.  We really were hungry, so after we got off the ferry we at a fantastic seafood meal at Arnies Restaurant. We got a seafood pasta dish and also a grilled mixed seafood dish. We shared both dishes and once again our tastebuds and stomachs were more than satisfied.  We also had a table by the window so we could watch the ferries load and unload, and watch the waterway and sunset.  It was a great scenic view with the mountains, including snow covered ones in the far distance.

We used my handy, dandy, GPS (she) to find our way back to Patts house, and it did pretty good. She routed us on a road that took us past the Boeing plant where airplanes are built. It was a really impressive sized group of buildings.  I’m still getting used to using the GPS and having it provide the correct route I want. She still has no name and a mind of her own!!! We are learning to compromise and find mutually agreeable routes.  Sometimes I have to put in additional destinations along the way to get the correct routes I want to take.

Later this week I will be heading towards Mt. St. Helens and Mt. Rainier, then on to a pow wow in Auburn, WA.