A few weeks ago I noticed a bird making a nest on top of a covered column outside my front door. Then a few days later I saw an egg in the nest. A week or so later I saw a half egg shell on the catwalk outside my door. I kept watching the nest to see what was happening. The mother bird would disappear for hours, and then return. Another week passed and I saw two little heads above the nest. 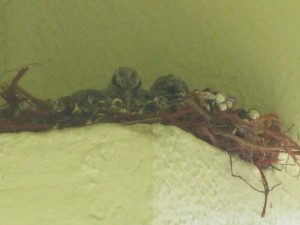 Sometimes I would see the mother bird along with the two babies. The other day the babies took their first flight from the nest. I didn’t see them fly, but saw them in another location, now over my living room window. The second day on the ledge above my window they were still there and then the following morning they were all gone and have not returned yet. 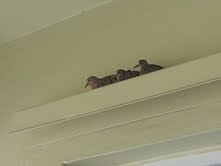 Thanks to my friends, my door poster is getting filled in with more pictures. I’m really enjoying seeing it evolve. I’m happy that I had the thought to make this poster. Several people have commented that they also like this idea and they are either going to make one or tell others about it. Anyone can make one and hang it on a wall or door, it would also be a great gift. It’s a great way to see pictures of friends, family, places visited, things that have meaning to us. It’s lots better than having them in a box or computer file. My friend Paula in Montana sent me an envelope with 16 metallic looking colored streamers with a star on the bottom, so I hung them on my poster and all around my apartment. It’s getting to look very festive in my apartment. 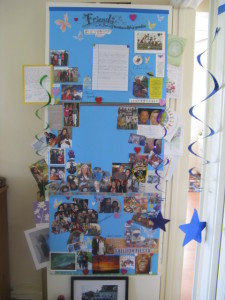 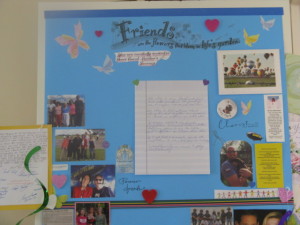 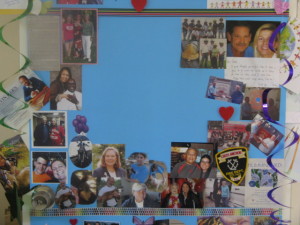 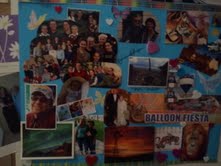 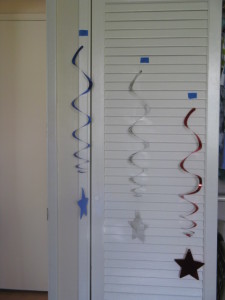 Another thing I’ve been doing to keep busy, besides reading, is doing jigsaw puzzles. My friends that come over also help work on them with me. So far, we have finished two puzzles, one was a map of the USA, the other was the scene of an old fashioned sweet shop. This puzzle was not only a puzzle of the sweet shop, but it also had 116 common items hidden in the puzzle which we looked for before we took it apart. For example, the ceiling consisted of dollar bills and the back of playing cards, the walls were waiter checks. Ketchup and mustard containers on the counter were really tips of red and yellow crayons, the chair backs and legs were pretzels. We were able to find all 116 items, some were a little difficult to find but we eventually found them. 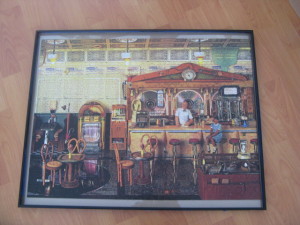 The map of the USA had lots of significance for me. The past several years I was able to drive around the country and I drove through many states. The animals at the bottom of the puzzle had lots of meaning to me as well. When I was in Glacier National Park I saw a moose up close, when I was in Grand Teton National Park I was talking on the phone on the shoulder of the road, where I had cell phone reception, and all of a sudden a moose ran across the road in front of me. I saw several bears in Yellowstone, Grand Teton, and Glacier National Parks, and I have a friend named Bear. I saw deer in so many state and national parks, and I saw a Bald Eagle in a south Florida park and I have a friend Albert Gray Eagle. As I did the puzzle I remembered my trips, the places I visited, and my friends. 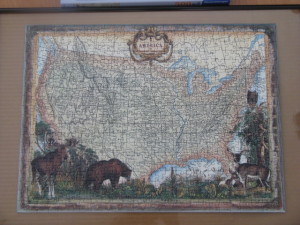 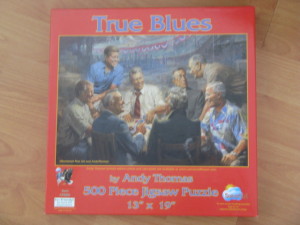 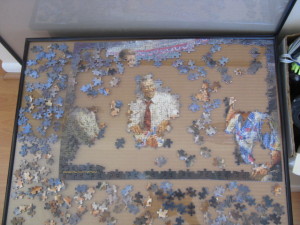 The current puzzle is a really difficult. It’s called True Blues an it’s eight different presidents such as Kennedy, Clinton, Carter, Johnson, Roosevelt, and three others. After this is finished, I have five other puzzles waiting to be put together. It should keep us busy for a while. I found that using a plain poster frame with a simple black border is great to use as a puzzle board. It’s fairly lightweight and depending on the size it has room for puzzle pieces around the puzzle. Or use a separate frame for the pieces and one for the puzzle. 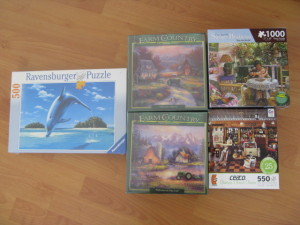 As for my health, I’m still managing on my own. I occasionally have days that are relatively pain free, thankfully. I can still drive, cook, and do most things by myself. Other days I’m having more pain and have to take my medicine more frequently. I can tell the tumor is growing by the way it’s affecting my insides, and my back is now hurting. I’m still able to eat and drink liquids, but not as much as I used to. I eat pretty much what I want and try to find new things for snacks. Ice cream is still pretty close to the top of my list, it seems to go down easily, and it tastes good. I did speak with Hospice ten days ago, I filled out the paperwork, but told the nurse that I’m not ready yet. As long as I can still take care of myself, Hospice will have to wait. After the paperwork was completed, the nurse called my doctor and her supervisor and said the paperwork was completed, but I’m not ready yet, that I’m still working on my bucket list. She said that normally they would encourage patients to start services at my stage, but she said that after meeting me, she thinks I’m doing the right thing by waiting. She said I inspire her and she loves my poster idea and is going to share it with other patients.

I am so fortunate to have such great friends, they continually call and ask what they can do to help me, or if there is something they can do for me. I finally said yes and one came and washed out my bathtub, a chair, and stool because I can’t do it. I’m so blessed to have such caring people surrounding me. I know what’s happening with my life is difficult for everyone. Other than physically, it’s not really difficult for me. I’ve lived with my health issues, and knowing it would shorten my life, for most of my life. I feel that for many years my life was like Russian Roulette, when would the cancer come back, what would this biopsy show, what would the next operation be, when it would be, etc. For everyone else it’s pretty new to their knowledge, so they are having to adapt to it and I know it’s not been easy. Despite the fact that it’s difficult for them to deal with, rather than distancing themselves from me, they are staying in touch with me. I am so thankful to them. I also know that I’ve been a great friend to them as well.

Many of them tell me how much I’ve helped them think about things differently, in so many ways. Especially on what they want to do with their money after they die. Several like me have no children and didn’t know what to do with their money, others have children but didn’t want to give them all their money. Now they have some ideas for what to do, they are looking for charities that mean something to them that they want to support. Some are donating to the various charities I support, including volunteer fire departments which are always in need of funds to purchase equipment. I’m also finding libraries in rural communities that need money to buy books for children and books teaching them to read, audio books for adults that aren’t able to read or see very well. Some rural communities have residents that are so poor that the parents can’t afford to buy books for their children. Donating to these needy libraries, and saying that some or all of the funds can be used to buy books to give these children, will allow the libraries to give books to children which they can call their own. Buying books for these libraries also allows them to have book club sessions with groups of readers. This is getting people more inspired to read, because they can read the book and discuss it with others that are also reading the same book.

I’m also learning about so many animal rescue groups that really need funding. Such as horse rescue groups, dog rescue groups, etc. Because the economy is still causing many people to make decisions whether or not to keep their pets due to financial situations, pets are being abandoned. In order to save the animals lives, these rescue groups are taking the animals in rather than have them be killed. It costs money to feed, care for, get medical attention when needed, and house these animals. The same with donating to wildlife care centers. This allows children and adults to have the experience of seeing rare and endangered animals which might be extinct in a few years. We can help to save the lives of these animals so they will be around for many more years. There are so many worthwhile organizations that need assistance. Personally, I choose to donate to small privately owned organizations, along with rural libraries, volunteer fire departments, etc. because I know the money is used for the purpose intended, and they don’t take administrative fees, all money goes directly to the cause to purchase what is needed.

At the moment, I don’t have plans for any other adventures. I’m guessing I will be having more experiences and I will add them when they happen. Thank you again for reading my stories and keeping in touch with me.