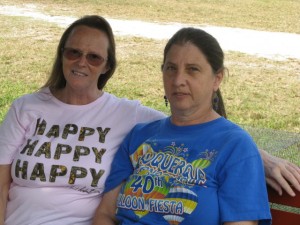 My friend Cindy came to visit me today, while she was in the area to visit friends and relatives. I’m so happy to see her, before she moved away we often did things together. In April this year, I went to visit her and we had fun going to Savannah, Amelia Island, etc. Cindy booked a horse and carriage ride for us through Amelia Island, it was great fun. There are several stories and albums in my early April 2013 posts. 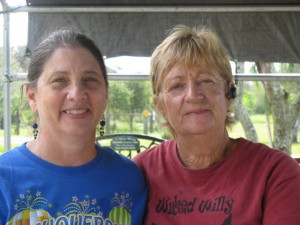 I was thinking what could we do that would be a special, memorable, experience for us??? A trip to visit Sue Arnold at Arnold’s Wildlife Rehabilitation Center was the perfect idea. Cindy and I both love animals, and she hasn’t been to Arnold’s previously. It was a great choice. I contacted Sue Arnold, who owns and operates the Wildlife Care Center, and she said she would be there. I always like seeing Sue too, so I make sure she is there when I visit. It’s about 100 miles from where I live, but well worth the trip. Now, it’s too far for me to make it a day trip there and back if I’m driving. But, I can go if someone else drives. I wish it were closer because I would go there more often. I haven’t been to Arnold’s since the middle of July. I usually talk with Sue about once a week, so I keep up with the new babies, or animals that are brought in for care. Here are links to my previous visits here in December 2012, May 2013, and July 2013.

When Cindy came this morning, I told her what I thought of as an adventure and she liked the idea. So we headed north. I had talked with Sue previously, and knew that she would let us feed treats to most of the animals so I stocked up on mini marshmallows, mini frosted shredded wheat cereal, and dum dum lollypops. Earlier this year when I was at Arnold’s, one of the other close friends who visit brought these treats and we gave them to the animals. The sky looked gray and cloudy, and we prayed that there wouldn’t be any rain, and fortunately, there wasn’t. We had perfect weather for this trip. 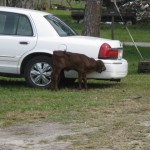 Upon arriving at the Arnold’s Wildlife Rehabilitation Center we were greeted by Jimmy the 2 week old calf. Jimmy’s mom wasn’t able to take care of him, so he was brought to Sue’s and he is being bottle fed and he wanders around the grounds. He thinks he’s a dog, not a calf. Sue’s dogs wander freely and also greet visitors. 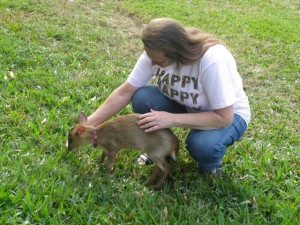 As we were walking around we also saw the 4 month old muntjac deer that was born at Sue’s 4 months ago. His mom for some reason didn’t take care of him the day he was born, he was in the sun and got blinded in one eye. He’s doing okay and knows his way around. He let us pet him and feed him shredded wheat treats. He was so cute. Sue told me about him the day after he was born, this is my first time to meet him.

We walked around the grounds stopping at all of the animal cages and I noticed that many of the animals were in different locations, and they were in new larger cages. Freddy who works there has been working hard on building new cages. Another friend Chuck helped to have a larger cage built for the panther and mountain lions that are best friends and share a cage together even though they are mortal enemies… everywhere except here. They were raised together and bonded.

Cindy and I had a great time watching the animals and giving them treats. Sue was with us so we knew which animals were friendly and what we could feed each one. It was really interesting watching them take it from us and then see how they enjoyed it. We felt like little kids and just felt the joy and wonder. After the animal would finish it’s treat, it would come back to the side of the cage where we were to get more. It was hard not to want to keep giving them more and more. We tried to be careful about the number of treats they got. Some of the monkeys sucked and enjoyed their lollypops slowly, others bit into them and ate them quicker. It was fun watching the marmosets and prairie dogs eat the mini marshmallows and shredded wheat. Some of them had one in their mouth and reached for another treat before they finished the first one. 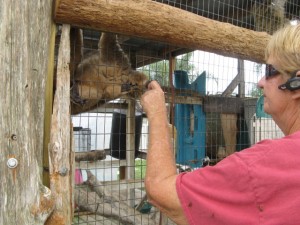 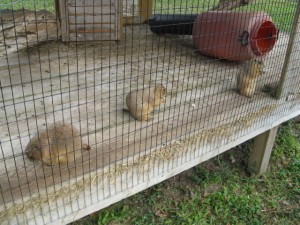 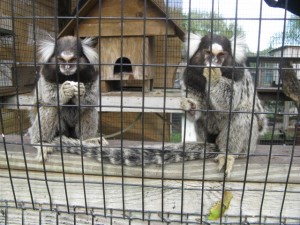 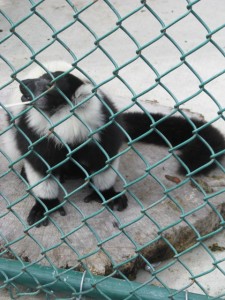 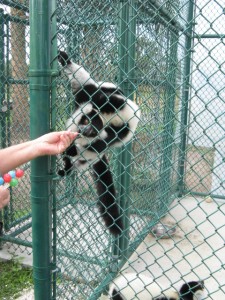 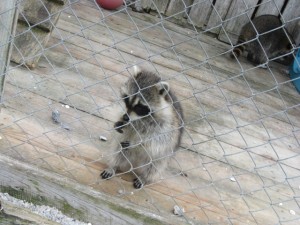 There are brown lemurs and black and white lemurs. They were so quick, it was hard to get pictures of video of them. I did get a little video of one eating a lollypop, but it I held the camera sideways and didn’t realize that I wasn’t able to rotate it once it was downloaded. If you go to the end of the photo  album of this trip, you can watch the videos.

Zeke the capuchin, whose owner years ago took out his teeth, is one of my favorite monkeys. I’m glad Sue now has him. I’ve watched him many times over the years. Zeke is the one that bonded with Matt the Goodyear Blimp pilot who visited Arnold’s earlier this year. Sue told me today that Matt called her recently when he was going to be flying over her place to let her know in advance so she could watch for him. When children are there for educational programs they always love to watch the blimp fly over, so Matt told Sue he would let her know in case she has a class. Matt then makes sure he can fly the blimp as close to her place as he can. I think that’s pretty cool, and special. 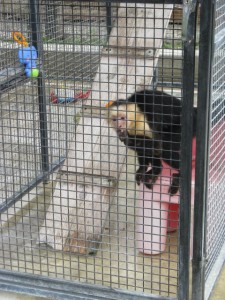 Anyway, since Zeke doesn’t have teeth, he has to eat soft foods like fruit and even lollypops. He seems to love the lollypops and sucks on them slowly. We gave him some fresh oranges sections and it was very interesting watching him eat them. Maybe next time I will get some video of him eating them. This time we just enjoyed watching him. He would take the piece and suck it a little with his head tilted back so the juice would not be wasted. Sue said that many times in the wild the animals may not have a water source that they eat in a manner consuming all the liquids they can from their food. Zeke also took the orange sections and ripped the membrane open to get to the flesh. As he did, when he got to a seed, he would take it out and put it down, then get back to opening the section and eating it. Then he would take the empty membrane and suck on it to make sure he got all the juice out of it. I could see all the juice on his fingers and hand, I’m sure it gave him lots to lick on later on to make sure he got every bit of sweetness. It was wonderful to watch.

There is a black and while lemur that is fairly new to at Arnold’s and it seems to be very friendly. When we gave the other lemurs their treats they wouldn’t let us touch their hands, but they took the treat gently out of our fingers. This lemur let us touch and stroke his fingers and his fur that was close to the side of the cage, even when he was eating we could pet his arm, let, or part of him against the cage. What a great surprise and experience. I just wanted to cuddle him. His fur was so very soft. The fingers on the front paws has soft fingers with nails that looked like ours, but they have a little sliver of a hard nail in the middle, but it didn’t stick out like claws on other animals. His rear hands have an opposing thumb, and they fingers have longer claws, unlike his front paws. His palms and fingers felt like a very, very, soft dark brown leather. I’m glad that he let us hold his hand and pet him. 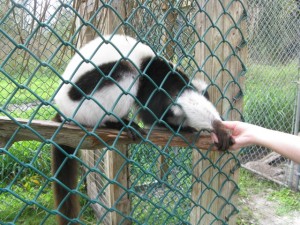 We all went and had lunch, and when we came back Sue said we could give more treats since it was several hours later. Of course, we wanted to do that and since there are orange trees on the grounds we took some oranges and peeled them and gave them to some of the animals, including Zeke, and also Foxy Brown the Fox Squirrel. I wrote about Foxy Brown in a previous story about Arnolds. She is quite the endangered animal, she shorted out a powerline and started a 5 acre fire several months ago and she got shocked and lost her fur. Thankfully, she survived with loving care. 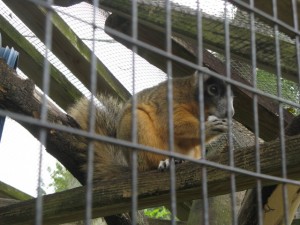 It got to be late afternoon and we needed to head south again. Cindy and I really had a great time with Sue and the animals. If you want a great place to visit and see animals up close and personal, including many rare and endangered species, come to Arnold’s Wildlife Rehabilitation Center in Okeechobee, Florida. In case you are looking for a worthwhile place to donate funds, this is one of them. All money goes to the care, feeding, and habitats of the animals. Sue and her helpers, Freddy and Angela, and the volunteers do an excellent job of taking care of the animals with love and caring that is visible. They are protecting them so that others can have the opportunity to know about these species for years to come. Their goal is to raise the animals so that the ones that can be released into their natural habits can be. Many people bring animals with broken limbs, or babies with no mothers to Sue. She raises them and releases them when they are healthy and able to survive on their own. Sue also takes in animals brought to her that can’t be released when their owners can no longer take care of them, or when state officials confiscate or find them.

An easy way to get to Arnold’s Wildlife Rehabilitation Center is take I-95 to either Blue Heron Blvd. or PGA Blvd. and go west to the end which is 710. Then make a right and go north for approximately 37 to 42 miles, and make a right on a country road named 128. You have to watch for this sign. There is a sign near the road that says Shooting Range, make that right and then go about 15 miles. You will see a blinking light, I think it’s at the intersection with 441. Then go straight at the blinking light for about 2.7 miles, there is a sign, then make a left, and Sue’s at the end of the street. It’s well worth the drive. If you go, tell Sue that you heard about her from me. Feel free to bring treats for the animals, she can always use them, or even gift cards for Walmart to buy supplies for the animals.