I spent the weekend and a few days early in the week at Arnold’s Wildlife Rehabilitation Center, in Okeechobee, Florida. On Saturday night, July 20th, Sue Arnold and friends held a fundraiser in Port St. Lucie.  I also included pictures from the several days I spent there and photos from the fundraiser in my album. There are lots of great photos of the animals, check out this photo album I took this visit at Arnold’s Wildlife!

This morning I decided to drive to Port St. Lucie to attend the Arnold’s Wildlife Rehabilitation Center Fundraiser event. A few days before the event, I was hoping that on Saturday I would feel good enough to drive the almost two hours there, and I did. So, I got my clothes and other things packed, and thought that I would take my camper Molly so I could stay out a few days and camp while I was going on an outing. A change of scenery and a camping trip are always good times for me. I haven’t been on a camping trip since I came back on May 1st, and I am ready for one.

It started raining as I was almost to Port St. Lucie, and because I arrived about an hour or so before everyone got there to set up and get people signed in, I was able to take a short nap. About 4:00 p.m. Sue, Barb, and others arrived so I went inside to visit with them and look at pictures of the animals that were showing on a television screen. Everything in the room was set up so nicely. There were lots of really nice silent auction prizes, and on every table were signs of various animal habitats that people could choose to sponsor. I met so many new people, the only ones I knew when I got there were Sue, her daughter Angie, Barb, and Trudy. By the time I left, I knew several others. 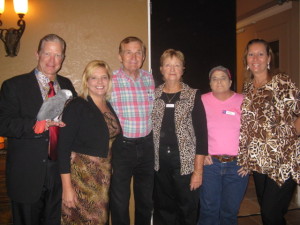 Sue and her group brought several animals to the event, an African Jungle Cat, an Opposum, a Hawk, a Fennec Fox, an African Gray Parrot, and of course my favorite… the Marmosets. Barb brought Katie, and Trudy brought Django. I got to see them at Sue’s when they were 6 weeks old, now they are 4 months old and still just as cute. Django had a tuxedo on and the little hankie in his pocket was the same color as Katie’s dress. I loved looking at them and admiring how cute and playful they are. They were a little bit larger than when I saw them a couple of months ago. I was the unofficial photographer at the event, I really enjoy taking pictures wherever I am, so it was a fun assignment for me. The room was a bit dark, so some of the pictures didn’t come out as bright as I wanted them to. 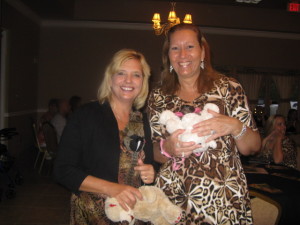 After about an hour or so, Barb came up to me and asked if I would like to take care of Katie for a while because she was helping at the event and needed to get some things done like working on the silent auction, among other things. I didn’t even hesitate to say yes. So, Barb handed me Katie’s leash to put on my wrist, that’s in case she decided to make an escape attempt, and she showed me how to hold her. I was in heaven. Katie was holding on to her stuffed animal which is her security blanket. She likes to hold on to it and snuggle with it. She was wearing the most adorable pink dress, she didn’t seem to mind wearing clothes, I think she’s used to it. I fed her a grape, some cheese, and a piece of melon. She took small bites of these foods and enjoyed eating them. She liked me to pet her and snuggle with her, and every now and then she would take a bite of her snack. Once in a while, Barb would stop by to see if I needed anything, or to see if Katie was behaving. Of course, she was being so good, and I really fell in love with her, she’s so soft and cuddly, her head is about the size of a walnut. About an hour or so later, Barb stopped by again and thought it was time for Katie to have her bottle, so she got it out and I fed it to Katie. It’s not really a bottle, it’s a syringe with formula. It’s the first time I have ever fed a baby animal. I used to give my parrot Chipper some fruit smoothie in a syringe, but this was a little different. Katie’s mouth is much smaller so I had to be more aware of how much formula she was getting at a time. What a great treat for me to be able to hold and feed Katie. A few days later, Barb let me know that I am now Katie’s Aunt Carol and I get frequent photos emailed to me. I wish I lived closer to them so I could babysit and play with her. 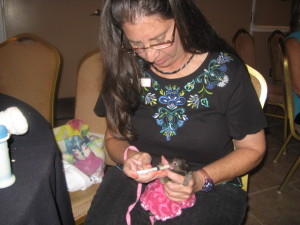 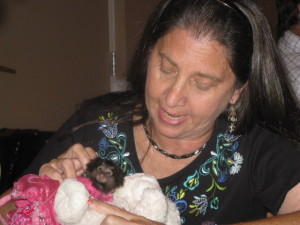 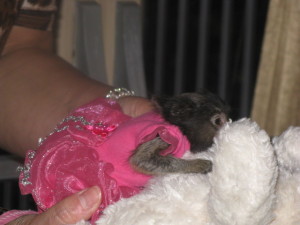 After the silent auction prizes were announced, everyone started getting ready to leave, I was invited to Sue’s house to stay for a few days, but I didn’t want to drive that distance in the dark, especially in the rain. So, I stayed in Molly in the Marriott parking lot. The next morning, I drove the 45 minutes to Sue Arnold’s Wildlife Rehabilitation Center, where I was going to camp for a few days. I always enjoy being there, and I always see animals that were not there on my previous visit and learn the story of how they came to be there.

This time, some of the different animals I saw were very young fawns, a baby bobcat, and a fox squirrel. I had never heard of a fox squirrel, evidently they are an endangered species. This particular fox squirrel now named Foxy Brown has a story, as do most animals. Foxy Brown happened to start a 5 acre fire somewhere in rural Florida. The firemen and state wildlife officers were investigating the scene of the fire to determine what caused it, thinking it was a cigarette or something similar. Upon searching the area they found a power line on the ground and near it they saw a fox squirrel unconscious and it’s tail looked like a branch, and it’s hair was burnt. It seems that this fox squirrel somehow caused a short in the line which sparked and started the fire. The wildlife official knew the fox squirrel is an endangered animal and he brought it to Sue. Sue worked her magic and now the Foxy Brown is healthy, happy, well fed, and has all her fur including a long bushy tail. 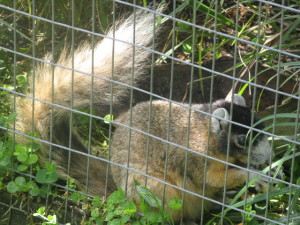 Another new animal is a Lemur that the Ringling Brothers Circus no longer wanted. He’s in the cage next to Zeke the Capuchin monkey. I love watching them play with their toys, explore their cages, and watch what’s happening around them. I stayed at Sue’s for 3 days, and during that time we fed the animals various foods. We even got to feed them some treats in between meals. That was the most fun. 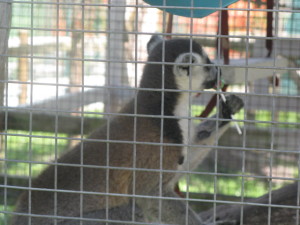 Seeing how the different animals ate their treats and what they liked and didn’t like was interesting. We gave the Ringling Lemur what we think was his first piece of an orange. He looked at it and then ate it and seemed to enjoy it. He ate it fairly quickly.

Whereas, when we gave Zeke his piece of an orange, he broke off a piece, peeled the membrane off it, and then sat up straight and put his head back when he put it in his mouth so all the juice would go down his throat and none of the juice would be wasted. He repeated this process until the entire orange slice was eaten. 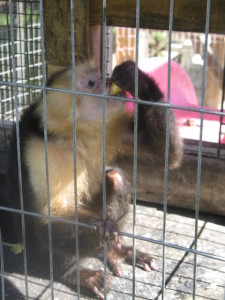 Another day, we fed Zeke and the Lemur marshmallows, mini shredded wheat cereal, and dum dum lollypops, and moist monkey biscuits. Again, they both ate their food differently. The Lemur ate quickly, and when he ate the lollypop he bit into it and finished it quickly. Whereas Zeke, sucked it slowly and he savored every lick. The same with the cereal, Zeke ate his slowly and enjoyed every bite. When he finished, he licked his fingers like we would if we ate something like chicken or ribs and had sauce on our fingers. It really was amazing to watch. I could tell by the expressions on their faces how much they enjoyed their food. 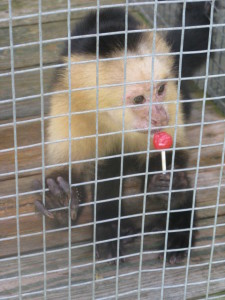 We also fed the prairie dogs, marmosets, llama, fox squirrel, raccoons, and other animals these meals and treats and they seemed to take their time eating them so they could enjoy them longer. Watching them eat, play, and interact with each other was so much fun for me. I also loved watching the otter when he was swimming in his pond. He would swim, then come up on the side of the pool against the glass quickly then go back in the water, and swim circles again and again, each time coming up on a different part of the ledge sort of like he was giving himself an extra workout. 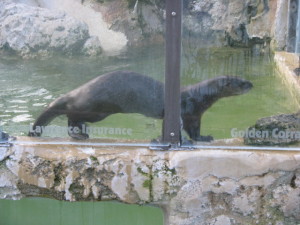 One of the most interesting things to experience at the wildlife center is seeing two bobcats and a panther living together, and even snuggling up next to each other, and grooming each other. In the wild, these animals are natural enemies. At Sue’s they are the best of friends, and they cry when separated. Sue has to have special written permission from some official government agency in order to allow them to be in the same cage. No one has ever seen these animals be so friendly to each other. They have been together since they were young. In fact, I saw them together several years ago when I first found out about the wildlife care center and came to visit. 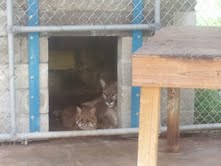 If you haven’t been around peacocks, they are very noisy and loud. They also like to fly up into the trees and perch on the branches, even in the rain. They sometimes seem to be a bit aggressive towards other peacocks and the males love to show off their plumes. Seeing all their feathers spread out is really a beautiful sight. The feathers they shed become great play toys for the cats. Recently, someone turned in a baby bobcat, she’s absolutely adorable. Sue put a peacock feather in her cage and the baby bobcat had such a great time playing with it. 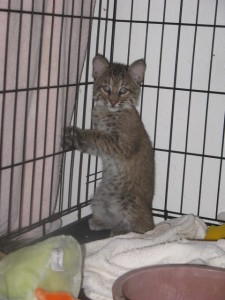 During the several days I was at Sue’s, several animals were brought to her for care, and/or a permanent home because either they could no longer take care of them, for example a miniature horse named Annie, a baby bobcat that was found and the person realized they could not keep it as a pet, and two injured birds. If you are looking for a worthwhile place and cause to donate money, I would highly recommend Arnold’s Wildlife Rehabilitation Center in Okeechobee, Florida. All of your donation will go to helping take care of these animals, many of which are rare or endangered.

On Tuesday afternoon, I had to say goodbye to Sue, Freddy, and Angela, at Arnold’s Wildlife Rehabilitation Center and I drove back home to have another experience. The fortune cookie I got several weeks ago that said “Your life is becoming more and more of an adventure” is definitely true.