I was so excited about my visit to Arnold’s Wildlife Center the past 2 trips which were Mother’s Day and the Saturday after it, that I came to the county library to upload a photo album and write a story.  I did upload all my photos into an album, and after the picture with the peacocks in the tree, which is after the pictures of me and the baby Caracal and Serval, I added pictures I took at the wildlife center in December 2012 so you could look at all the pictures in one place.

On Mother’s Day I took my mom Florence on a road trip to Arnold’s Wildlife Rehabilitation Center in Okeechobee, Florida.  I have been there a few times before and I always enjoy my time there. I also always learn about different animals and how important it is to take care of them so they don’t become rare and endangered.  Many animals that Sue Arnold has at her wildlife center are endangered species. It’s really a shame since they are such beautiful and special animals.  Over the past several years that I have known Sue, I realize more and more what a special lady she is, and also how strong her spirit and strength are, non only physically, but also spiritually.Sue’s daughter Chrissie died 4 years ago from cancer, her husband Clarance this past December, and her daughter Angie is fighting cancer now. Sue says that the animals are what keeps her going. They give her a reason to live and the unconditional love she gives to the animals is evident. The butterfly garden was started as a healing for Sue after Chrissie’s death.

Shortly after we arrived on Mother’s Day, there was a really hard rainstorm so we were not able to spend much time outside looking at the animals. The two pet deer did come up to us and I was able to pet them, although they were very wet, which did not bother us in any way.

While it was raining, Sue took me inside and a very big surprise was waiting for me. Sue showed me a 4 week old baby Serval and a 4 week old baby Caracal.  It was love at first sight for me. They were absolutely adorable.  Then I received a really big surprise, Sue let me hold them.  I felt so honored and special. I would never have even dreamed that someday I could hold baby wild cats… they were so soft and cuddly. 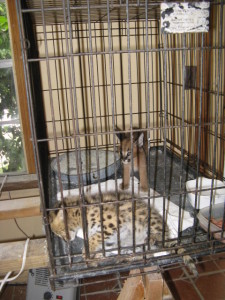 As the rain let up, mom and I left the wildlife center and drove 2 hours back home. My friend Pam said she was up for a roadtrip, so this past Saturday, May 18th, Pam and I drove up to the wildlife center, it was supposed to be a nice sunny day, and when we left home it was raining, but the rain stopped when we were partway there, and it turned out to be a beautiful day.  When we arrived, what a wonderful surprise we found. 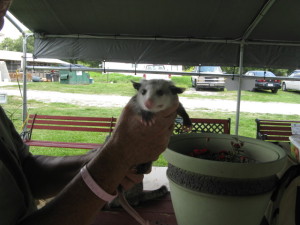 Sue was holding a baby opposum, and her friends Trudy and Barbara were there, and they had their 5 week old baby marmoset monkeys with them. Evidently, one of the resident marmosets had twins, a boy and a girl, and Trudy and Barbara adopted them.  After sanitizing our hands, we were able to pet them. They are absolutely the cutest, softest, adorable babies.  They are very small at this age. Full grown they get to be about 2 pounds. I think their heads now are smaller than a golf ball. You will be able to judge their size in some of the photos. 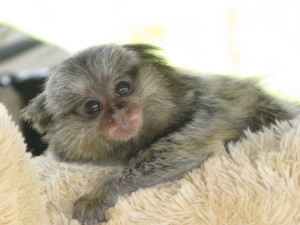 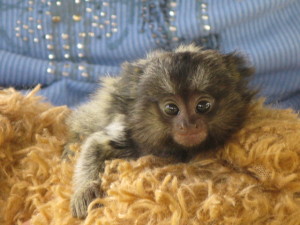 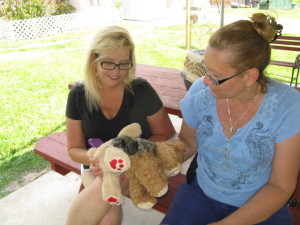 After we visited a while, and of course almost got our fill of admiring the baby marmosets, we went to lunch at a local restaurant. It was really great getting to know each other. Trudy and Barbara told us stories about raising their marmosets.  Barbara has one that is a year old so we got to see pictures of him wearing clothes for the first time, learning about his behavior, and the cute things he does. Lunchtime was a great time for sharing our lives and learning much about each other. It turns out that several of us grew up in New Jersey so we had that in common, besides our love of animals.

After lunch, we went back to the wildlife center and Pam and I got a tour of the grounds.  I’ve been there 4 times now, but this was Pam’s first visit. Every time I come I see new and different animals, exhibits, etc. It’s a place of wonder and education for me, as well as for others. If you get a chance, it’s worth the time to visit. You can also check out the website at www.arnoldswildlife.org, and www.arnoldsexotics.org.

A new addition we got to see are the Spicifer Java Green Peafowl, from Java, Indonesia. There are very few left in the world, but there are a few breeding pairs in the US. They are highly endangered. Evidently, these came to Sue when their owners were caught illegallyhaving them at their residence. They are absolutely magnificent birds. 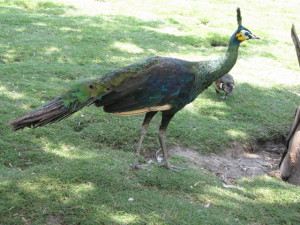 We then explored the impressive butterfly garden. I couldn’t get a picture of the entire garden in my camera lens at one time, even from the viewing platform. The garden is , shaped like a butterfly with it’s wings open. There are so many different plants, trees, shrubs, all to attract or host butterflies and hummingbirds. In the picture of fingertips and leaves, at the right side of the top finger if you look carefully, you will see a little speck, that will be a butterfly. 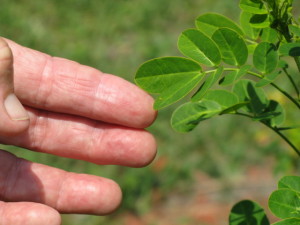 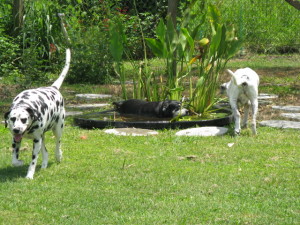 As we were walking through the butterfly garden area, I looked over at one of the lilly ponds and one of Sue’s dogs was laying in it cooling off. He was really enjoying laying in the water.

After we finished with the butterfly garden, we went into the nursery in the house and we got to see the baby Caracal and baby Serval. I couldn’t tell that there was much difference in size since I had seen them 6 days before.  Sue said that we could hold them if we wanted, and you know me, of course I wanted to. I had a snuggle and love fest with these two adorable and cuddly cats, separately of course.  While I cuddled and held them, Sue and Pam took pictures. The Caracal was a bit calmer and let me just snuggle up close, I even got a kiss from him. He was okay facing the camera and other people. 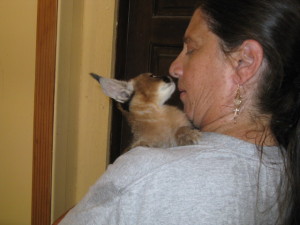 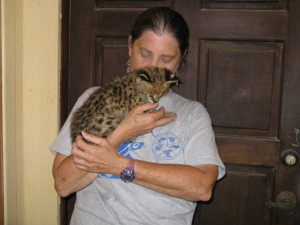 When I held the Serval baby, she liked to be held, but kept wanting to turn her face away from the camera. I turned around so her face could be photographed, but she kept turning away.  They still got some good pictures of us together.  What a joy it was for me, and I think Sue and Pam liked taking the pictures. I’m guessing when Pam got home from our trip that her 2 dogs, Eli and Layla, really sniffed her wondering what she had been up to that day.

We took back roads traveling to Okeechobee, and it was very relaxing and enjoyable. We’re hoping to go back for another visit sometime in the near future.  Check out the photo album for Arnold’s Wildlife Center to see the pictures.