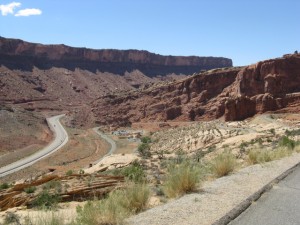 Road into and out of Arches

I arrived at Arches National Park this morning.  For about 30 years I have wanted to visit Bryce, Zion, Grand Canyon, Canyonlands, and Arches.  Today with my trip to Arches, it completes the 5 National Parks that Don and I wanted to explore but never did.  When the hummingbird flew and looked in my window yesterday morning, I knew it was a sign of spirits that are with me.  In Texas we had hummingbird feeders out and we would sit on our back porch and watch them.

Anyway, other than being 102 degrees and very hot and dry, it is an amazing park. The drive up the mountain into the park was very steep and it had sharp switchbacks going up the mountain.  I was able to take the picture shown above which is looking down into the bottom of the canyon towards the exit.  They are not visible, but there were vehicles on the road.

I drove all the paved roads in the park and stopped at almost every lookout and point to take pictures. I also walked some of the shorter trails so I could get photos.  Delicate Arch which is one of the most popular ones could be seen from the parking lot. There was a 1.6 mile trail leading up to it which I thought I would skip since it was 102 degrees.  I drove about a mile further to the lookout and there was a .5 mile path up the mountain to it, so I did that one.  There was a little better view.  If you look closely under the arch there are some people standing under it.  It shows the size of the arch. They must be the people that took the longer path since we were on the other side of the canyon from it. 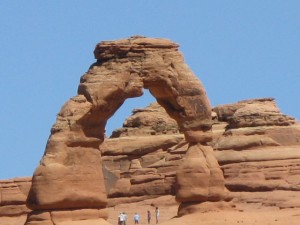 Delicate Arch with people under it

I took so many pictures, which is easy to do with a digital camera.  My batteries ran down, and I had 3 sets with me.  Before I left home I bought a small inverter to plug into the 12 volt in the dash, so I was able to charge the batteries a little while I drove around the park.

There were so many beautiful and amazing rock formations each one more magnificent than another. 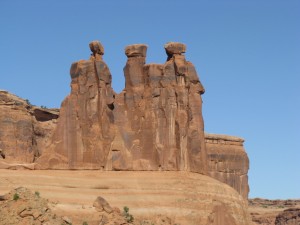 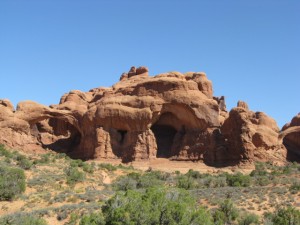 Most of the time there were no cars behind me so I could stop along the way and take pictures. If there were cars, I would pull over when I could and let them pass.  I was able to take pictures of most of the arches that were a reasonable distance from the parking lots.

Balancing Rock is another famous formation, it was just a short walk from the parking lot. 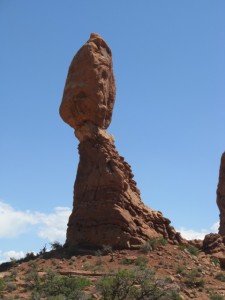 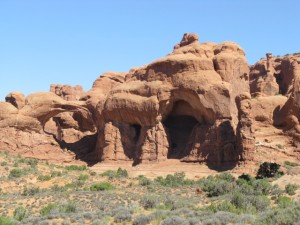 I walked partway to Double Arch which was really magnificent and if you look you will see people under it which probably show as specks. 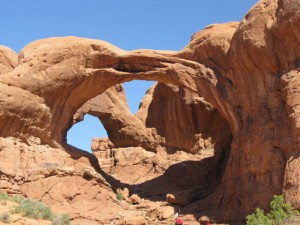 When I got to where Devil’s Garden Trailhead was, it was almost 2 p.m. and way too hot to be walking a distance to the arches.  I wanted to see Landscape Arch which is the one that is the length of a football field and fairly narrow, but it 1.6 miles and I wasn’t up to the challenge.  So, instead I took some pictures of the beginning of the paths into that area where there were several arches and trails that were up to 7.2 miles one way. 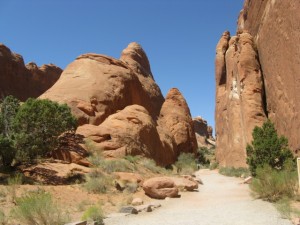 My body was beginning to feel the fatigue and heat and get sore inside, so I decided after seeing so many spectacular sites and being able to walk several easy trails, that I would go to the visitor center which was on my way out of the park. Then I would find a campground for the night and eat dinner.  The campground in the park was full, however, there were some campsites along the Colorado River about 10 or so miles outside of the park.

I drove the road along the river, which was in a canyon and very winding but beautiful with the red rocks on one side and the river on the other.  There were several campgrounds with different names. They were all primitive sites and some were made for tents it seemed.  I found a campground called Hal Canyon, which had 11 sites and since my dad’s name was Hal, I thought it appropriate.  I checked the sites and found one in which I could see and hear the river.  I paid the fee, and set up camp. It was 95 in the camper so I opened the windows.  My fridge was running really hot I could tell be touching it. 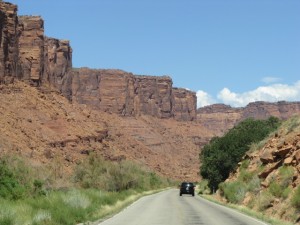 Colorado River along road on left

I have a small thermometer and I saw the tempurature rising inside to 105 so I decided that was enough.  I found a campground about 15 miles away in my Passport America book and called and they have spots available with electric and water, so I broke camp and drove the 20 minutes to the campground. I saw lots of RV parks along the main road through Moab, but most of them had no trees and it seemed that I would be able to hear traffic.  I don’t know what they charged, but most are probably about the same. At least with PA I would get a bit of a discount.

After arriving, I found a spot at the end of a row that had a few small trees, most of the land here doesn’t have trees, probably because it’s desert.  Anyway, I plugged into the electricity and turned on my air conditioner. I seldom use it since it was not very hot before arriving in Utah and I like the windows open to get fresh air.  Anyway, the AC was working fine for a while, they I could hear a click, I’m guessing it is the compressor kicking off and then warm air would blow for a while. Then cool air again, then the same cycle.  I got out the portable fan I have and plugged that it.  It did not cool things off much. It’s 9 p.m. as I am writing now, and it’s 90 degrees in my camper. I was going to turn off the AC and open the windows but before it got dark I looked at the sky and it was black and stormy. I saw at the park that they had a prediction of 30% showers for tonight and tomorrow.

Also, as I was driving in the parks the last 2 days, my engine or transmission was making some kind of noise, at first I thought it was because I was driving up steep mountains.  But then it was doing it on level roads.  I have a feeling it is spinning or something before shifting into gear.  I will be in Moab until Monday or Tuesday since I needed some more medical supplies and they were sent today and will take about 5 days to arrive here.  So tomorrow morning I will ask at the campground office if they know of someone to check my AC and also a mechanic to check my van.   I hope there is someone to check these for me. Moab is a small town, and if they don’t I will have find somewhere along the way to get these checked.  I sure don’t want to be without AC in this 102 degree weather.

There is a lady named Cathy that lives in Moab. I met her in 2005 when I was at the Zion Flute Festival at Zion National Park.  We have kept in touch periodically the last few years and I asked if I could have my package sent to her.  I called her when I arrived and I am going to try and stop by the gallery where she works to see her.  When my package arrives Monday or Tuesday I will meet up with her and then be on my way south towards Mesa Verde National Park in Colorado.

I’m hoping if I need repairs to the AC and engine or transmission, they can be made here while I’m waiting for the supplies to arrive. Cathy said since there are so few mechanics in town that they work by appointments and they are scheduled 7-10 days out already. She said if it’s something major she has had to drive 2 hours to Grand Junction, Colorado to have them made. I sure hope that’s not going to be my experience. But if it is… well it is…

I’m making sure to drink lots of fluids and some sports drinks with electrolites so I don’t dehydrate.  It’s a dry heat here, but it’s still HOT!!!

This RV park has wi fi, so I am sitting in my camper and updating this blog and photos from the last 2 days. I will let you know what happens if I am able to get my AC and van checked. If not, I will have to get it done down the road next week and hopefully all will be well until then. Intermittent AC is better than none!!!